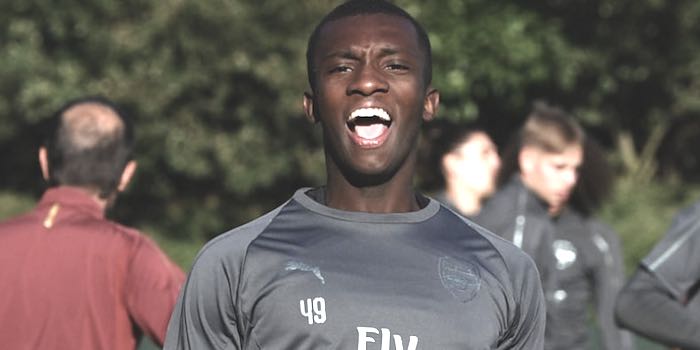 Eddie Nketiah says he wants to stay at Arsenal and fight for a first team place rather than head out on loan next season.

When a January loan move to German side Augsburg was vetoed by Unai Emery it looked like the striker might get more game time given he had only Alex Lacazette and Pierre-Emerick Aubameyang ahead of him in the pecking order.

While he did grab a first Premier League goal on the final day of the campaign, it was still disappointing that he ended the year with just three first team starts.

Despite Charlton reportedly showing an interest in signing the England under-21 international, Nketiah says he has unfinished business at the Emirates.

“My ideal scenario is to be playing here, I want to play here next season but we have got to see how that goes,” he told PA.

“I am confident enough in my ability that I am good enough to play here so I have just got to work hard and show the manager that I can.

“My aim is to play for Arsenal, that is my goal and has been my aim since I was a kid.

“It is great to have two of the best strikers in the world around you and learn from them every day. I’m just progressing, trying to catch them and make the gap smaller and smaller.”

Nketiah is one of a number of Academy graduates who are knocking on Unai Emery’s door. With Freddie Ljungberg set to facilitate the transition of youngsters to the first team, he’s backing other kids to turn the hear up on the established stars.

“I think it is really important, over the years it is what Arsenal have prided themselves on, having great youngsters coming through the academy,” he added.

“I think the bunch we have right now, me, Joe Willock, Reiss and the other boys, we are good players for our age and we just have to keep pushing and why not?

“I think the fans would love to see a lot of the young boys in the team week in, week out so come the start of the season, we will all be pushing to get in the team regularly.”

Psst. Eddie. You do play for Arsenal.

Free Welbeck replacement. We would be stupid to send him out on loan

Making all the right noises, good luck to the fella.

Jumped on the newest thread to comment on all the Stan bashing going on. He has only had 100% of control of Arsenal for a matter of months. Would you invest £100 million into a company you only own about 60% of, effectively giving away £30-£40 million??? No you wouldn’t, nobody would!! Judge him and KSE over the next few years…. this is the first summer KSE has had full control and benefit 100% from any increase in Income and Value. I’m not Pro KSE, nor Anti-KSE, I will judge in the next few years. The guy is a very… Read more »

Stan is that you? If so spend some damn MONEY!

You are obviously a paid troll. You sound exactly like Robbie who is clearly on the books.

Judging by Swiss Rambles excellent appraisal of the club’s current financial state, Eddie is our Welbeck replacement.
I for one hope that Eddie Nketiah and a good few of the other young lads are given proper game time during pre-season and then picked on merritt. We’re only going to know if these lads are good enough by giving them decent minutes in the first team.
And we’d all love a home grown striker to come through the ranks and become an Arsenal Great.

Can Nketiah play wide? Or is he just an out and out striker?
If we can break Palace down? And get Zaha for a decent’ish price? Then as much as I admire Nketiah’s attitude, I can’t help but think 40+ games in the Championship or League 1, would do him much more good, than continuing in our under 23s and sitting on our bench.

On pro.. no wonder hes your top scorer. You could stick Leno up front and hed be top scorer

And this is real life. While we’re at it why don’t we get Unai to unlock legends like Pires, Viera, and Adams………

Occasionally… Hopefully he gets.more chances this year now that Welbs is gone (which he kinda was last season as well). He needs more gametime be it with us or elsewhere . I think he is very under rated I think he does a lot of good things that shows a maturity his movemovement and work rate is very good..even when the likes of ESR and Willock have grabbed goals I think his movement has layed a lot of the groundwork on the immature side I’d say he perhaps tries too hard to make something happen or to Get a goal.… Read more »

Loving his attitude. That’s what I like to hear.
Kid is talented as hell, I don’t want Emery to make him rot on the bench when there are cup and Europa games for him to play.

If he was an old lag from the Iberian region, Dick (emery) would love him!

Credit to him for backing himself. Exactly the kind of fighting spirit we need. I hope if he does stay he gets some much needed rotation appearances. He should be getting at least 5-10 starts this year especially in EL!

He has to play in the Europa league this season otherwise it’s pointless not loaning him out at least until January. He needs the playing time to find his true level and can’t keep kicking around in meaningless U23 games.

They’re not meaningless…but I take your point.

I had much rather give Eddie minutes on the wing than some journeyman 29 year old on a free and high wages.

I like this kid’s attitude. He has the desire, hunger and fire required to make it at Arsenal. Let’s hope he gets what he wants, what we ALL want.

This guy has some real sauce to offer us. Please give him a chance. A close look at gnabry and the Jeff fills me with some regret at the way we managed them. We didn’t guarantee their futures and sold them for peanuts and now their stock has risen considerably. We can’t keep making these mistakes especially now that we are cash strapped.