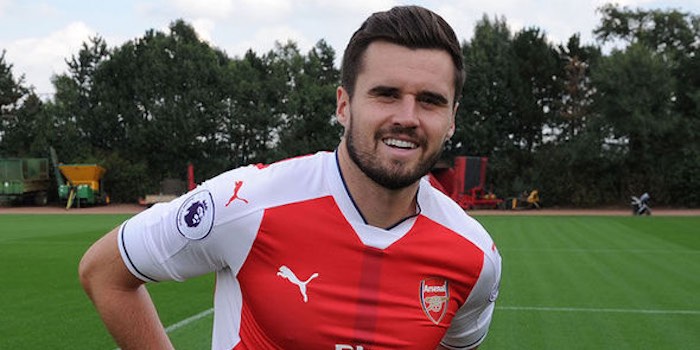 Earlier today it was confirmed that Carl Jenkinson’s eight year Arsenal odyssey was at an end.

The 27 year old has joined Nottingham Forest on a permanent basis in a deal said to be worth around £2m (with a sell-on clause).

We all know Carl’s a Gooner, so it had to be have been a wrench for him to leave the club he supports, but he took time to send a message to fans via his Instagram account.

“This is a message that is hard to write so I’m going to keep it short. I’m leaving Arsenal in pursuit of a new challenge and a fresh start, and ultimately to play regular football again.

“I can’t really put into words what it has meant to me to play for this club, but what I can say is I have truly lived my dream. This brings me to you, the proper Arsenal fans, as I have lived your dream too.

“It has been an up and down journey for me but I hope you all have seen how much it has meant to me and know that I have given it my all. I have played 70 games for Arsenal which if you told me I would do as a kid I would’ve laughed at you.

“I take many great memories and friendships from my time at this special football club, and it is a chapter in my life that I will cherish forever. I see a great future for this club under the current manager and coaching staff, and I look forward to seeing this unfold.

“As for now, I’ll take my seat back in the stand, as a fan, with the rest of you.

What a guy, let’s hope he can get things back on track at Forest, and maybe our paths will cross again on the pitch one day too.

Good luck and thanks for the memories Corporal!

Legend? Yeah, fuk it, ARSENAL LEGEND! Because he did what we all dreamed of. And did it right!

I felt Jenko got quite a lot of unfair criticism considering he hardly played and was a massive Gooner. I always liked him personally, as he was kind of a throwback to a die hard player/fan you would get in the 80’s/90’s era. Decent work rate, could tackle and was alright in the air. He could deliver a decent ball from the right hand side as well. Would run through a brick wall for the Arse. He wasn’t actually that bad. Seriously primitive I know, but fundamentally he was alright. I honestly think that injury he picked up during his… Read more »

He never got a Perry Groves song for himself.

I agree. He also never made any glaring mistakes in his recent games for us. I did not really have an issue with his name on the team sheet.

Every now and then I fall apart

he went from carl anxious jenkinson to carl corporal jenkinson!! he truly lived the dream, i would also be so nervous as he was the first games he played for us..

Good luck Jenko. Also did you hear anything about any incoming CB?

We salute you corporal

I seem to have something in my eye

What a class act, respect Jenks

Totally agree, very classy. Wish the wanker capitan we had all these year could have and not make a video to take the great Arsenal shirt off.

Best of luck, Jenko. Nobody ever doubted your commitment and Forest is getting a top notch work ethic dude.

Love for club and fandom is overrated mostly but this right here is a proper gooner & fan, pure love for the club after his heart.
Wish you success in your career jenko, thanks for everything.

We love you too Corporal.

Kind of fitting that he’s joining the club that gave us our red shirts in the first place.

A total eclipse of the heart

Wouldn’t be that surprised if Jenko actually gets to read these comments. A beautiful statement to close the chapter. Thank you for everything, Carl!

THAT is how you send a goodbye. Something for Koscielny to learn from.

Thanks Jenko and all the best at your new club.

Jenko will be unveiled in a Forest shirt, then take it off and he’ll have his Arsenal kit underneath.

I think he actually has an Arsenal Kit tattooed on his body!

Gets himself a Face App that superimposes Arsenal player faces on his teammates.
“Alright, Auba?”
“…my… my name’s Sammy, mate”
“Yeah, that’s flames bruv”

Top Bloke, I’m sure he’ll be back at the club someday in some capacity. Can you imagine Jenks doing the stadium tour, that would be fucking hilarious!

What a lovely thought.

“…and this is my seat, and that’s my mate Alan. Anyway, nice to meet you, I’m off for a quick slash before the second half starts”

Here’s hoping we see you in the North Bank one day soon Carl.
Wishing you all the very best at Forest and for the rest of your career!!!
Thank you for all that you have given for our great club.

Now that is how you leave a football club.

Not a bad word about the kid. Wore the shirt for us. Bagged a goal for us and lived it with us.

No way near as bad as people made him out to be. I think he could’ve offered decent backup to Bellerin. Instead we’re left with Maitland-Miles who is a square peg in a round hole and doesn’t even want to play in that position.

And that is a message that is one of the most honest yet exhilarating in the way that he has no regrets. I honestly believe that even if he got to only play one game for us he would still have had more class than that prick Koscielny. All the best to you Jenko. Hope to meet you in the stadium between the fans.

That’s how you leave the club Laurent

I love this guy!

I wish you the best corporal.

Bravo. A class way to sign off. Good luck to him.

Good Luck to him. Had his struggles but left the club with his head held high and a top class farewell statement. Unlike our recent Captain!

A touch of class from Carl….

A total eclipse of the heart……
Best of luck Carl

Good luck for him! I believe he is one of those players that not fan of our club can dislike, the guy breathes and lives Arsenal, and that’s exactly why I’m sad to see him go! Good luck in your new journey Jenko!

Pure class. Thanks for everything, Jenko. COYG!!!

Love Jenko and would have love to have seen him succeed with us (what with being a Gooner and having played for the same club as I did way back in the day, Eastbourne Borough formerly Langney Sports) but by telling Palace to fuck off he goes straight into an Arsenal legend for me. Good luck Corporal and may you have a good career at Forest.

Wish him all the very best in his footballing journey. Lovely heartfelt message – don’t you think Kos?

Best goodbye message EVER! I’m not crying, I’m not…

This was lovely!! Best st of Luck Corporal hope you make it back to the premiership so we can sing your praise.

Too class man, top class farewell!
Better player than given credit for, too unclucky with injuries at times.
Best of luck Corporal Jenkinson!
Hope you return to the club at some point, in some (any) facility.

Funny how Jenkinson will be remembered more fondly of than Koscielny now. Never saw this coming.

What a f*cking Dude!

I’m not crying, you are crying…I workout.

Good luck with your career. You lived our dream. Hope to see you again soon. Top farewell. Onions…

This is what I love about Jenks. If we, fans, would have played for Arsenal, we too would have written a similar goodbye message. Gonna miss you Jenks, wishing u all the very best. Thank you for the memories!

Yeah, a real nice touch!
All the best Jenks. I hope it goes well for you at Forest.
For what it’s worth, I was always pleased to see you on the team sheet, and thought you did a stellar job for the team.
One heck of a cross!
Top man…

Underrated player and top lad. Good luck Jenko. You are one of us.

Always liked Jenkinson, never thought he deserved the stick he got, he just wasn’t developed

Much ado about nothing. No diff imo between his message and Koscielny. Arsenal fans are too sensitive and petty. Don’t see anything to take offense with with Lolo’s shirt swap. Nor do I think he has been disrespectful rather the other way around, the club has been disrespectful to Laurent a player who has laid his body on the line countless times for us by making it difficult for him this summer. he rightly should want to move on as he is suffering wear and tear issues yet the club wanted to take short cuts, point at Saliba for the… Read more »