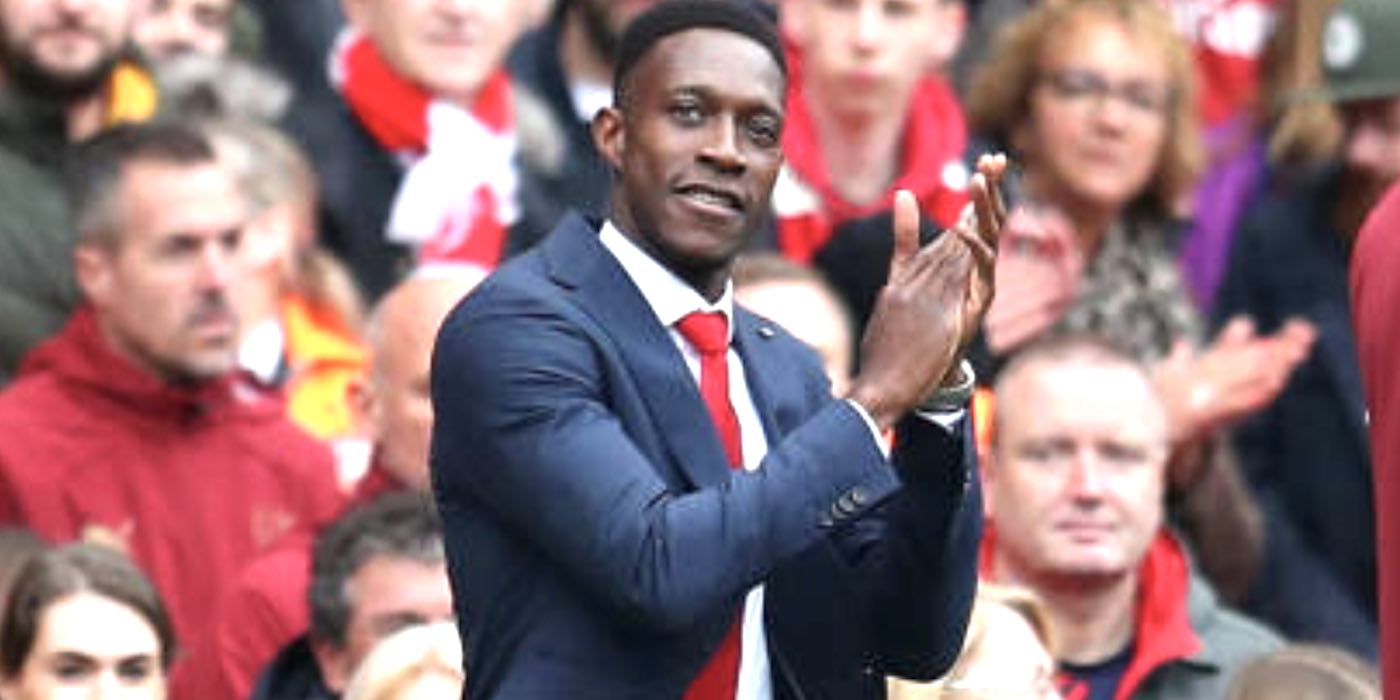 Watford have confirmed that they have signed Danny Welbeck on a free transfer.

The England international was released by Arsenal in July after five years at the Emirates during which he scored 32 goals in 126 appearances.

His spell in N5 was marred by three serious injuries. He suffered two ACL injuries in the space of a year and missed much of last season after he suffered a horrible ankle break against Sporting Lisbon in November.

It wasn’t all doom and gloom though. In March 2015 he got on the scoresheet in a very satisfying FA Cup win against former club Manchester United at Old Trafford.

And, on his return from his first big knee injury on on Valentine’s Day 2016, he netted a last-gasp stoppage time headed winner against Leicester City that sent the Emirates absolutely bonkers. Good times.

Danny was a very popular figure in the dressing room and on the terraces and seems like one of the game’s good guys. We wish him the best at Watford.

Hopefully, his cojones will have grown back enough to satisfy Troy Deeney. *Cough*

Good luck Danny, all the best !

I literally cried when he scored that goal vs. Leicester.

I agree he deserves some good fortune in his career!

Good luck and a good club to go to.

Hope the injuries sort themselves out (though not when you are playing against us).

Yup a good move for Danny. Wish him all the best.

So much stuff happening. Gasping for breath!

Much more fun than all those long, dry, tumble-weed, windows of summers past, partner.

A very decent free transfer signing for them. Hope he does well, deserves a run of good health & luck.

Always liked Dat Guy. Hopefully he can stay fit and show what he can do (without the inevitable goals against though, please).

Good for Welbs but now those c*nts will be even harder to beat luckily we havr made some serious reinforcements going forward.
God luck webs stay fit.

Seemingly one of the genuine nice guys in the game. Hopefully he is free of serious injuries for the rest of his career as he has already had more than his fair share. Thanks Danny for your service to the club and all of those various body-parts goals you scored for us!

A good signing for Watford and welbeck. Still think he could have been an option for us this year

He’d have been restricted to garbage time and cup competitions, given the top-heaviness of the squad now. This is good for him; he’ll get a lot of meaningful minutes. Classy guy and player.

Decent signing, most hard working front line in the league. Hopefully remembers which training pitch to rock up on 🙂
On another note, are the bloggers currently scrambling around for news on David Luiz….

Absolutely would have loved to keep him if it weren’t for his injuries. Great utility frontman for a Champions League team.

Will give me a good reason to cheer Watford on when they take on the other top clubs this season. Go on Danny

Always wondered why it gets reported this way… why is it a free transfer if he was already released? Surely he hasn’t been transferred at all. He was let go and has now signed for another club.

If it was a free transfer, we would have the option to insert things like a sell on clause etc.

Yes, his contract was not renewed so he became a free agent, able to sign for anyone who made an offer to him. I don’t understand why some Gooners are giving negative votes for your post, it’s just a statement of fact – no reflection on the player at all. Very odd.

All the best, Danny.

Just to show you how clueless the media are, one of the newspapers has “Watford complete loan signing of Danny Welbeck from Arsenal”. :smh:

Really pleased he’s found another club and very surprised he didn’t get a move sooner.
I wish him all the best. Shame he has to be in a team with that thug Deeney.

Good luck to him. He’s been on a journey – from Man Utd to Watford, via us, and still only 28!

Good Luck to him, hope all goes well!

I dislocated my knee celebrating his winner against Leicester and now have a new ligament thanks to him, it was worth it. I wish him all the best at Watford.

I’ll be seeing you guys around I guess ?

Agent Welbz off to two-foot Deeney in training.
Always liked the guy during his time with us. Agree with other comments, he deserves some good fortune.

So many goodbyes… All the best Welbz. Wishing you the very best as you were a model pro when you played for us. Hope the injury gods are done with you. See ya around.

One of my favourite Welbeck moments when he went ballistic on Danny Rose. There was definitely some story behind the incident because normally our Danny doesn’t get into them things.

Excellent news.
All the best Danny.

Good lad and deserves a run of luck. Took some of my kids to that Leicester game – genuinely thought we were gonna win the title after that winner. The noise afterwards was tremendous and one of my daughters, then a week shy of her eleventh birthday, declared it the best day of her life. Thanks Danny!

Right choice Danny. All the best.

Best of luck to Danny.

not sure if we are getting rid of him a season too early to be frank, he provides a physical element we don’t quite replicate in the rest of our strikers. John Jules (JJ) has the potential with his physique but still too early.

Martinelli I suppose can audition but again not quite the sort of bruiser off the bench you want to lump in last 10 minutes chasing a game who we can go direct with.

I don.t get why he walked out on Arsenal to join Watford..is it really all about the money? Or did Arsenal hiven him a gentle nudge?
He may get more game time but he would have gotten much more with us than he did had he been fit

All the best Danny. Teach them a thing or two about cojones.

So sad that he had so many injuries. Could have been a great player for us.