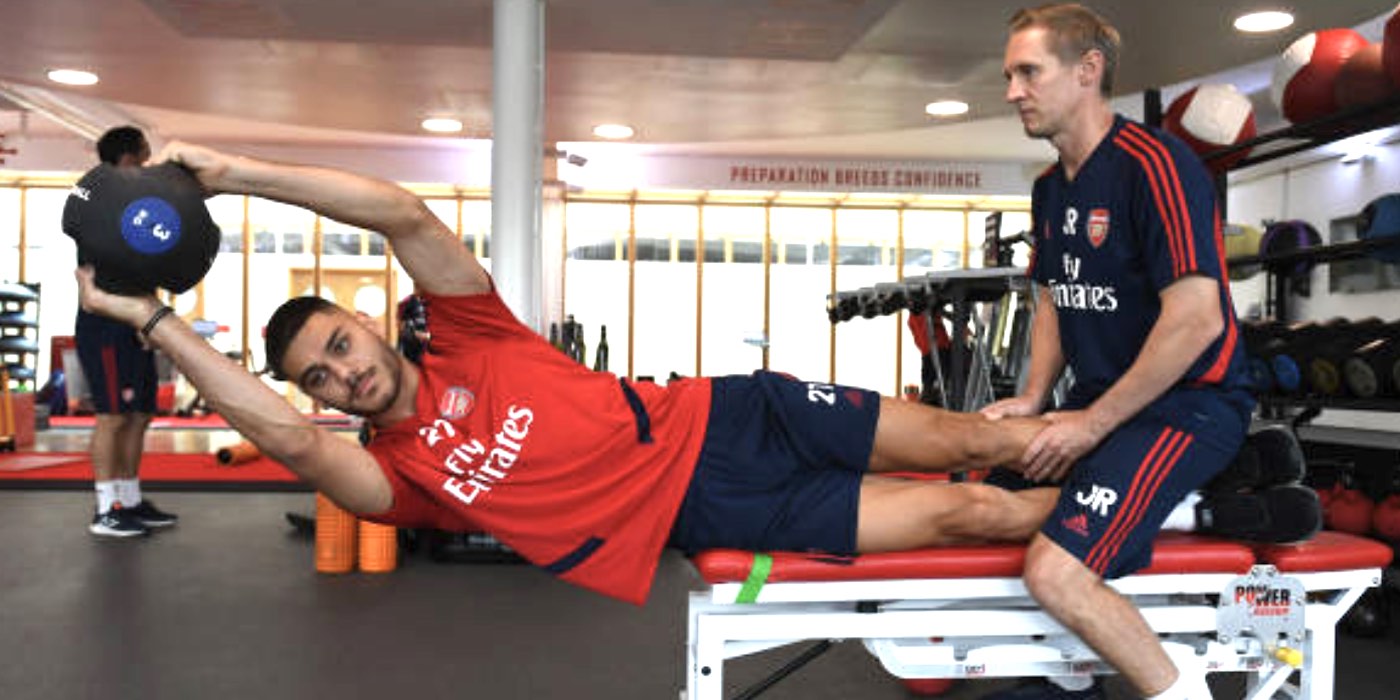 Dinos Mavropanos will be out of action for up to eight more weeks as he battles a recurrence of the groin problem which plagued him last season.

The Greek defender played no part in pre-season due to the problem, and now faces another spell on the sidelines before he’s ready to play. It also scuppers the possibility of a loan move before the transfer window closes.

Beyond that decisions will be made closer to Sunday over the participation of Alexandre Lacazette and new signing Nicolas Pepe.

The Frenchman is suffering with an ankle problem that has bothered him throughout the summer, while the former Lille man is only just beginning his physical preparation having been on holidays following the African Cup of Nations.

Rob Holding and Hector Bellerin are continuing their rehab after cruciate knee ligament injuries last season, while Emile Smith Rowe is close to a return from a groin strain.

New signings Dani Ceballos, Gabriel Martinelli and David Luiz are all in contention for a place in Sunday’s squad, but Kieran Tierney will miss out due to injury.

Unai Emery will update further at his press conference this afternoon, and we’ll have all the news for you right here.

Arteta: ‘Incredible’ Holding is growing in every aspect

Have we at any point had proper details of his long running injuries? It seems to always be a vague groin problem that lingers

Having had a groin strain like three or four years ago, I know that I had at least six months of different problems originating from that single injury. They cause each other, those muscular strains…

I hope he can come back and get some game time.

If only Dinos didn’t play for us. Eight weeks out? We would totally loan the shit out of him.

I have seen this guy play a total of 1 game since he’s signed for us. And in he didn’t even last the whole game as he got a red card. So that’s basically like in total probably about an hour of game time he’s played for us in a proper competitive game. Like wtf?

When he signed did he do a medical? Cause this is ridiculous. It’s like we just got this player from somewhere and basically we’re paying to treat him of all these injuries cause it’s not like he’s not being paid right??? Who’s idea was to sign this guy? SVEN MINSLAT???

Can’t wait for Bellerin, Holding and Tierney to be fit

Dave
Reply to  Keeping it Monreal

Crazy how long we’ve not had a fully fit first choice defence.

I think we might have to brave it out until everyone gets fit again. Question marks over so many players. 8 points from first 4 games would be great. And I don’t care how we get them…

Liverpool and Tottenham with a weakened defence. Hell yeah I’d take two draws. I’m all for optimism but this side isn’t hugely different from the one that couldn’t win a single game at the end of last season. Manage expectations dude.

yup, i’d bite your hand off for 8 points from a v tough opening set of fixtures and without bellerin, tierney and holding, which is 3/4 of our defence!

Agreed. I think we’ve got a great chance of top 4 but Liverpool and Sp*rs are still a fair way off. Getting anything in those games will be a bonus without a fully fit team.

Really hope fans like Eternal don’t expect the world and immediately kick off when we remember we are still a work in progress. David Luiz is a shrewd signing but he’s far from the answer to our defensive woes.

The more things change the more they stay the same.

I’m guessing it’s going to be Willock, Xhaka, Ozil, Mkhi, Auba, Laca in midfield / up front for Sunday. Hopefully Pepe gets a cameo in the second half.

Would rather see Nelson over Mkhitaryan ideally

Can see Guendouzi getting some minutes

I doubt Laca will start, if he still has this ankle issue. At best, I see him on the bench.

Wtf is up with Macro’s goin

Mavro too injury prone. Send him back to Greece when possible.

He’s a crock, get rid, panathanaikos or something. Palace, that sort of thing

He’s really needs to get fit and show quite a bit this season, otherwise we should just move on. He’s 21 and has pretty much played no first team football. And, when he has, hasn’t exactly looked that great. Here anyway.

Agreed. A decision should be made on this guy this season. A lot of the clamour for this guy was because he isn’t Mustafi. Is he actually any good? Let’s see.

From what we saw of him last season, I have doubts over whether he can cut it in the PL

What exactly is happening in that photo?

Mavro is just standing up normally and the pic has been rotated for comedic effect.

How long left on his contact? He’s practically stealing a living

@Toolsy
Akin to asking: How old are you? Your practically stealing air.

My groin, along with a lot of other things, would snap if I tried to do what he’s doing in that photo

Looks like what he’s doing in the picture did his groin again in the first place.

It’s getting a little more worrying with each injury lay-off. He’s only a young player and I fear we’re seeing shades of Wilshere again – although I hope not! Let’s wish him well but his long-term future at the club must be under some doubt unless he can regain full fitness, and keep fit.

I notice that Nelson is not listed in the Arsenal squad or has a number, yet the last ones to come in are? What’s happening there, especially after the sale of Iwobi.

I fear that this news may make us hang onto Mustafi.

Throw in Smith Rowe and that’s a depressing lot of injuries to start a season with.

Still, at least three of the newbies are ready.

We should convert the communal shower at Colney to cubicles

Mavropanos will never develop as a player if he cannot get some game time. These recurring injuries are getting worrisome, and if they pop up again, it might be best to move him on.

He should take his time to recover and we should then send him on a strong loan. I wish we were more creative in market and negotiated with either Ajax or Liepzig to take Mavro on as a loan. Ajax we know we had an ally with Overmars and they were intent on selling Ziyech not for a high price. We could have thrown Mavro over to further make weight (being that they recently sold De Ligt) and get well schooled. Similarly Liepzig are a team strong in developing defenders. If we took Upamecano, we could have thrown them Mavro… Read more »

You and your DoF game you like to play. Mhki as make weight lol ask RBL to develop a player for us because he has shown at arsenal he has a better future than any of the young players that they have coming up in their ranks?