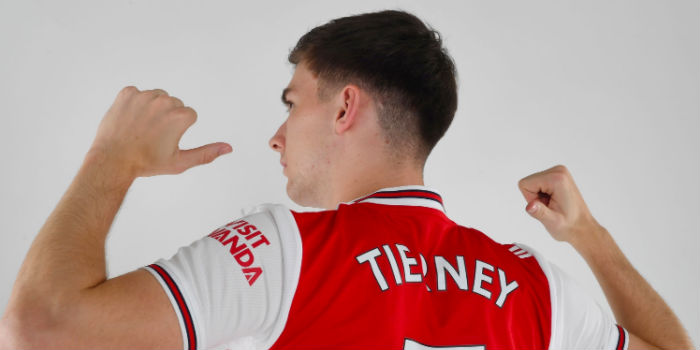 Arsenal have confirmed that new boy Kieran Tierney will not start training with the first team for up to six weeks due to his ongoing recovery from a double hernia operation earlier this summer.

The Gunners were well aware of his fitness situation before signing the 22-year-old from Celtic and he had no issues completing his medical at London Colney yesterday.

An update from the Arsenal medical team sees Tierney’s injury described as a groin problem and they state he’ll continue to receive treatment before integrating into full training in 4-6 weeks time.

When you consider he’s not had a pre-season, we could be deep into October before he makes his Arsenal debut. It’s not ideal given we’ve splashed £25 million on him, but we’ve taken a long-term view and still have Sead Kolasinac and Nacho Monreal to count on.

David Luiz has been passed fit for the opening weekend of the season, but there are issues with other members of the squad.

When he’s fit, he will be Like A New

He has Arsenal DNA

Not a problem. Given we have two fit, experienced CBs, I imagine we have brought him in with a view to using this season as an integration season. If we see him as our future LB for many years, then a slow solid start bringing him in and building him up would be perfect 🙂

Similar to a knee reconstruction, he has to have a groin relocation and put it behind him. Much more comfortable there.

We probably shouldn’t be running this story as there appear to be a few Gooners who think that mentioning injuries in posts is “negative”! I pointed out yesterday that, while welcoming Tierney, he’d be out for around six weeks through injury (not a secret, it’s been reported in the press). Wow, what a response from a few of these loons. I was being “negative”, blah, blah. Lot’s of negative votes etc. Well, guess what … he’s injured and out for up to six weeks! Unfortunate certainly, but it’s a fact.

That brought a Tier to my eye. It’s a MarvolousPun

Can’t wait to hear his name chanted at the Emirates. It’ll be like a new singing.

Got to trust kola now in this crucial opening month.

Hes got to be concious of the fact that Tierney is in to replace him. Let that be motivation for him to try and claim the lb position for his own amd really give Emery a headache when the new king of scotland returns to full fitness.

Despite the flaws to his game i think kola improved a lot last season.

They were talking on the arsecast about tierney playing around 60 odd games for celtic in consecutive seasons and given his swash buckling caladonian style he was bound to be on the business end of a size 13 boot from a ham hocked spl bandit on a few occassions I think youre right though to point out his injury record as a cause for concern and thats shown with his current injury. Perhaps it was a question of buying him now at this price instead of waiting till January when other clubs would be inevitably sniffing around like pack of… Read more »

waiting til January carried some risk, but we made our overtures very public and no one jumped in while our offers were rejected, so I do wonder where this massive competition comes from for his signature (unless you’re assuming clubs whose LBs get injured need cover – which is valid).

It doesn’t make it any less true of course, and some of our fellow Gooners appear to think that not mentioning it may make it go away. If only. But in the real world … well, most of us know it doesn’t.

I guess a move for him now was thought to be preferable to possibly missing out later on. You take a calculated chance and see what happens … as we’ll be seeing with Tierney in the coming months.

I know most here favor the signing, but was any other club bidding on him this summer besides us? I only ask because we faffed about all summer, giving any other side the chance to swoop in. Just curious what was the need to buy him now, rather than in January when we’d have the benefit of seeing how he’s recovering? I can appreciate at his age, a full recovery should be expected but failed to see the urgency knowing he wouldn’t feature for some time.

Clubs rarely sell their better players in the January window because they have the second half run-in of the season to come – and in some cases trophies to win etc. . Why sell them and possibly weaken the team?

Unfortunately, as “Rich” says in the post earlier, Tierney has a record of injuries – a long one for a young player – so he doesn’t look like he’s becoming more robust so far. I guess we thought better to get him now anyway than risk either a price increase or another club stepping in next Summer.

Tougher to buy in January, plus this allows our team of physios to get to work with him now. And maybe we can manage this recovery better than Celtic would, if nothing else than by not rushing him back. Who knows, maybe that’s part of his spotty injury history.

As a Scottish gooner, all I can say is that Tierney is on a whole new level.
This guy plays is committed, fearless, and top top quality.
Brace yourselves bois

This is another perculiar decision. I think the intent was always to sign Tierney on opportunity bc we had zero intentions of fixing Cback this season beyond pointing at Saliba for the future and Holding as a LANS. But Holding won’t be available for a while and Koscielny did us some favour trying to force the issue. Transfer team IMO was not sufficiently creative and we could not close the deal on targets so we scrambled in the end for a Panic BUY. Had this been Wenger in charge, we would have had a negative story, but since the same… Read more »

So a player we spent 3 weeks trying to buy is a panic buy? Someone whom we knew couldn’t play for a month a panic buy? Best Lb in the spl, panic buy? Years of CL Experience at 22, panic buy? Also the deal was done after our 2nd bid was rejected. “we’ve put in 2 bids but they don’t like them even though we’re are 99% there, let’s stop bidding until the last day of the window.. Because they have a new LB now so yeah.. They can be seen to let their captain go for a small fee… Read more »