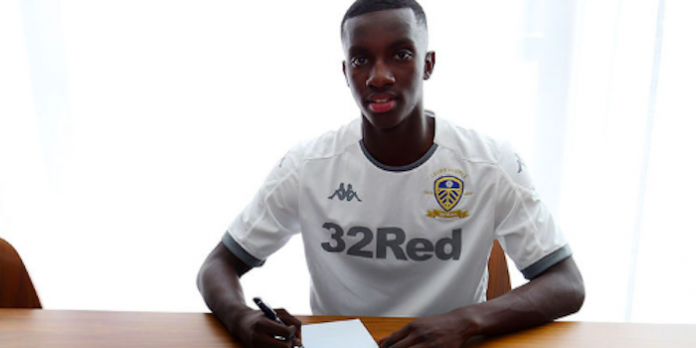 The striker needs to play regularly, and while he might have got some football in red and white this season, an entire campaign where he has to fight for this place can only be a positive thing.

The 20 year old spoke to the official Leeds site about his desire to make an impact following his move earlier today.

“I think learning under him will be great,” said Nketiah.

“He has worked with such great players already and helped them develop them and their careers.

“I feel like he is a very demanding coach and I am eager to learn and eager to improve so I feel like we will get along well and hopefully it will be the best matching combination for both myself and Leeds.

“It was a tough decision but I know the club is such a big club with a rich history and the manager played a big part as well – wanting to learn under him and the project of the club, where it wants to go, the direction it wants to go.”

still a better smile than frimpong’s when he was sold!

I’m really happy with this loan. Having lived in Leeds for many years and alot of my friends and family being Leeds fans, I think it’s the perfect club for Eddie right now. Leeds will push hard for promotion which will be great experience for him. I hope he scores a shit load of goals and Leeds get back to the premiership where they belong.

A difficult decision for Nketiah that became easier with the arrival of Pépé, who would presumably become Unai’s third choice center forward. He should do well to learn under Bielsa and hopefully continues to grow and round his game off well. I could see him becoming Aubameyang’s replacement in a couple years.

With Iwobi gone, Nelson and Nketiah should slot into the first team nicely next year, both hopefully with a decent bit of experience under their belts (Arse/Leeds respectively).

Can’t imagine many teams will fancy facing out current forwards. Untill January will give us an idea of the defence is good enough, a lot I feel hanging on Holding returning fit and well. Come on you Reds!!!

Hmm. I think I would have kept him in the squad this year…played him every cup and Europa league game and had him on the bench for a high impact sub if needed. The kid has fantastic potential and I really want him to make it at Arsenal and be our striker for years to come. Hope his Leeds stay does not turn out to be the wrong move for him.

Couldn’t agree more… also if we’re playing a front 3 of pepe laca auba (which I hope we will) I feel he would have got alot of game time in the prem as well all be it from the bench. Hopefully he can become a regular starter at Leeds and really push on this season.

As happy as I am that Eddie will be getting a full season of experience under his belt, I think we should have at least kept him through January for the carabao cup where we also could have rested our main attackers. If auba and laca happen to somehow get injured at the same time we would be in a bit of a crisis mode. I think emery is really flirting the line in terms of depth.

Playing for Bielsa isn;t the same as playing for Tony Pulis. Probably a very good move for Eddie and for Arsenal.

Not a bad coach to learn from for a year.