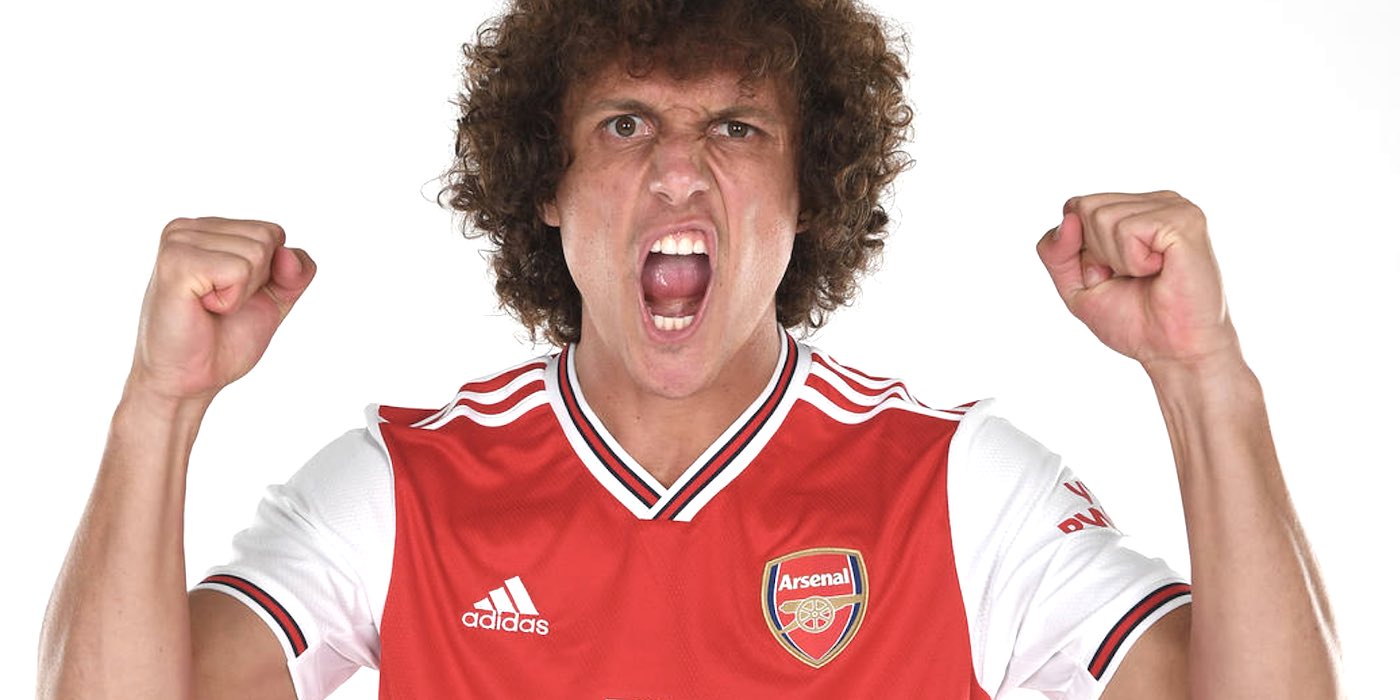 David Luiz says the fact he knows Unai Emery played a role in his decision to leave Chelsea for Arsenal.

The 32 year old left the evil racists to join the Gunners on transfer deadline day, and he could play a part on Sunday when we open our Premier League campaign against Newcastle.

Speaking about the move, he was asked about the Spaniard with whom he shared some time in Paris when both were at PSG, and whether not Emery’s presence played a part.

“I know Edu, I know Raul, I know the quality of the team, the players, and that’s what makes me excited to dream, to have the ambition to win big things.

“I think all my life, I’ve always started the season with the goal to win things.

“It’s not going to be different here – I’m going to come with this mentality because this is what made me move here.

“This is what makes me feel good every single day. I have to run for one reason, for one goal, and my goal is to win things with Arsenal.”

I think we can all hope that’s an ambition he achieves. And if not, the partnership with Sokratis should give us some moments as we head into a new season!

Luiz on the win, the formation and playing in front of fans

It’s easy to forget just how big the pull is to join Arsenal football club.

Thanks to Raul and co for reminding me.

When Arsenal knocks, its a different knock 😉

Gazidas made it very easy to forget

Gazidis is a festering, weeping, expensive and painful scar on our club. Thank you Raul for the speedy ER patch up. COYG

Yes definitely. Luiz, Cabelos, Tierney, and Pepe all sacrificed champions league football this season to play for The Arsenal.

Well, he certainly looks deranged! Paired with the mad Greek, this could be some season!

I can see them both getting red cards in the same game.

Probably at the same time. For fighting. With each other

Disagree. It will be for a tag-team takedown on Kane.

Hopefully he will bring a lot to the table….

I sure hope he helps us climb up the LADDER of the Premier League ohHhh!

Hopefully they will kick out in time and counter the opposition’s finishing moves.

This is gonna be fun…sideshow bob will do us a job for 2 seasons. We can go back in for the leipzig kid next season.

What’s happend to his hair? That’s a jewfro, not a Sideshow Bob.

I guess the word jewfro offends you. Pathetic.

Not really. Just don’t like antisemitism. Guess you checked back here just to say that. Pathetic.

Since you make the accusation you should have the decency to explain what is antisemitic about the word jewfro.

It’s not necessarily the word itself, it’s the way it was used–picking out a physical feature often regarded as a stereotypical Jewish trait in order to make a joke. I don’t necessarily think you meant any malice in it, but I don’t agree with what you said.

But jewfros ARE funny and now David Luis has one.

Doesn’t seem much different to me than saying someone has a “Jew nose” or “Asian eyes”. You might not think it’s racist but you’d still do well to think about how your words are perceived by and affect others. Just some food for thought.

Good God! Luiz unveiling pic up on this article is quite loco. All you need to know honestly.

Comparing the craziest transfer windows of the decade:

How much do you guys rate Yossi Benayoun? Just wondering, coz I think that one season at Arsenal he really helped us in a big way.

Ummm.. No. Benayoun contributed a lot to our cause. He wasn’t bad.

C’mon you fluffy haired Brazilian clog-meister!! Although it will take me a while to get used to him in a red and white shirt rather than a blue one.

How the hell did we keep miki and let iwobi slide, I feel so sad

arseblog
Author
Reply to  Jack but

This is the year we bring in the title.

Those passing stats from the back for Sideshow Bob point to the possibility of having Xhaka take a back seat to Guendouzi and Torreira as the deeper midfielders, and with an active Ceballos providing penetration with his ball carrying down the middle. Giving Xhaka the armband should show him the omen that his time at the Emirates May be numbered.

I think we are officially at the point where we need to give Raul the benefit of the doubt. Beyond not moving players who were probably unmovable, is there anything he missed trying to address this transfer window? I am so pumped for the season to start! COYG!!!

The outgoings aren’t completed yet! We can move players internationally (just not domestically) for another couple of weeks yet. I still expect Elneny (Spanish for “The Neny”), Nacho, and maybe even a Mustafi to go!

I’d keep Nacho. Dennis forbid, we end up with some injuries at the back and our only option left is Mustafi? I dread that thought, better keep Nacho as a cover for Tierney and CB cover, just in case.

If we keep Sead, then he can get to play higher on the pitch.

If he manages to move Mustafi on for good money then I will consider this window a complete success.

Until Newcastle turn us over…

You mean the fact that he 2 years left in a contract and refused to train with the team.

Besides that I get what you mean. He is easily the best cb in the team unless chambers or holding prove otherwise. He has a lot of experience.

I would argue that Sokratis is a better defender than Luiz. But glad to have him.

To be honest, I disagree. A lot of the judgement on Luiz comes from his slightly mad first 18 months at Chelsea and the 7-1 vs Germany, but since he’s been at PSG and come back to England he has been absolutely solid

Dude, just remember what conditions Auba came to Arsenal from. Lots of ‘experts’ questioned his attitude following a turbulent time at Dortmund. Now look at him, happy as Larry and it must be infectious to the rest of the squad too, cos his permanent grin certainly makes a good number of fans wanna grin back. This is a transfer window way beyond my wildest expectations. I have to admit that I thought all the ‘£40m’ stuff bandied around at the end of last season was a smokescreen by the club to excuse themselves for a lack of activity in this… Read more »

All in all, we got more than we asked for. With even our defence additions being attack minded We should be In for tennis scores week in/out

What do you think the formation is going to be? I saw an interesting video about David luiz last 2 years at Chelsea where he was brilliant with conte 343, but not as effective in sarri 433. Basically saying he isn’t a good enough defender and needs the extra cb to get help so he doesn’t need to focus as much defensively. Has he ever played DM? Is he basically xhaka little better defensively but weaker offensively if he was a DM? If they do play 343 that Pepe, laca, auba, wouldn’t be utilized in their best position let alone… Read more »

I think Unai should use Luiz as a DM

The issue there is concentration. Luiz lacks it.

The Spoon
Reply to  Caligunner

We’re going to stun the world with our 2-3-5 formation. Out scoring everyone, first team to get 150 premier league goals. PAL to get 40 each and David Luiz grabbing a few free kicks. Ozil with his usual 2 in one decent game, probably against Norwich. The rest shared amongst the team. But probably 4-2-1-3, front 3 all swapping positions throughout the game, almost impossible to mark. And the speed! Why were being compared to Liverpool front 3, they’ve got nothing on us ?

Another band aid ala Squillaci.

Same fans would rationalise on his experience and how sensible the move was.

We are getting a player that has to adapt to our(lack of ) system in defense and who has traditionally not been that good without more structured role.

Hopefully familiarity with Unai brings the best out of him for one last hurrah but we yet again do the panic buy and band aid.

yet fans still think we have evolved since Wenger.

Good window, better than anyone thought it would be. If I was being greedy I think another attacking midfielder would have been good, especially after Iwobi left. Anything happens to Cabbelos that’s more than a few games out, we’ll be back to square one. Showed that after Ramseys injury last season. However, all in all, we’ve got 2 over spurs, fooled the media with our low budget, and bought in decent players in areas we needed to, job well done.

renwahh
Reply to  The Spoon

We do have a lot of central mid options though, Guendouzi, Torreira, Xhaka, Willock, Emile Smith Rowe, Burton even Chambers or Luiz

Vonnie
Reply to  The Spoon

I’m genuinely optimistic this season, it’ll be a truly hair raising experience. The triumvirate of transfers have done very well in this market. I think we needed two centre backs as more reliable cover given arsenal’s injury record in literally every position… Though I’m always keen to see an academy graduate step up!

(I’m new to commenting here but a big fan of arseblog, and the readership who post literally the most entertaining comments).

It actually sounds like quite a lot of players are keen to work with Emery. Wasn’t he supposed to be a big draw for Ceballos? It’s interesting for all the flack some experts on twitter give him he seems well respected by players and other coaches.