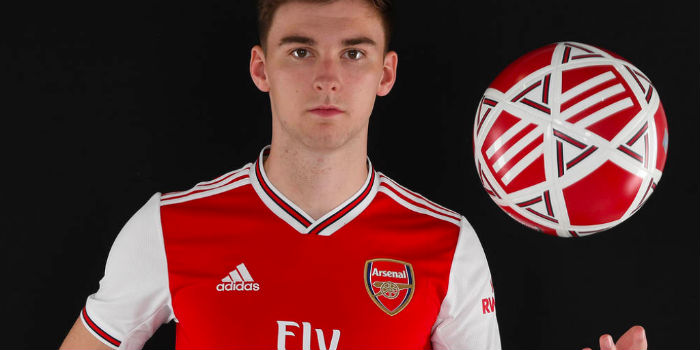 Kieran Tierney admits leaving Celtic was the hardest decision of his life but he’s now looking to taking the next step in his career with Arsenal.

After a summer of speculation, the Scotland international completed a £25 million move to the Emirates on transfer deadline day.

Having had surgery on a double hernia earlier in the summer, the 22-year-old is hoping he’ll bit fit soon to compete for the left-back slot.

In his first interview with Arsenal.com Tierney said: “It was the hardest decision in my whole life that I’ve had to make.

“I had to speak to my family and my close friends and my agent as well because it’s a hard decision to leave a club that you love so much.

“People need to know that as well. I feel Arsenal is a massive club and it’s a great opportunity for me as well. I’m delighted to be here.”

He also revealed that a desire to play in England has been a recent development.

“But when you get older… I’ve done that, I’ve made my dream, I’ve lived my dream and I’ve loved every single minute of it.

“Now I just feel was the right time to take a step on. I feel this is a great opportunity for me.”

He added: “It feels great, I’m delighted to be here [at Arsenal]. Obviously I’m injured now, but I’m just looking forward to getting back on the pitch, training and getting involved with the squad.”

This bloke is the one I’m most excited about.

Just feels like a lock for the next 10 years – good luck Kieran and welcome to The Arsenal.

Me too.. Once he gets going he’ll go through walls for us, he’s that kind of a character. Hope he brings that fan connection back that makes the stadium a fortress.. that noise, that passion

Ya gooner
Reply to  Reality check

@eeality check no pressure then lol

Looking forward to the new season and that’s a great feeling. Coyg

Looks the part in the Arsenal shirt.

For me this is the bargain of the the summer transfer window… great bit of business ???

He seems like a really good dude that takes his commitments seriously. I dont doubt for a second that he is going to give 110% to The Arsenal.

Welcome Kieran! Here’s to you becoming the best LB we’ve had since Nigel Winterburn!

I live in Edinburgh and work with a number of Celtic fans. Whilst some of them have been more resigned to losing Tierney, others downright angry, they all say how good a deal it is for us and how good a player he is. I’ve asked about the injury stuff and they don’t really think it’s anything to worry about and one of the guys said that he’s one of their most reliable/available players. I know we all want our own Andy Robertson and the two are similar but I also think that he may need a season to find… Read more »

On a side note…how good is Andy Robertson! I hope Kieran is as good as him…coz he’s by far the best full back in the league in my book.

I had to laugh when I saw a video of him doing keep ups in his new kit and remembering that that silly Scottish wotsit said that kicking a ball was causing him great pain.

Though, saying that, the same Scottish wotsit said he was a more rounded player than AWB and you have to agree with him. AWB had one breakthrough season and had an outrageous price tag. And to think we get Tierney for half of that cost.

I think we’ve manoeuvred well, but can’t see any significant improvement to the squad for this season. Koscielny – Luiz: £8mill after losing Koscielny is good business, very different players, but I don’t think we’re likely to be any better or worse off overall. Saliba: We’ve punted big on potential, hopefully it turns out to be a shrewd signing, but does nothing for us in the immediate. Tierney: Has pedigree, but also has giant red triangles all over him, 300+ days injured in 3 seasons, he’s currently injured, has no pre season behind him, and we’re unlikely to see him… Read more »

Wow – all sunshine and rainbows with you. Chill out, have a solero?

Gosh.. I’m so filled with excitement for this season..i just want to feel a bit negative before i fall sick??

Here are some things to give you that bittersweet feeling you need: 1) One of our own left to join Everton. Was at the club since he was 7 and rose through the ranks to make around 150 appearances fr the first team, that too by 23. 2) A fan who lived his dream and numerous other fans who lived their dream through him, finally left this year. Kept pushing hard and believing that he can play regular first team football for the club he is a fan of. Alas, not all dreams come true. 3) The man who put… Read more »

Very good to see the Arsenal make some solid moves to improve the side. Looking forward to new season. Here’s to everyone staying healthy!!!!

“Obviously, I’m injured now…” hmm. Would have preferred we picked him up in January and let Celtic get him fit again before pulling the trigger. However, fingers crossed he’ll get back to 100% by November as he is an excellent prospect (if he can remain fit) for us.

I think I have found out why Celtic held out for so much money through a peek at their summer business. They lost a dozen or so players to frees and/or contract terminations. Tierney was the only outgoer that actually yielded any profit. Well we’re happy to oblige.

And a good ebening to you KT.

Good signing but at expense of what we really need to do.

We have been applying band aid for many seasons now.

Some fans prefer to continue to delude themselves, rationalise things much like when Lichsteiner was added last season.

Tierney should replace Monreal. he was slow against barca.

BUT with current thinking, I won’t be surprise if we sacrifice the stronger Kolasinac instead.

Again we should have not been distracted with Saliba and paid for a Cback earlier, Leaving to end of window, sellers could smell the desperation.

One step forward with Tierney one step back with Luiz.

Yes, that’s true but there weren’t that many centre backs linked with us were there: Upamecano had a reported £92 million release clause, which is out of our financial reach, and Rugani, who we didn’t want to sign from Juve on a permanent basis. Can’t think of anyone else. It’s always better to get business done early of course, but if there isn’t a permanent signing in the offing, then a short-term fix (and I know that’s what was said about Lichtsteiner, who was a flop) is the only option unless we rely on what we have – which, clearly,… Read more »

Also, terrible statement put out by Celtic after agreeing to the deal. Basically suggesting Tierney did a Kos and forced his way out. Absolute bullshit but typical from Celtic, fkn shithouse club.