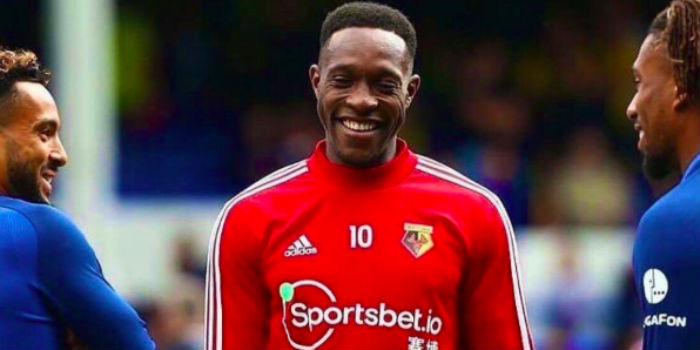 Danny Welbeck has filed a parting message to the Arsenal supporters a day after making his debut for new club Watford.

The Gunners confirmed the striker’s departure back in May when they presented him with a farewell memento following the 1-1 draw with Brighton but he chose to keep a low profile over the summer as he worked on his fitness.

Officially released at the end of July, he signed a three-year deal with the Hornets just before the new campaign began and has seemingly decided that now is the time to draw a line under his time at the Emirates.

My 5 years with The Gooners was eventful with some great highs and unfortunate lows. I’ve smiled and I’ve suffered but above all I’ve learned and I’ve grown. Arsenal has given me amazing memories, working with great staff throughout the whole club and also great teammates over the years. People that I will be lifelong friends with. Can’t forget the amazing love and support I received from the fans throughout my time with The Gunners, I appreciate it. Thanks for the love, Peace out Welbz x

Taking to Instagram, he wrote: “My 5 years with The Gooners was eventful with some great highs and unfortunate lows.

“I’ve smiled and I’ve suffered but above all I’ve learned and I’ve grown. Arsenal has given me amazing memories, working with great staff throughout the whole club and also great teammates over the years. People that I will be lifelong friends with.

“Can’t forget the amazing love and support I received from the fans throughout my time with The Gunners, I appreciate it. Thanks for the love, Peace out Welbz x”

In a separate post, he added: “What a feeling getting back on the pitch yesterday in the Premier League!

“Thank you to the Watford fans for the great reception since I’ve arrived, along with the boys and staff at the club who have been great with me ?.

“Really excited to join this family club and to see what’s ahead in this new chapter. See you at The Vic soon ?? Welbz x”

It’s great to see Welbeck fit again and we wish him the best of luck at Vicarage Road.

Good luck dude, thanks for the goal at old trafford?

And goal against Leicester City in the dying seconds

I was at the Emirates for that, atmosphere was incredible. Goosebumps just thinking back to then, was certain we’d win the title… great memory, still.

Underrated. A good player to come on whatever the scenario of the game- winning, drawing or losing.

Will always love him for that cela at old Trafford, and that stunning performance in the FA cup final vs Chelsea.

Dat guy scouting that goal vs united and that header that made me believe we were going to win the league! Good luck to a thoroughly nice bloke.

Thanks for the memories, Welbz!

Good for you. Was awesome to see Don that red n white shirt
#FACupvsManU

That last minute Goal v Leicester! All the best Welbz

Class act. The good ones seem to suffer untold injuries at Arsenal. Talk of Diaby,Eduardo, carzola, Rosicky. Injuries robbed us of their best performances but we will forever be grateful for the wonderful times.

I like to imagine that the Carzola is what Gianfranco calls himself when he’s driving.

Classy and underrated. It’s a real shame that final injury happened when he was once again coming into form

Here’s to Dat Guy kicking Troy Deeney in the cajones in training.

Welbeck and Deeney seem a very strong attacking option for the hornets.

apart from the ‘Deeney’ bit.

It was a pleasure having you with us. Thanks for your contributions and here’s to a long and injury free career from here on, Danny!

Hoping he can bloody just stay fit and start banging them in on the regs. Good luck to him.

Good luck to you, Welbz. One of the nice guys in football #datguy

Seeing Walcott, Welbeck and Iwobi in the same picture got me so emotional. I’m still trying to come to terms that they are no longer our players. This life, nothing lasts forever ?

Just one of those guys who always gave 100% and never moaned about his incredible bad luck with injuries. A model pro, good luck Danny.

What a true player welbz is , pity about the injuries but I would have loved if we had kept him as a super sub ….

Welbeck, Ramsey, Jenkinson, Iwobi – Thats how one be professional and leave the club with their dignity and respect.

Koscielny, RvP, Sanchez, Fabregas, Nasri – Are some of the worst snakes in recent times.

Well said and good luck to Welbeck. He’s only 28 and I hope he stays injury-free for this new phase in his career.

I can just imagine one of his reason’s for choosing Watford is still seeing his old teammates in London colney, Watford have their training ground right next to ours

This is the kind of legacy any hard-working player receives from the fans. Because fans know when a player tries his best every time…

Great departure. Respectful to the hand that fed and nurtured you, unlike the guy who disrespectfully ran the length of the pitch to celebrate in against his old team, and for hateful rivals.

Thank you Danny Welbeck for being such a gentleman. You are one of the reason why I supported Arsenal and now that you are at Watford, I will be keenly supporting Watford. God bless you and the Watford team that saw all the greatness in you in spite of your injuries and gave this opportunity to do what you love: playing football in the Premier league.

Never let us down, and was hugely unfortunate with injuries. I really hope he has a stellar career at Watford (apart from against us). Thanks Welbz and the best of luck.