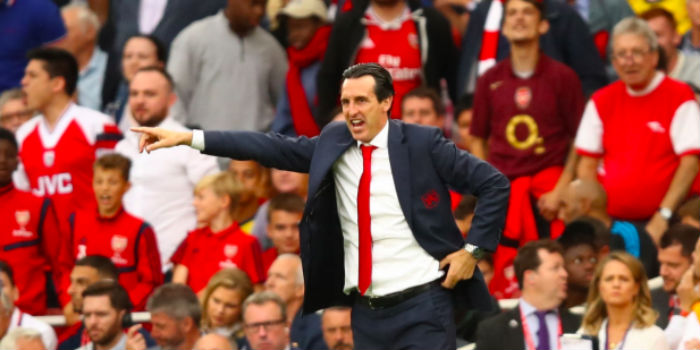 Unai Emery says he’s proud of Arsenal’s performance even though his side had to settle for a point at the end of a thrilling North London derby.

The Gunners started the afternoon slowly falling two goals behind when Christian Eriksen tapped into an empty net on 10 minutes and Harry Kane converted a penalty after Granit Xhaka senseleslly hacked down Son Heung-min. But they showed determination to deny Sp*rs a first Premier League win at the Emirates since 2010.

Alex Lacazette lashed home just before the break to reduce the deficit and Pierre-Emerick Aubameyang levelled things up with 19 minutes remaining to set up a grandstand finish. Both sides might have won it – Harry Kane hit the post and Sokratis had a goal ruled out for offside – before the points were shared.

In his post-game press conference, Emery said: “Obviously after [being 2-0 down] we can be very proud of our response and also the atmosphere we created, and how our supporters pushed us to get back in the game after we scored, to get the second goal and then to have chances to score a third goal. Above all, the result, we deserved more.

“Also, we controlled the second half better than the first half. Tactically, the first goal is one mistake because we played that action more with our hearts than our heads. We had two players trying to win the ball from Harry Kane and we needed to go with one, and the other with the cover.

In the second half we did that work perfectly but you concede one of these actions and they have very good players to score. The second goal is the same, one mistake. It’s frustration after the first goal. After the first 20, 25 minutes it was very good at the beginning. That second goal gave us difficult moments but the players worked very well to recover the result for us and our fans.

“We created a very good atmosphere. The game was amazing for the football but for us, it’s not enough. I am very proud of our work, our players and our supporters. We need to continue working to develop the balance defensively in that moment. Today we played going against them and finding our option in the attacking third to score and win the match.”

As is often the case with Arsenal, early individual errors made for an uphill struggle. In the build-up to Christian Eriksen’s opener, David Luiz committed himself to a challenge on Son that the Korean escaped with ease and Bernd Leno couldn’t push the ball out of danger leaving the Dane with the easiest of finishes. Later Granit Xhaka went to ground in the box, felling Son with a late challenge that was always going to result in a penalty. Kane tucked it away.

Explaining the lapses, Emery said: “We played a lot with our heart. In the first half, the first goal is conceded because we were working with two players on Harry Kane. He can flick it on. It’s the same with one player or two. We need to have the cover.

“The second goal is maybe the frustration from the first goal. The penalty… We need to also be clever in our box. There are more positives than negatives in 90 minutes. I am going to be optimistic and also I am very proud of the work, of our players. We will take those mistakes and improve.”

Xhaka channeling his inner Mustafi….get rid of both

maybe he should lament his team selection

Don’t think emery can really legislate for Xhaka two footing someone in the box. Doubt it was instruction.

Normally I’d agree but Xhaka really has a history of this now. He’s meant to be a DM but he doesn’t understand the position at all. He can get away with it when opponents sit off, but when he actually has to defend, when he’s under defensive pressure, he simply can’t read the game. People used to say Walcott didn’t have a football brain, which I always thought was unfair. But Xhaka really doesn’t have a football brain, or at least he really doesn’t understand his position and his responsibilities and in big games he becomes a massive liability. He… Read more »

Well, it’s not like Xhaka hasn’t done that sort of thing a few times, is it?

You can always just not play the calamitous lump. Xhaka has no business being at the base of any midfield. If you think Torreira’s too lightweight (I don’t but it seems Emery does) stick Guendouzi there.

Chambers deserves a chance to play, neither of of Sokratis and Luiz have put in better performances than he did at Newcastle

Mhkitaryan shouldn’t be coming on the pitch ahead of Nelson.

Ceballos is our midfield creative spark now that Ozil is essentially a ghost. He has to be accommodated in the XI.

I’m waiting to see Ozil play with the front three that we have. It’ll be a murder.

Yup then you take a look at the stats. Xhaka is top of the Giving Away Penalties list…

I just hope Emery can be “protagonist” not conservative bcs we have too many good players in midfield and attack and it will be such a shame not to use our most powerful assets….

It All starts from defense.

Can’t blame the manager for those goals. Maddening errors and we’ve seen it all before. We know who the weak links are in this side. Did enjoy the comeback but shame we couldn’t get the winner.

he is totally to blame. squad selection is his and he still hasnt learned that this is expected from xhaka. not a lapse.

If he says to Xhaka, don’t do that again. Xhaka says I wont, and doesn’t do it again for 10 games before he does it again. That’s Xhaka’s fault.

Regardless of anything else Emery has to trust 11 players at some point.

Not sure ‘individuals’ will “take those mistakes and improve” if they continue to get rewarded with another start next match. Honestly, loyalty to your players only stretches so far. There comes a point where it should be superseded with what is best for the team. There’s a team in this squad that can comfortably come 3rd this season. Loyalty to the supporters first by putting out a side which carries the best chance of accomplishing that.

We may as well support and get behind Xhaka, we no longer have a manager with eternal patience, it’ll take Emery a little longer to purge our squad. But it does appear he’s on the right path, he worked Ozil out within weeks, he’s completely lost it with Mustafi. He won’t want to upset the harmony in the squad, but providing the scouting is good? I think Emery is our man. Xhaka has the captaincy as our most senior player, but not taken the club captaincy, and once Torreira is up to speed, and Ceballos settles, my bet is we’ll… Read more »

I don’t have a coach..it saddens and bothers me alot

Its not surprising. We never properly addressed our deficiencies at the back this summer. I was a bit torn between whether we needed to go back 3 or back 4 for this game. In the end I think Emery made the right decision with back 4 and a high energy midfield to dominate but we naturally carried risk. And that risk was not well managed. 1) First goal Sokratis did Mustafi proud over committing unnecessarily when Granit signaled to him to stay back. Then Luiz was turned (again) far too easily. Even so, Leno I felt should have had a… Read more »

Sorry, but Xhaka was a mess. Yes he makes some good passes, yes he has a killer long shot, but he is slow (especially on the turn) and has to commit so many fouls in midfield when he gets beat and exposes out defense. 7 fouls today, most in any EPL game this season. Not only that but he does stupid, stupid fouls like the penalty. That was moronic! The fight-back is on Guendouzi and out attack, Xhaka made some nice passes in that but again his defense during lat 2nd half killed momentum. Now consider Ceballos has Xhaka’s passing… Read more »

As for your rubbish about Sokratis and Kane, mate sorry, but that was a disgrace and a dive. Atkinson was not being generous, all he did was make the right call and then be a spineless prick by not carding the cheat. He lept to the side and threw his legs into Papa, how more of a dive could you make?

Yup and the media isn’t talking about him and dele ali diving.

Auba is better when he plays central, where he can score more goals, not on the left. Lacazette and him should swap position more during games.

When Xhaka first came to England even 50/50 sliding tackles were punished harshly. Even some undeserved red cards. He had a reputation and the referees made sure he would know it. We stopped allowing him so far upfield that he would be coaxed into tackles from behind. Now opposition teams know what the referees see in Xhaka. And that confirmation bias is coming back to haunt Xhaka. To the extent that opposition teams will try and isolate Xhaka in one on one situations. He therefore now has a very narrow range of use in a squad and others need to… Read more »

Sounds so… Wengerish. In his excuses. We are already there.

Emery must make geonduzi ,torerra and ozil or willock cabellos on central midfielder

The top 3 he must create a connection between the 3 and the midfield and them.

At the back we need holding in central. When he was playing last season he played a good part in our running of undefeated games.

Another thing they must not be so obvious at times.