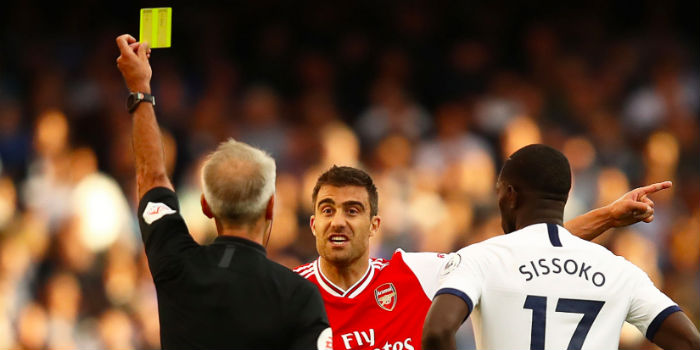 Sokratis admits Arsenal are frustrated that they couldn’t find a winning goal against Sp*rs but admits that bouncing back from two goals behind to grab a 2-2 draw was important.

Christian Eriksen’s strike on 10 minutes and Harry Kane’s penalty five minutes before half time put the visitors in a commanding position but they were pegged back by Alex Lacazette’s goal just before the break and Pierre-Emerick Aubameyang’s poacher’s finish with 19 minutes remaining.

Sokratis thought he’d bagged a winner when he bundled home a cross late on but the referee, backed by VAR, ruled it out for offside.

“It was a very difficult game but in the second half we played very good and I think we had a big chance to win this game,” the Greek told Arsenal.com.

“It [Alex Lacazette’s goal] was very important, I think in the first half we played good, we like to attack, we like to shoot.”

The Gunners mustered 26 attempts on goal, double the number of Sp*rs, although our neighbours managed more on target, nine, compared to our eight.

“We would have like to have won this game,” added the Greek, “Tottenham are a very good team, they play well on the counter attack but in the second half I think we played much better.

“At the end of the game if you see the second half we are not happy because we had many more chances to win the game, but in the end it is better if we don’t lose. We would have liked to win this game but it is also important to get a point.

“I think we’ve started the season good, last year the first games we did not win, so this year we are playing much better in our first games but we still have to improve. We have to work and there’s a long way to go.”

Fact is if you give away 2 goals it makes it harder to win but some of the players don’t seem to understand that.

Thank the lord for Auba and Laca not understanding how hard it is.

And what is it with his grammar. You don’t play good, you play well. Jeez, what is the club coming to!

Lots of tough games to get us going. Burnley at home the only banker. Plus the majority of our first choice defence out. Not the worst start.

Just concerned about that first half performance. It was our worst all season in our most important game. Hoping we grow into the season. And quick.

Not popular to criticise Sokratis I see. Who is our first choice defense? Sokratis and Luiz have not been anymore water tight than with Mustafi just like last season following Palace when the vaunted pairing of Koscielny-Sokratis leaked plenty of goals thereafter anyway. Nothing has been fixed. We should be adding the best Cback we can get this last summer. Instead we tried to retain and over the hill Koscielny, add an expensive teenager who cannot feature for this season and buy Tierny (a good buy) but neglect adding a strong Cback instead Squillaci it with a band aid buy… Read more »

Look, we all know Sokratis and Luiz are sticking plasters. Sokratis will probably leave at the end of this season, Luiz the next. They aren’t the future.

However players like Xhaka, Kolasinac, Mustafi are all in their mid twenties and have been at the club long enough to know what to do and what not to do.

It’s got nothing to do with popularity, I don’t want to criticise any of our players. But when I look at Xhaka and I think he could be at arsenal for 8 more years, I get scared. And depressed.

Well, we were looking quite solid centrally with Holding and Sokratis last year. Then Holding blew a ligament and it all went Mustafi on us.

I reckon that when Rob’s fit we should carry on with the known, working pair.

“We had a big chance to win” it would have been even bigger, if we hadn’t gifted them both goals!!
So bloody annoyed right now… i wanted all 3 points, but bugger me, Xhaka had other ideas….
We always make it hard for ourselves & have a mountain to climb….and against them of all people….. sigh……

Mix bag from the Greek. Like the aggression in the derby but it is always a liability with him as he skirts the line too often. First goal he over committed and unnecessarily when Granit had the player covered. It meant an opening behind. Luiz again tuned too easily then Leno should have had more of a grip on a tame shot but Sokratis then again ball watching and leaving erickson with an easy tap in. BUT also some very iffy moments late on when he bundled Kane over in the box as last man. But for (unusual) generosity of… Read more »

Xhaka is 4th in most errors leading to a goal in the PL era.

Skrtel (CB : 8 seasons in the league)

Cahill (CB : Entering his 13th season in the league)

Xhaka ( DLM : Entering his 4th season in the league)

According to the EPL Xhaka has 7 of these errors. This makes him nr. 1 in the all time midfield statistic, which is frankly embarrassing.

But if you add defenders, it is misleading to say he is fourth. Cahill Lesscott and Skrtel are all on 8 mistakes- but no less than 6 players are on 7 mistakes as Xhaka is, including people like Vertonghen and Johs Stones.

Also: Error Leading to goals is not a statistic avalilable prior to 2006/07, so we don’t have statistical knowledge of the players before that.
https://www.premierleague.com/stats/clarification

Great stat, well…great in itself, fuking awful for us!

“It [Alex Lacazette’s goal] was very important, I think in the first half we played good, we like to attack, we like to shoot.”

Not getting caught upfield like a dumbass is also very important!

Did I imagine Papa putting Winks and Rose in a headlock before he got yellow-carded or did it happen for real?

He’s solid and has his moments, but ideally he’d be about third choice.

His role in their first goal was simply horrible defending.