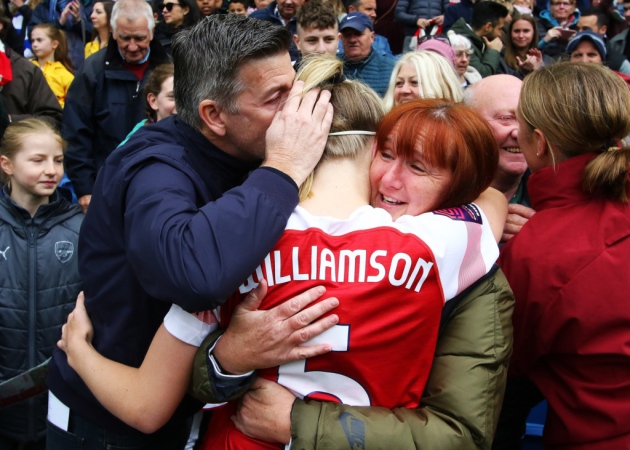 Arsenal Women grabbed a last gasp 1-0 win away at Manchester United on Monday night thanks to a 90th minute strike from Danielle van de Donk. Tim Stillman was there and caught up with Gunners centre half Leah Williamson exclusively for Arseblog News.

On grinding out a victory against a determined United side…

It feels good, yes. Last season we tended to score early and make it easier for ourselves, the Birmingham game in March went against that trend which is why it was so stressful for everyone involved, especially given what was at stake at that stage of the season, so this game was similar. To have this early in the season for us is good for us.

But we kept the pressure on, we were the team on top and so we deserved this, we didn’t nick it. But you don’t know if the goal is coming or not, so when it did I was going as mad as I did at Birmingham!

Yeah, you could say tonight was uncomfortable. United are a good team, they’ve got good individuals and the thing for us with a team like that is that you can’t just commit everyone forward because they have attackers that can punish you, which added to the pressure for us. But I thought we played the circumstances very well, we kept the ball and kept playing.

The message from Joe at half time was that the points were there to take and maybe we were a bit passive in the first half. He told us to go at them more, but also to be selfless, this is a game where you need to be selfless in and I think that’s what we did in the second half, that was the difference.

The midfielder delivers when @ArsenalWFC need her, once again! pic.twitter.com/HsGLiTHhtR

On why Arsenal were passive in the first half…

I can take some responsibility for that, it’s down to me to set up attacks from my position, I thought it was just better to get into the rhythm of the game and not force it. We’ve played three very, very different games this week, so I wanted us to find our feet. I think we realised once we started to play through that there were gaps there we could exploit.

On the WSL being tougher than ever this season…

It has and I love it. That’s what we want, we want good games with the crowd on top of the game and I’m very much on board with that. I really enjoy that as a competitor and every single week we have a job to do because there are no easy tick offs in the division anymore and that just makes the league all the better. We talk about growing the league, that’s what we need to see every week.

I said in an interview I did recently that the WSL needs derby games, those are the fixtures everyone looks forward to, in the men’s game those are the fixtures that get everyone talking and that’s what we need in the women’s game. For us it feels great, coming to Manchester for our third game in a week after playing in the Champions League on a Monday night, this is what we want. All of the players felt this was a big game and that is exactly what we want to be involved in.

Arsenal Women are brilliant end of! 🙂

I felt it last season & it grows this season. This group has the spirit of the Invincibles.

Yes, while its good watching our team demolish lesser sides 5, 6 or 7 -nil it is these grind out 3 points games that win you the league!

Absolutely brilliant from the women. They got both the skills and the fight required to get a result like this away. 3rd game in a week too!

No better feeling!
Always good to put the mancs in their place. Top work.

Fewer heart attack moments than the West Ham game which was good but was beginning to wonder if we could ever beat Mary Earps; then along comes DvD!

Can Leah play for the men’s team?

Can someone please pass this bit of sage advice on to the men’s team please?

It is quite fascinating how Joe is using Leah this season. Centerback-playmaker in the team with best collection of attacking mids available in the league. This isn’t just playing out from the back, it is like playing your no 10 in centerback position :). And she is absolutely excellent at it. She was so good last year, but early signs are, that she’s made another step up. It will be interesting to see how that changes when Lia is back. And if it changes. Where is so much creativity in this team, that when it finally clicks, we should be… Read more »

A small question blogs.. do these games come on TV? Or can they be watched online somewhere? I want to catch a game or two but have no clue where to watch them.

If you read Tim’s preview to each game he tells you exactly where to watch the matches. Last night was on BT Sport and very good it was too.
The FA Player App will have all WSL games on but not always live depending upon other screenings already booked and good old BBC have a highlights show each week.

It was a nice game last night. I can now watch the gamea on the fa app. COYG