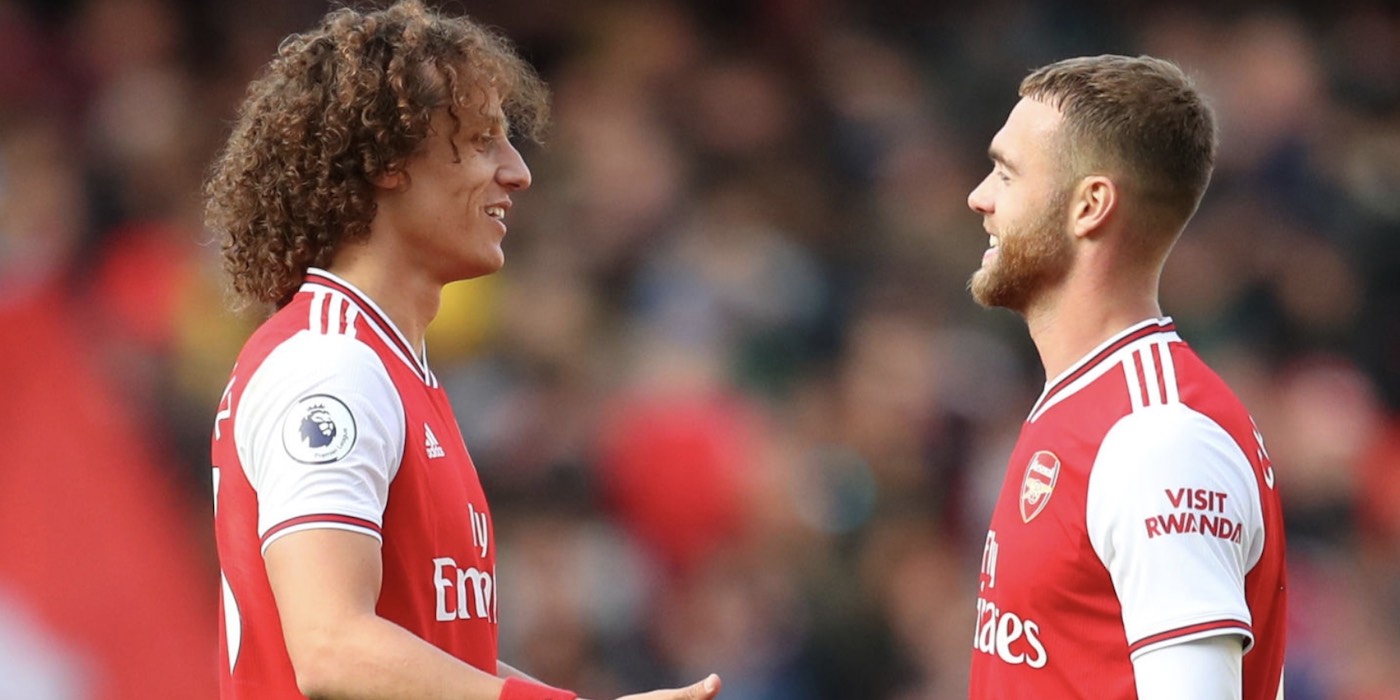 Following yesterday’s story about what a nice guy David Luiz is, Calum Chambers has sung the praises of his new teammate after his first goal for Arsenal turned out to be the winner against Bournemouth.

On a day when Arsenal chances were at a premium, the Brazilian’s header from Nicolas Pepe’s corner was enough to give the Gunners a 1-0 win, three points and third place in the Premier League, and afterwards Chambers was keen to talk up the qualities that the former PSG man has brought to the squad.

The reaction to the goal illustrated Luiz’s popularity, and the stand-in right back made it clear he’s held in high esteem.

“David has been brilliant,” he said. “He has come in and no-one in the club has a bad word to say about him.

“He is one of the nicest guys I have met, he talks to you, gives you advice and makes everyone feel like he is giving you his undivided attention.

“Off the pitch, he is a great guy and on the pitch he brings his qualities and is playing well at the moment.

“He brings some added experience, obviously he was won things and I haven’t won as many things as he has so there are things I can learn from him both on and off the pitch, it is always good to have experience like that in the team.”

Luiz also came in for some praise from Unai Emery following the game, with the Spaniard saying, “He’s very positive. Every time he’s speaking about positive things and helping young players.

“He came late into the squad but really, his commitment is very high with us, and his behaviour is too.

“Everybody is happy with that.”

If he could cut giving away penalty’s I’d be happy too.

I kinda feel a bit sorry for Luiz. I dont think he anticipated how much defending he was going to have to do at Arsenal. And that’s been our biggest problem at Arsenal. We are probably the only team in the league that leaves the defending solely down to the defenders. We’ve seen enough centre halves and fullbacks down the years, of all different abilities, but nothing has changed. And that’s because the culture and team ethos at Arsenal is wrong. You play football as a team. That means you attack as a team, and you defend as a team… Read more »

Let’s hope he performs as well on the pitch as off it. Having new team-mates is hard but Luiz is obviously adapting off the pitch.

Our defence was better on the pitch versus Bournmouth than recently, would be happy with a few more 1-nils to the Arsenal.

You are a nice guy….ever thought about that? You worked hard in your loan spell at fulham and gave the best in the last 2 games…no chambers you are the nice one here.

I get the negativity with Mustafi and Xhaka but not with Luiz. All footballers make the odd mistake but he’s generally been good since he signed. Lovely bloke by all accounts too.

Been good minus 2 very stupid penalties.

Liverpool game aside he’s been excellent. But then that goes down to arsenal playing diamond vs the team with the best bull back sin the world

And zero chances were created from said full backs because we anticipated it and came prepared to defend crosses.
We conceded from a corner and a penalty and a third goal where we played more openly, lost the ball in transition, Luiz over committed and couldn’t contain his man …..
While missing an empty net, a 1on1 and other chances from the edge of the box.

The game plan work but we missed and they scored the corner goal.

Yeah, if only the game had come a bit later in the season when Pepe found his boots and Lacazette was fully fit.

Pepe missed a couple of excellent chances before we conceded and it would have been a different game had we scored first or taken our chances.

The game plan most definitely didn’t work. We were pinned back with our defence under pressure for the entirety of the game. And then you complain when defenders make errors. Of course you are going to make errors if you are in stress situations for the whole game.

Watch the recent Lee Dixon video where he defends the current Arsenal backline, and specifically blames one of the Luiz penalities on 5 players being caught up in the opposition box. He says the penalty against Luiz was due to the resulting panick it brought on. Lee Dixon knows how to define a stupid penalty. Arsenal fans dont know how to define defending, and haven’t for a long time.

A brilliant addition (if you’re a young competent centre back looking for an opportunity to break into the team).

Come on guys, spin this into a criticism of the manager.

Alright, seeing the ‘penalties given away’ comments, let me have a try:

Luiz gave away 2 penalties in his first 4 PL games for us. He gave away 3 penalties in 160 games for Chelsea. The way our manager sets up our midfield invites pressure and enables opposition to run directly at our defenders, which is very different from what Luiz was used to at Chelsea.

It’s incompetence and decision making errors of our defenders . There is no manager in the world who can prevent his back line from getting attacked. Many set up their teams defensively and defenders are expected to make the right decisions. No excuse. And before using simplistic generalizations, how about analyzing each penalty in isolation: – Xhaka goes down too late on Son, 2 legs, incredibly stupid and has nothing to do with coaching. It’s a basic knowledge for sunday league level players to stay on your feet inside your box. -David luiz get turn on by a pacy Salah,… Read more »

are you new to watching football or something?
This is called an upset, a once in a life time occurrence, and is unlikely to happen again any time soon.
It is not a consistent trend for teams to go to the Etihad and come out victorious. Thats why they are a team the tallies 98-100 points per season.

“There is no manager in the world who can prevent his back line from getting attacked.”
That is bullshit my friend

God is a Gooner
Reply to  Red-Sky

Seriously? A ‘Once in a lifetime occurrence’
In the last 12 months Wolves have beaten all of the top 6 in the league bar Liverpool who they knocked out of the cup.

Red-Sky
Reply to  God is a Gooner

How many wins vs city in their home?

Watch this and re-evaluate your thoughts on this subject. Its legend Lee Dixon talking about Arsenal’s defending this season, and where the problems start. These are clearly organizational issues that need to be sorted out by the manager:
https://www.youtube.com/watch?v=ZvQ1UxzyM5M

Holy shit yen, I think Red-Sky was looking for parody, not truth! 😉

This team has too many nice guys. Sick of it.
#emeryout

Why not Chambers at DM, if physicality is such an important criterion?

Less of the costly mistakes and the love affair between him and us fans could be total.

Impossible not to love Don Rickles.

Nketibag
Reply to  The Mighty Bun

This time last season we were 4th with 18 points. Now we are 3rd with 15, which would have only been good enough for 8th in 18/19. It’s pretty clear to me we are not improving and in the top 4 largely due to other’s even worse off.

So many experts and analysts here. The way they can pick out every tackle or shirt pull is amazing. Strange that i watched 3 games yesterday and the amount of shirt and shorts tugging was incredible and nearly all went unpunished but Luiz did it (awful man) and he is the villain? When your midfield offer no cover for the defence, it’s pretty obvious that the defenders are going to get caught out of position from time to time and some of those times will lead to goals. That’s happened to us, Utd, City, S***s, if fact a lot of… Read more »

The thing about Luiz other than his mistakes, he is one defender in our squad who doesn’t suffer from double mind syndrome. When there is danger lurking he only has one thing in mind get it cleared and not try and be cute. That is the positive part of his game and yes time wasting tactics. Remember Koscielny for all things I loved about his game, he too was error prone like the most noticeable one was his choice of a making a difficult pass at Camp Nou (the game in which elneny scored) which was intervened by Barcelona players… Read more »

Well in the Simpsons sideshow Bob always played nice while devicing his diabolical schemes. Don’t be fooled Chambers don’t be the next Bart Simpson

Perhaps Luiz should replace Xhaka’s role in the team at the base of the midfield. His distribution is just as good, just as physical, similarly slow, sanded leadership skills, but has the benefit of knowing how to defend…

You do have a point….

Not ‘on subject’ I know, but does anyone know why Saliba has only played once for St Etienne this season?

Gonna fit right in at Arsenal then…