Arseblog News – the Arsenal news site
Home Columnists Column: Guendouzi might be golden, but don’t shower him too soon 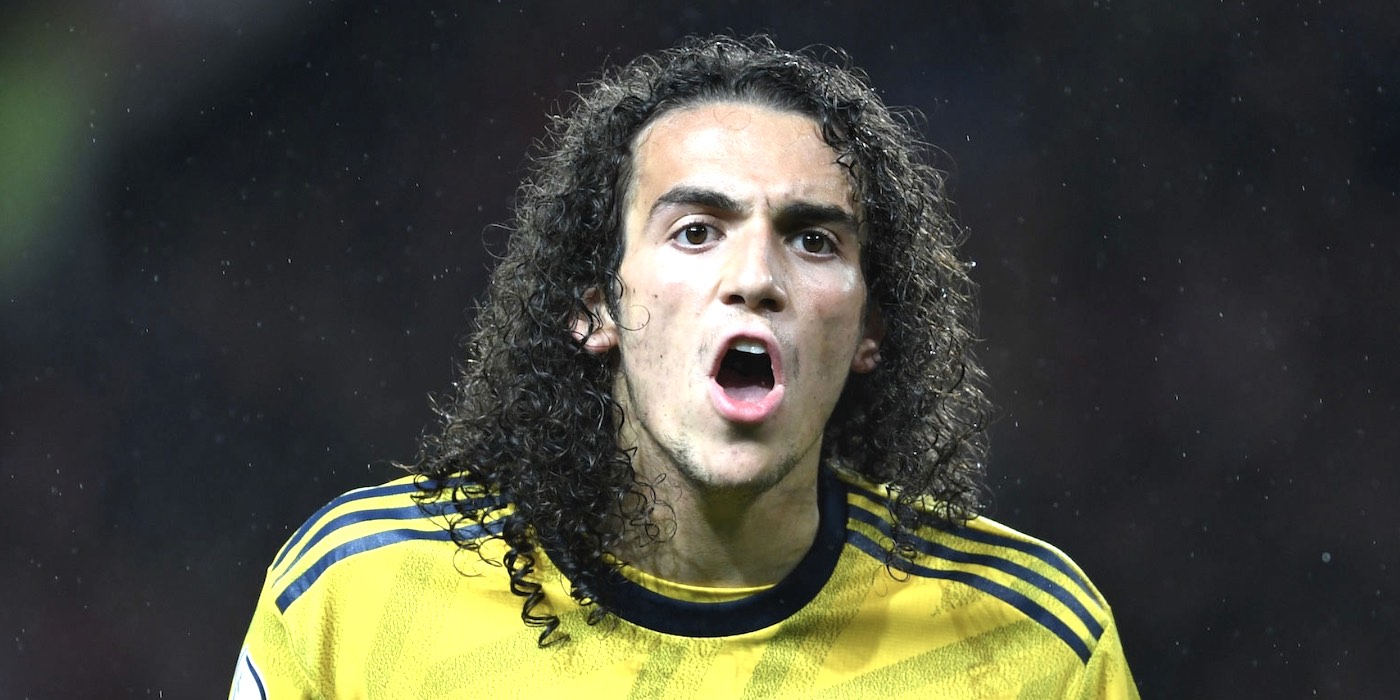 Graham Dougan was a youth prospect at Arsenal in the 1970s but never quite made the grade, making his career in the upper echelons of the old division two

. He was also a Scottish U25 international. He is a regular pundit on TV in Malta and Luxembourg, and an after-dinner speaker of some repute.

He writes exclusively for the site and we sure you continue to enjoy his keen and unique insight into the game. This week he looks Matteo Guendouzi’s nomination for Golden Boy.

Like many of you, I have been very impressed with young midfielder Matteo Guendouzi this season. The Frenchman, with his hair like a buxom wrench in a medieval tavern, really catches the eye with his energetic performances, his desire, and his willingness to thrust his backside into opposition groins in order to win his side a free kick.

When you consider that former recruitment guru Sven Mislethwaite had to travel all the way to the Orient to discover him, it makes his progress even more remarkable. In my day, the furthest a scout was willing to go was the end of the Jubilee Line, so it shows you how much football has changed.

I remember when I was discovered, the man in question was an Irish chap named Flaherty or O’Doherty – it’s all the same really – and he was so impressed with my performance in the game he saw he signed me up on the spot. Later, it turned out he’d mistaken me for Mick Channon, who went on to have a starling career for Southampton and England, and it emerged later that he’d spent all afternoon in the Wolf and Goblet which went some way to explain it.

As my grandmother used to say, sometimes you need the hand-shady of good fortune in your career, and that was certainly mine, even if things never quite worked out for me at Arsenal. I could never convince Bertie Mee of my quality, but in my defence I don’t think it helped that Pat Rice took against me from the start and he briefed the manager against me. ‘He’s shoyte’, he’d say in that Eire accent of his, and Mee trusted his senior players and wouldn’t given the benilyn of the doubt to a youngster like me, no matter how hard I tried.

This column isn’t about me airing old grievances though, it’s about Guendouzi, and in lots of ways he reminds me of another young Arsenal midfielder from my time at the club. He’s one many people won’t have heard of, a local lad named Jimmy Post. He was a tall, imposing player who was nicknamed ‘Lamp’ for reasons which still escape me. The potential he had was frightening.

In training one day he and an up and coming Liam Brady played in a practice match at Highbury, the reserves against the first team, and the two of them made mints meat of their more experience colleagues. The wonderful left foot of Brady and the physical, striding elegance of Post left onlookers amazed, gobsmacked and rooted to the spot. I was one them. I was also playing centre half that day for the reserves, so I don’t suppose that impressed anyone much.

Afterwards, all anyone could talk about was how far Jimmy was going to go. The Arsenal first team for sure. England, no doubt about – it was just about how many cats he’d win. The future seemed certain, and it was tremendously exciting. Not for Alan Ball, who moaned whenever a young player looked like he might take his place, but for the club itself.

Unfortunately, Lamp got wind of this praise. Mostly because he was right there listening and people were telling him directly to his face how good he was. I can’t say for sure, but I know for certain that he got carried away with it all. He started to believe all the hype and with it his performances suffered. We all know that Liam Brady made the breakthrough, but Jimmy never did. To me it shows the danger of a young player believing in himself too much when he should have been broken down to a shell of a man then rebuilt to believe in himself just the right amount. That’s how it was done back in those days. The complete psychological destruction of an emerging young footballer is now sadly a lost art.

That’s why players these days don’t have the character to succeed at the top level. They might make it to the first team, play lots of games, win things and achieve success, but without cleaning the boobs of other professionals or running up and down the trellises like we had to, they lack something fundamentally important to any footballer. What that is, I can’t say, but I know it’s true.

So as Arsenal fans get on board the Guendouzi hype train, they’d do well to remember some of the other young talents who looked good but were unable to produce consistently. Dennis Nielsen, the exciting young Brazilian fell by the wayside; Frank Merida; Franis Coquenbull; Alexis Sanchez Watt; Danny Karbootsale; Chris Kamara; and James Emancipation-Thomas; the list does have an end but is also endless – and isn’t that just the great Panadol of football?

Yes, we should be excited, and his nomination to be Europe’s Golden Boy is a acknowledgement of what he’s done so far, but I would hesitate before giving him the Golden Shower that so many seem keen on.

Until next time, your pal GD.

The best part of the Dougan pieces are the responses from people blind to parody.

I’m not sure he was blind to it. Read the entire thing again. Then read the title and then his comment. Rinse and repeat till you understand

No, he actually advised against the golden shower.

People who dislike this comment don’t know what a ‘golden shower is. Google and have fun

Could not stop laughing throughout. Brilliant as ever!

Moley mole the mole who lives in a hole.

One thing to add, I don’t think Guendouzi would want a shower anyway, golden or indeed of any colour. He’s French, and famously the French never wash.

Anyway, that’s an aside. Everything in this column is 100% spot on.

le caiman
Reply to  Moley mole the mole who lives in a hole.

nice comment you racist morron. iam french and i wish a good life

You do know know there is no such thing as the French race….idiot!

This headline had me laughing out loud at work.
5 people are now staring at me, how do I explain this?

Explain the joke to them. No one likes to be left out of a golden shower.

You do write up some great stuff but this here is the best I’ve read since the first one you wrote.

See, build your spirit and break it up. But seriously it made me forget the interlull

Dougan is the new diamond eye, get this bloke a contract straight away. His knollage is second to noone.

Can’t pick the best bit, between “hair like a buxom wench in a medieval tavern” and “hand-shandy of good fortune”

his desire, and his willingness to thrust his backside into opposition groins in order to win his side a free kick ???????

Waw… this is a fun read.. hope the Athletic team is browsing!..

” I can’t say for sure, but I know for certain” I love this fella. We should definitely get him on the coaching staff!

Hahahaha ! This shit cracked me up big time! ?

You should obviously write for the Athletic.

I burst out laughing when I read that, then did it again every time I tried to read further.

This is awfully written , the examples he gave had nowhere near the kind of sample size guendozi has had , he had played a whole season in the arsenal first team , the names he mentioned did not come close to that. Guendozi has been exceptional considering he’s age and where he has come from it seems like arseblog wants to always harp on the negative aspects of his game , if this had been Ramsey or willock performing like this I doubt there would be any mentions of ‘let’s wait and see he may turn out to be… Read more »

One Armed Boxer
Reply to  Boywonder

The Kolkata Gooner
Reply to  Boywonder

A very amusing read with enhanced hilarity because of auto-correct (perhaps?). I’m sure dear old Pat Rice would twitch a bit at mention of his “Eire” accent! Wasn’t he born in N5 of Ulster stock?

Always thought Patrice was French and went by one name like that Urugyuan Peele cap.

I remember the young Dennis Nielsen. Very quiet but deadly. Whatever happened to him I wonder?

I feel kind of responsible for Jimmy’s failures. You see, I was at that practice match. My Dad brought me (even though it was a school day) and I sat on the terraces at the old University grounds and was capitivated by Jimmy Post. He was Patrick Veira when Veira was just a gleam in his father’s eye. I even sang a chant for ol’ Jimmy. It went… Jimmy Post Post Post… Is the most most most He”ll turn you to toast toast toast And start to boast boast boast Yeah I know it’s shite but hey, I was only… Read more »

Am I correct in saying Mr Dougan ended up as a builder in Torquay?

What i really dislike about our fanbase is still seeing posts/comments/digs etc, about how he, apparently, only passes back to our CBs!? I’ve seen him live, and on TV, many times and he is always looking to progress the game in the best way. His forward passing is already phenomenal. His reading of our attack (when we have one…) Is awesome! We have a gem on our hands, here!

Stellar work sir. Not laughed this hard in ages.