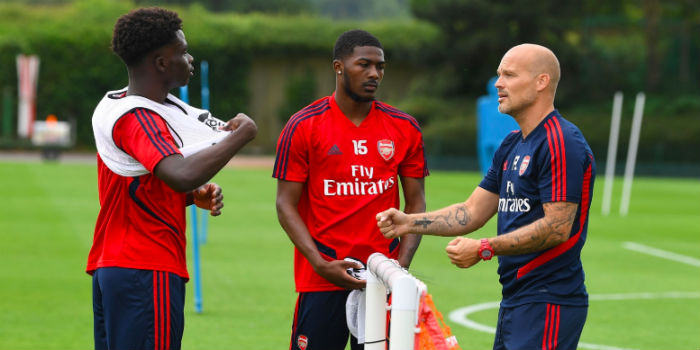 Ainsley Maitland-Niles says Freddie Ljungberg has been helping him improve the attacking side of his game by sharing a few hints and tips on the training ground.

The Swede joined Unai Emery’s first team coaching roster in the summer and has been hailed by a number of the club’s young English players, including Joe Willock and Bukayo Saka, for the way he’s taken time out to relay one-on-one advice.

While Ljungberg started his career in the centre of midfield before being converted to a winger by Arsene Wenger, Maitland-Niles still harbours hopes of playing in the middle even though most of his first team minutes have so far come at full-back.

Given the Swede’s experience on the flanks, Maitland-Niles is happy to be mentored.

“There’s quite a few things [I have learnt] really,” he told Arsenal.com.

“He knows me as a winger, so attacking-wise he’s helped my game a lot. Defensively, I go to someone else to help me because they’re two different styles that I have to play.

“Him personally, he’s pulled me to the side a lot and has shown me different techniques and ways of beating players, ways of crossing the ball and shooting. It’s helping me and I’m happy to have him around because he’s such a big figure in the team.”

According to Maitland-Niles, Ljungberg’s influence is paying dividends.

“I only got two assists last season and I’ve got two already this season, which is a good start,” he said.

“Hopefully I continue with my assists and maybe create more opportunities to get my stats higher this season.

“I worked on it a lot when I was younger because I used to play on the wing, so the timing of my runs is everything to me.

Versatile player. I’m not sure he has a “best-position”. People like to claim he is a DM, but really he has almost zero minutes to show for that, he is a solid RB (though he’s probably 3rd choice now) and a pretty good winger (again needs to show more there too). Still yet to take the next step and get consistent at the top level, but a handy, versatile player to have in our squad, especially if we get hit by the i-j-r- bug at some stage.

I hope he doesn’t end up like Ox – frustrated at being shuffled around. Part of the problem with Ox was that he couldn’t accept his versatility as his strength. I completely understand every footballer wanting a position to call their own, but in AMN’s case his strength IS his versatility, and if he can accept that he’ll be a squad player for us for the next 10 years. He can be on the bench every game as cover for 2 or 3 positions and start in cup games. He’s a swiss army knife and there’s nothing wrong with that!

A few could do with taking a leaf out of James Milner’s book.
I still kinda wish we signed him when Liverpool did.

I was going to mention Milner. Nacho at Real Madrid came to mind as well. Or Sergi Roberto at FCB. All players who aren’t quite at the level, but embrace their value as multi-tool players.

Seriously not sure why anyone would vote this down. Milner’s career is exceptional; he has vastly outperformed his talent level. Fills multiple positions, does what’s asked of him, and work’s his arse off. As a reward he plays major minutes in arguably the best team in the world right now. He played half-an-hour in the champion’s league final and 31 games in the league last year. Played 26 and 31 for $ity when they won in ’12 and ’14 (averaged over 30 games a season playing with star-studded $ity and Puddles’ teams. If AMN can come even close to achieving… Read more »

They are ignorant that’s why…or rather uneducated…I dunno I’m trying to find excuses for them and failing. Your points on Milner are spot on and I heard a Man Utd fan saying the very same thing about Milner only yesterday. Players like him are severely underrated by fans who like to have a good knowledge of their own team but refuse to look at the wider world of football.

yeah, he can be our ray parlour of sorts

It’ll be interesting to see if he can force his way into the first team once we have our first choice defense fully fit. Bellerin is actually a fullback, so he’ll be one of the first names on the teamsheet!
Hopefully his versatility won’t see him used in a variety of roles without him nailing down a position as his own.
Mind you, knowing how fullbacks think should help him if he plays farther up the field.

I honestly prefer m over bellerin. To me bellerin is a liability defensively when the CB’s aren’t playing all that well

AMN isn’t as good a defender as HB. And how good do you think he’ll be if even he says he’s not a full back? So I can’t see how you prefer him.

Top bloke Freddie! So glad he is coaching for us.

Ainsley is coming on, if he can get anywhere close to Freddie’s standard he’ll have a great career.

I really like Niles, and think some time out of the pressure chamber will do him some good. He’s still only 22, and has been thrown into a chaotic back line that’s lacking in quality and balance, which can’t have done his confidence much good. He’s played right back, right wing back, left back, left wing back, defensive midfield and right wing, in a team that’s lacked cohesion, continuity, overall defensive quality, and has a clear lack of leadership. I still think Niles can make it as a right back, but like Chambers, maybe a season out on loan playing… Read more »

Maybe a loan next season, if it’s the right loan that will allow him to flourish, set a position and grow into it.

We just lost nacho monreal who had the same versatility just more defensively and he had a good career at arsenal of AMN is smart he will relish getting the game time irrespective of where he’s playing….

Freddie is a great guy- a friend and I heckled him basically non-stop during an MLS game when he was with Seattle, yet he still came over to take photos and shake hands. His patience was admirable then, even after his side lost in an away playoff game on a cold night, so its no wonder he’s turned into such a good mentor and teacher for the younger players at the club. Long may it continue.

Out of curiosity, why were you heckling him? Him being an ex-Gunner and you being an Arsenal fan and all…

have u guys seen this pic of freddie with a koala?!?!! …And Nacho tickling an owl! Henry topless with a cat….why none ever told me about this page. its on twitter and its called footballers with animals! Im going nuts! Why nobody told me bout this Simpsons/Arsenal Meme Page?! Man, i love the internet and nikka! Fucking interlull tho.

Just my opinion but i don’t really see what is so good about him. Like genuine question – what does he actually do? What does he bring that other players can’t or other academy prospects couldn’t surpass in any of those positions? Never understood the hype around him

The fact there hasn’t been a regular right back in our u23 side for the past couple seasons suggest there isn’t an academy prospect who can surpass in that particular position.

As to what he does, after Bellerin probably the best recovery pace at the club, comfortable on the ball, quick, decent passer, athletic, relatively clam for a young-ish player. All round solid footballer. Not every prospect has to be the next Fabregas, solid academy graduates like Ray Parlour were crucial to many title winning sides, why can’t AMN fall into that category?

Doubt this will end well for him at Arsenal by having that mindset. Milner’s a good example. But closer to home, Cashley started off as a striker, right?

more assists than Ganduzi this season