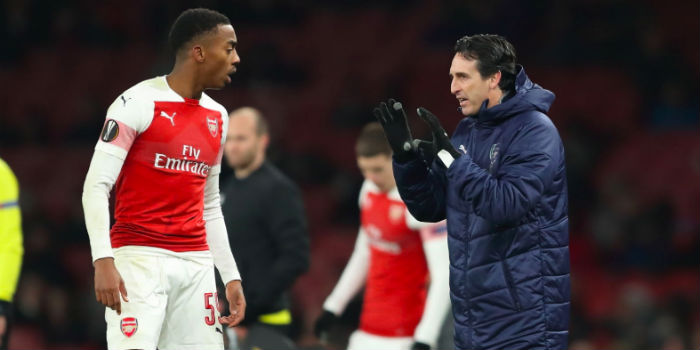 Unai Emery says he has a responsibility to give Arsenal’s Academy prospects a chance to shine in the first team, so long as they impress in training.

The Gunners have had a youthful edge to their matchday squads this season with Joe Willock, Reiss Nelson, Bukayo Saka and Gabriel Martinelli all getting on the scoresheet and Emile Smith Rowe making his comeback from injury.

With Eddie Nketiah and William Saliba set to return from their respective loan deals at the end of the season and youngsters like Robbie Burton, Folarin Balogun and Tyreece John-Jules turning heads under Steve Bould’s mentorship, the future looks bright for those coming through the ranks.

“This Arsenal academy has been a very big academy in the history,” Emery explained, ahead of Thursday’s Europa League clash with Standard Liege.

“The responsibility as a club and as a coach is to give them chances. When I arrived I knew I have a big responsibility with that group, that academy.”

He added: “After is to look for the best performance every time, training, in the matches and also giving the young players chances to be with us. Training, if they deserve to play giving them chances to play. If they are playing having more chances.

“We are doing that. Last year we started working every training with [Joe] Willock, Eddie Nketiah and other players. Players from the academy are closer to us, we want to give them that opportunity.

Emery is expected to include several youngsters in his starting lineup for tomorrow evening’s game with Liege and has already confirmed that both Kieran Tierney and Hector Bellerin will play a part.

Willock: We believe in Arteta and each other

He didn’t even know about willock until Freddie told him. Let’s hope he looks for more young players in our academy because of saka, nelson etc.

He said it was the coaches’ responsibility, a shared one, so I’m not sure why you take him to task about Willock. It seems fans are just looking for things to criticize these days. Some of it is legit, but some of it is pure projection.

It is fair to criticise him though – as far as performances and league positioning are concerned there is no evidence to suggest Emery has done anything of note..

I’ll also add that just because he was told about a player (something that happens at every club) doesn’t mean he has to pick him. If Willock plays, it’s because Emery picks him. Same with Saka, etc.

The only way anyone knows any young player on arriving at a new club is being told surely. Right now i refuse to buy into blame Emery for everything, sure his tactics arent working, or arent working as quickly as I’d like but he has been very open and positive in blooding and giving responsibility to young or youngish players such as Willock/Smith-rowe/Nketiah/Nelson/Holding/Saka/Maitland Niles/Guendouzi. we are struggling to make massive cultural changes, its always hard , look at united, as it happens, Emery may prove not to be the right person to take us forward but i really dont think we can criticise the way he’s tried to make playing for the first team a thing you can do by playing well in pre season, training and cups.
I’m far more open to criticism of the way we are trying to play than how he is bringing young players through.

It was actually Robbie Burton that Freddie recommended to Emery for pre season tour of U.S. he was the player that he didn’t know.

Nelson need to loaned out again. he’s only good for Europa League as far as i can see.

Petty, we are 4th , only lost one game to liverpool, what is the noise for, keep quiet and let the manager do his job. Emery is the BEST man for the job and his recruitment is proof of that. He had to start from scratch by replacing ALL wenger underachieving boys.

In fairness Robbie Burton is the lad Emery wasn’t familiar with until Ljungberg tipped him off, not Joe Willock.

Really enjoying the influx of youth players coming through, great to see them holding their own too!

It was Robbie Burton, Emery did not know about.
During his job interview he pretended to know the young players, but then refused to play them. This year because of the number of senior players gone and the number of games he has to.
Now he is spewing bland general comment, but if he really wanted to know about the U21 players, then why did Emery never attended any of the U21 game last season?

It’s okay to blood more youth but your primary responsibility is to get the first team playing well and winning matches…creating a healthy environment for them to continue their development.
No point bringing more of these boys into a chaotic atmosphere – drastically different from Freddy taught and Bould is teaching them.

Hope Martinelli starts tomorrow! Would be a shame if the confidence he gained from the Forrest game is being put to good use.
And since it’s a game at the Emirates, there might even be a glimmer of hope for Özil to start, right?

I bet he will play, in fact I’m sure of it. He was a beast in pre-season, proved it again last week, and could explode in the next year or two.

I don’t think we’ve seen the real talent of Reiss Nelson yet. Hopefully the Europa League will unleash his talent.

Serge Gnabry scored a hat trick against the Spuds…one of our youth, sigh

Yikes. Look, I don’t like Emery. If I was told that the board had a sincerely great replacement lined up I’d dance a gig to see him pack his bags tomorrow morning. But that is clearly not the case and that is clearly not going to happen. I think, in the meantime, just to avoid complete toxicity, it might be a good idea to stop finding a reason to blame him for the sun being hot and wildly speculating that he is root of all evil.

Again, I don’t like Emery and hope we can move on to a better candidate when such a person is actually identified, but I really think this might be getting out of hand.

One of the narratives that is lost in a lot of this is even Wenger had to “manage” Ozil’s appearances in his last few seasons. Ozil simply did not make certain trips and obviously operated under different rules than the rest of the team. And the truth is, I never liked that. I wishes Wenger was stricter with him. Emery has been and I don’t think it went over well. If you have ever been in a coaching position you will know, if you have in to the demands of the player you but heads with you instantly lose respect and authority over your whole team. At a high level you are dealing with competitive and demanding egos. If Ozil wants to through fits he is making himself unelectable. It’s a shitty reality not entirely of any one person’s making. Ozil shares as much blame in this as the coach. But if an astute and once in a lifetime type manager like Wenger couldn’t get that kind of commitment out of Ozil, I think Ozil needs to take a long hard look in the mirror. Just my opinion.

I blame auto-correct for all typos.

From memory (which is suspect I admit) didn’t Ozil have a recurring back injury at the end of AW’s reign? He certainly played most of the previous season/first half of AW’s last.

In his first season under Emery, he then had the minor issue of the whole of his adopted nation vilifying him for their country’s awful world cup, which essentially boiled down to his race and ended in one of the most public fallings out in football history. But instead of building a team around a now fit Ozil, building his badly dented confidence, Emery shipped out into the cold.

Look, I get the narrative that Ozil might be lazy (his distance covered stats don’t suggest it mind), but I seriously doubt he dictates which games he can miss, even back in the Wenger days. Sure, there were plenty of “sick days” at the end of AW’s tenure but none of us really know what that was (a recurring back injury?).

And his treatment under Emery (since that very public fallout in Germany) has been nothing short of scandalous.

Sadly I think the situation is too far gone now, although hopefully I’m wrong and there is some redemption at the end all of this. We could certainly use him.

If Tierney and Hector are the FBs, could we see AMN in midfield tomorrow? I.d be interested in seeing him, Torreira and Ceballos/Ozil in that 3. Could it be AMN and Willock even? I.m also curious as to who partners Holding at CB, will he play Chambers again? That would be a youthful and promising backline.
Looking forward to seeing how we line up for this one. Auba surely can.t start

Still remember how good Maitland-Niles was in midfield alongside Reine-Adelaide and Oxlade-Chamberlain away to Southampton in the Cup a few seasons back. They absolutely dominated, at a ground that’s often proved tricky for us down the years.

Real same we never saw more of that trio together.

Though it would’ve been a bit of a bugger to have had to type their names out too often, I guess…

6 man midfield – we could really use one right now.

Just wait until they have children with someone with double names.

You got your wish! Niles Torreira Ceballos

We’re overdue to pull a world class talent out of our academy, the last one being Ashley Cole, hopefully Saka or Nelson will end up saving us a fortune.

There’s too much talk about Chelsea youth only because they are local and the coach is local. But I think Emery has better young players than all pl teams. Saliba, saka,willock,martinelli, guendouzi,torreira, give them 2years. Look at spurs team, who is young there? Look at Liverpool an ageing squad, even man city

They’re also talking about Chelsea youth because they bought half the under 18 population of the globe and they’re on a transfer ban.

It’s been great to see the youngsters that we’ve brought in (like Guendouzi) and that have come up through the ranks (Willock, Saka, etc.) do so well in some big matches (vs just the Carabo Cup type of matches) which will really pay dividends I think as the season goes on. The experience they are getting the EL is very valuable and it’s nice to see Emery rewarding those performances by players like Saka and Chambers with starts and more playing time.