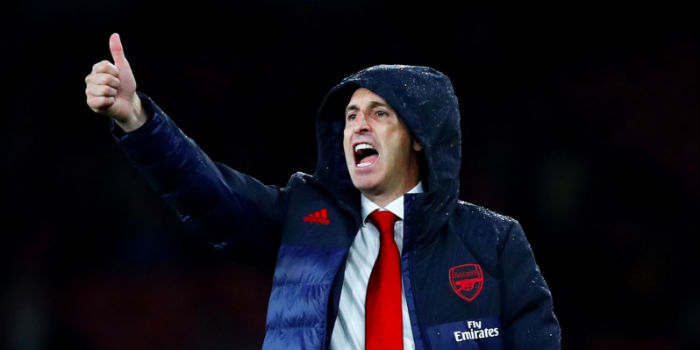 Unai Emery was pleased with his young side’s performance as Arsenal cruised to a 4-0 victory against Standard Liege to open a three point lead at the top of Europa League Group F.

Gabriel Martinelli’s quick-fire brace set the Gunners on their way before Joe Willock extended the advantage going into the break. Martinelli then turned provider in the second half dinking a cross for Dani Ceballos to score his first goal for the club.

After the game, Emery again touched on the responsibility he has for blooding the club’s Academy kids.

He said: “Historically Arsenal have that responsibility with young players, and I told you before that my responsibility now is also speaking with the club and giving them chances.

“We want to give them chances, but we need to find our very high demands in our performance to achieve our targets.

“We are in one process and we want to do it as quickly as we can because our targets for the season are very important to achieve.

“Each match for the young players when they have the chance to play, if they play like tonight or before in the pre-season, then they deserve to be with us and to continue creating our way with them.

“Matches like tonight are good to use them because this competition is an important competition after the Premier League. They deserve to be with us in the next matches and they are coming in at a key moment with a high level. I think they are close with us.”

The boss reserved special praise for 18-year-old Martinelli who took his tally for the season to four goals in two starts. Despite being deployed as a central striker, a position he’s not used to, he thrived from the off, haranguing defenders and taking up smart positions in the penalty box.

“Yes, he played in this position with us and in every training he showed us his hunger to be with us,” replied Emery when asked if he sees the teenager as an out-and-out striker.

He went on: “In pre-season he played in different positions, but above all he preferred playing on the left wing. But also he played as a right winger. I used him as a striker because in Brazil he played this position (centre forward).

“It’s not the best position for him, but the first thing in his mind is to help us and receive some minutes with us in the team. Tonight I think his performance and attitude was amazing.

“I saw him in pre-season and he was working and in each training showing us his hunger. In pre-season he was perfect all the time with us in training, and I spoke to him to be calm because when he arrived with an opportunity to play like tonight, if he continues with this hunger then I think he will do well. Tonight confirmed that.”

For the record, Arsenal’s starting line-up had an average age of 22 years and 350 days; the second youngest in their European history (after Olympiakos away in December 2009 at 21 years and 215 days).

What’s more only Romelu Lukaku (16 years and 218 days) and Mario Gotze (18 years and 105 days) have scored braces in the Europa League at a younger age than Martinelli (since the competition’s rebranding in 2009-10).

He does look like quite a player.
If his preferred position is left wing we suddenly seem over stocked on and side and a little light on the right. Martinelli Nelson and Saka chasing the same spot? Competition is good but I’d like to see a little more competition for Pepe. All due respect to AMN he doesn’t seem quite the same level.

Looked like a young RVP, the way he runs!
However his work rate tonight was unbelievable..

Naa he looks like a sharper, faster Suarez. His scoring instinct is too good to waste it on the wing. Looks like he’ll move to the middle sooner than Ronaldo or Henry did..

I don’t usually get carried away but the player he reminded me of with his movement and verticality and all round technical play was Di Natale. A huge favourite of mine from years ago. Its wonderful to watch him.

Of course, we need to be patient. This may just be a purple patch. So Im just going to enjoy it without expecting and theorizing on it too much.

Tbh, the whole team looked hungry for the win. What a stark difference to the performance we saw over the weekend. Obviously the quality of the opposition had something to do with it, but I enjoyed watching them play tonight!

How on earth are we going to manage to play Auba, Laca, Eddie and Pele 2.0 next year? Eddie is a clinical striker, but I just get so much more excited about the Brazilian!

Let’s just support xhaka, show our love to him as a captain decided by the team..they want xhaka to lead them..xhaka needs to sort out his issues..which I believe he is working on now..after a string of bad, reckless , brain farting moments performances by staying on his feet will make the difference..Emery must not select Xhaka if he doesn’t perform so that Auba can be the next captain while Xhaka captaining from the bench..Mertersecker did that..

Xhaka’s problems are just from mistakes. If that was the case he’d have a longer leash with fans. It’s General weaknesses in his game and limitations that force or team to play a different and less functional style when he is out there. He doesn’t fit the league and he doesn’t fit the style of football we see the team play successfully without him – fast free flowing attacking football that isn’t overly exposed to breaks itself.

I cannot disagree on that.

Unless he scores just as many goals from wide.

Or assists just as many.

It’s all looking pretty exciting. Especially if the likes of Saliba work out.

I mean, we’ve all of use been through quite a few youth projects for the last 10-15 years, but this seems different somehow, no?

I saw glimpses of our Arsenal tonight. Pressing, movement, determination to win. Hope the older players get scared and start to perform as well.

Judging by the dire performance of the first team, I think these youngsters are playing off the instructions and training they’ve been getting in the past and nothing to do with the current manager’s tactics. I’m sure as soon as they adapt to his dull cautious methods they’ll too lose their free flowing mojo and adapt the boring Emeryball just like their senior counterparts. I’ve nothing personal against Unai but I think the sooner the club gets rid of him the better for the good of the club’s trademark brand of beautiful, easy to watch attacking football instituted by Arsene… Read more »

All other things aside, it’s not his fault he’s not english. Club hired him, he tries his best. No Wenger, surely, but at least he’s trying. The club should hire an interpreter if they deem it necessary. I’m just as tired of watching our alleged “first team” try to lull me to sleep (only thing keeping that from happening is my frustration, which far outweighs the boredom) – but it’s hardly his fault. His english is a lot better than my spanish. Probably yours too.

Hey guys I have a question I have been obsessing over since we signed Martinelli and was wondering if anyone could help answer it. Before we signed him he had played two seasons for Ituano Fc, who from what I can work out play in the São Paulo state league (so a regional level of football). They had a decent cup run last season, and gabs scores six goals for them. What is the process of scouting a player like this? Statistically he was not insanely good for Ituano, and considering the São Paulo state league must be a significant… Read more »

Probably word of mouth. The coaches talk to other coaches and talent gets noticed at young ages. Remember reading this article when we signed him.

It was the Edu factor

I’ve got the answers you need. Attitude, Sufficient skill, Hunger or things that can be turned into hunger. When I looked in his IG when we signed him, I thought this is a world class guy, he’s got a serious girl too, At that age.

Yeah having a read of that bleacher report article he seems very very mature for someone so young. Long term girlfriend and very involved family, so hopefully he stays humble, keeps working and keeps scoring. If he does, the fee we paid could be an absolute bargain.

I think this line up can beat MU easily

It’s not the best position for him? Seriously?
The guy shows so much promise.. Positional sense and instincts.. How is CF not his position..

Sounds like there is a club directive to put as many youngsters in the team as possible. It’s no wonder Emery has asked them to concede possession. So they can concentrate on their own game. Once we have a stable back four and Lacazette back, I think we will see the 4231 that Emery is planning to use. By which time the youngsters should have progressed enough. I believe Willock/Torreira as the central pivots and Guendouzi in a free role, swapping with Willock should be good enough. Ceballos coming in off the left wing like Ozil usually does will satisfy… Read more »

Of course if Laca is back then Auba will play left wing.

From the sidelines, Emery looked like he really enjoyed every attacking phase we had. Lets hope he internalizes that and starts to build toward our strengths.

You can’t imagine how hard Emery’s job is.