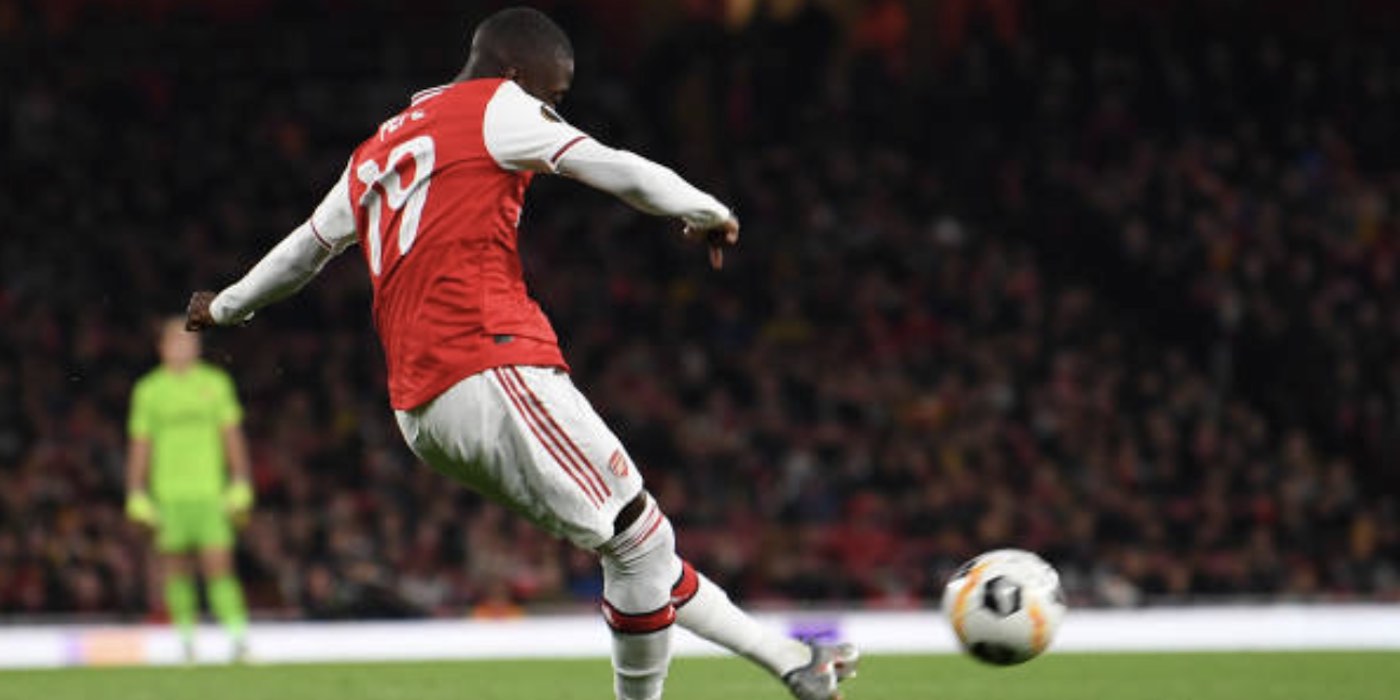 With Arsenal 2-1 down to lowly Vitoria at the Emirates last night, the introduction of Nicolas Pepe for Alexandre Lacazette was our last substitution and our last attacking change.

Having not scored since the penalty against Aston Villa, all eyes were on the Ivorian to see if he could get his first goals from open play. He didn’t, but the two free kicks he scored were sensational, and capped the 3-2 Arsenal comeback on the night (see the goals in the match report here).

Speaking afterwards, Unai Emery reiterated his belief in the £72m man, and revealed the goals were reward for some training ground work from the former Lille man.

“Pepe is a very good player and we believe in him, totally,” said the Spaniard.

“The way he’s going, sometimes he feels better, sometimes it’s with more difficulty on the pitch. It depends on the opponent.

“He’s improving and tonight those two goals are really important for us first, and then secondly for him. He’s continuing the adaptation in his process and as soon as he can adapt, that’s better for us.

“We are very happy for him and for us because those two goals, from two set-pieces, were perfect.

“He was trying a lot of set-piece shooting on the training ground last week and I was watching his shooting, because I was also positive in that situation when we can have players like Pepe, Aubameyang, Lacazette, Ceballos or others to shoot.

“The most important thing is the three points and that some individual players can improve, that they can take confidence for us and for them.”

It’s a good confidence boost for Pepe, and the team, ahead of Sunday’s must-win Premier League clash with Crystal Palace.

For more on last night, check out today’s Arseblog

No kidding ! A player practicing ! You only see it at Arsenal thanks to UE…

Come on! Is that a stick you’d beat UE with?!
This is about Pepe. You don’t have to make everything at Arsenal be about your fav player, you know.
This is about Pepe. Let him have his day in the sun. Don’t you think Pepe at least deserves the commendation?

I hope, he will be practising enough in the future to deserve his place in the match squad 😀

Now if only you could only fix the game too so we can win against the mighty Palace will be great.
I don’t know why every time Benteke and Zaha play against us they performe like Messi.

I just had the mental picture of Benteke dribbling through a crowd of defenders like Messi does. Maybe Zaha.

In the last arsecast the next game was Sunderland, now it’s Villa – all well, blogs?

Come on man, I know patience is thinning and we are all frustrated. But have some respect and remember you’re an arsenal fan. We all had a good laugh at the #out of other clubs. Let’s not be those guys. We’re better than that.

We literally made the #out a thing with Wenger. A bit too late for that. Either way, we can wait till the end of the season and reach the same conclusion, Emery has no business managing a club as big as Arsenal. We’ve regressed under him, yet hes under the impression he made us more competitive. Clown.

And you can fuck off to someplace else to spread your toxicity.

No. We do not do that. We are Arsenal fans. We have class and respect. Emery is not doing well, he can be frustrating but he is currently our manager and any toxicity needs to have merit. He is praising our player for his individual work on the training pitch in this interview. There was absolutely no need for that. Cut it out.

He kind of crossed a line when he said things are better now since he has arrived. We are Arsenal fans and we have class, but we are not stupid. The bastard deserves some stick from us.

Emerys English is hilarious. Good on him for learning though.

his English israeli an adaptation first and second he can be protagonist, better sometimes, sometimes not better. bit still with mentality, all players even mavrapanos, tierney, guendouzi is understanding perfectly the instructions he is giving, as for ozil he was not understanding to be protagonist one day but now is trying to improve. fulham.

Any excitement I have when I think about the heights this team is capable of attaining with the likes of Pepe, Martinelli, Saka, Auba, Guendouzi et al, is tempered by my loss of confidence in Emery. I don’t think we will ever see the true potential of this team except Unai changes his philosophy…or leaves. I was really excited and expectant after his appointment. But the whole euphoria has evaporated and I am struggling to retain any modicum of faith in him at the moment. Liverpool away was the turning point for me; my pride as an Arsenal fan was… Read more »

Can we practice defending and attacking?

Kieran Tierney is a Catholic.

Tune in next week to find out where Ce-bear-las shits.

At least somebody is practicing something. Maybe next time practice some defending and attacking… All joking aside I am really delighted for Pepe. He needed that.

But I just can’t understand most of the things Emery is trying to say. His English hasn’t improved at all. He has better vocabulary but he makes even less sense than before. I love that every publication including arsenal.com has given up on summarising what Emery has said and are using only direct quotes.

Emery out, I hope blog does a post with that caption, then we know the fans are unanimous

Really starting to dislike Emery.
Defensive minded football against shite teams yet still shite defensively.
No creativity in midfield, doesn’t even have our most creative player on the bench.
The best DM of our squad plays at No.10 so he doesn’t have a good game and he doesn’t have to drop his favourites in the league.
New LB fit still doesn’t play him.
Absolute bollocks in press conferences.

Honestly been supporting him till the Sheffield game but I hope he gets the sack. We are now playing worse football than Arsene’s teams played in his last season.

Ya gooner
Reply to  Amusa

Whatever happened to the game is won in midfield. We seem to set up to play on the wings and bypass any build up from mf which usually ends up in a defender’s u. Playing torriera am is laughable btw.

I really like Torreira, am always impressed when I see him for Uruguay or last season with us, before he ran out of steam. Last night, I thought his major contribution was getting smashed, unnecessarily, by a defender to set up Pepe’s first free kick. What do all the people who say “the modern game does not use a no. 10 and that’s why Ozil is useless” have to say about Torreira playing there?