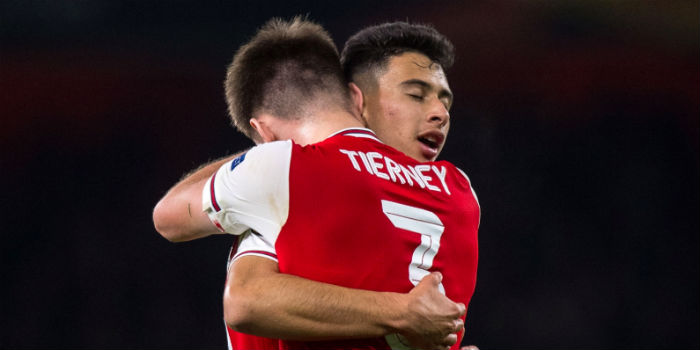 They may not have been teammates for long, but Kieran Tierney and Gabriel Martinelli already seem to be on the same wavelength.

For the second Europa League game in a row, the Scot delivered a cross for the Brazilian to head home, this time to help the Gunners get on level terms against a sprightly Vitoria.

Arsenal went on to win the game 3-2 courtesy of two stunning free-kicks by substitute Nicolas Pepe and are now in a commanding position to qualify from Group F.

After the game, Tierney said he’s been impressed by his fellow new arrivals.

“I love playing with Gabi, even in training as well – but I hate playing against him!” he told Arsenal.com. “He’s a great player.

“You can see how clinical he is in front of goal. He’s good at everything – there’s not a negative I can say about Gabi. He’s got the lot.”

On Pepe, he added: “That just shows you he is a special player, and in a moment like that he can produce a bit of magic. That’s what we needed.

“It will be massive for him, it’s a hard place to come and hit the ground running. It’s a massive club, in a massive league. He deserves that because he’s been working hard every single day.”

Ok, shall we just make Tierney captain and be done with it?

The no-nonsense vibe I get from Tierney feels like a throwback to the old times. Fits perfectly for the image and personality you look for in a captain.

Joking aside, I think we could be looking at a future club captain. The way he handled the transfer saga was mature and loyal. And he seems to be a confident, humble and determined individual. The perfect mentality for a leader.

Really hope he plays Sunday but I think we may have to wait for a Kolasinac mistake. So he’ll probably play next weekend…

Would you just give it to the player with the most swag?

Love that his mum still cuts his hair too. Proper old-school down-to-earth player.

shhh. lest Emery hears you!

Excuse my article-unrelated comment, but I saw mentioned elsewhere that Emery sets up his team according to opposition as if we’d be playing Barcelona week in week out: I actually saw Barca play on Wednesday against Slavia Prague on Wednesday. And the game reminded me of so many things I almost forgot when it comes to Arsenal: especially the presence of huge emotions football can bring, as well as that you can watch your team lose and still feel very proud of them – because from 25th minute onwards, Slavia was arguably the better team and Barcelona was seriously fearing… Read more »

what is your point though?

Jack but
Reply to  Imustafiyou

True, re-reading it after myself, there’s none, so: – you can actually sense a shared vision among the club, the players and the supporters at the stadium – something Emery talks about a lot – there’s not a single fan unhappy about the coach right now as when you’re moving in the right direction, it’s for everyone there to see – you don’t need to have lengthy discussions about it – if Slavia Prague can stick to their football against the likes of Barcelona, surely Arsenal – with arguably way better players – can stick to theirs against the likes… Read more »

I was at the game, since I live in Prague and Slavia is my club. All of us were very proud. Slavia’s worth is 40 mil EUR and Barcelona’s over 1 bil and we had pretty much the same amount of possession, chances and even more shots. If you look up the stats, you can see that Slavia has the most distance covered in all of CL. They are insanely well physically prepared. That is their main strength. They will run the whole match, press hard from the 1st to the last minute and make your build up a living… Read more »

Slavia remind me the team of Sparta Prague under Hrebik, in the way of physicality and the end of an era. The important part might be the era/timing. I think both Slavia and Sparta is/was successful, when the football comes/came through the transition period. Nowadays, the era of Spanish technical dominance is vanishing and football of strength is on the increase (e.g. Liverpool is successful with technically dreadful midfield, something unthinkable a few years ago), it is kind of a sinusoid as it used to be with everything in life.

As I am from Czech, I can name the whole Slavia squad 😀

I’m going to enjoy watching him play and grow. Hopefully we can keep him out of Madrid’s/Barcelona’s grubby paws when they come calling…..

Only if we improve as a team. Players don’t like to play for shit teams and right now we are shit. The main point about Slavia is their supporters know 100% they are heading in the right direction, we don’t even have a direction, we are spinning in circles. There are green shoots, Martinelli, Guen, Pepe, but those green shoots are the players not the coach.

Jack but
Reply to  Jack but

Luke
Reply to  Jack but

Do you have letters missing on your keyboard?

We have really missed Laca hard work and build up from with back to goal.

If Martinelli played central he would provide something different than Auba and Laca, especially with his heading ability.

With the work rate he is showing, I feel Emery maybe tempted to pair him with Laca and ask them to press from the front in certain games.

Pepe tracks back when it is critical but doesn’t have the aggression to win the ball like Martinelli does.

Last night we seen why Tierney, Bellerin and Holding have been held back, Holding and Bellerin looked understandably rusty, and Tierney showed real quality in the final third, but went down with cramp towards the end. I think all 3 will find their way back into the first team, but it’ll be a few weeks away yet, with Bellerin looking the furthest away. It was interesting to read we had minor concerns about Saliba’s body composition, it looks like our medical setup is much better than it was a few years back. Tierney’s will need to be managed after his… Read more »

Xhaka looks like a stranger with the whole first team

Most onto it comment I’ve seen in a while… the down votes are worrying for the intelligence of our fanbase.

Martinelli has all the qualities to take the EPL by storm in the seasons ahead.
His insane speed, skill and workrate, laced with an infectious desire to win puts him in stead for a long, successful career.
I hope and pray that will be at Arsenal.
But we’ll certainly grapple with more than mere envious glances from the spanish two-some in no distant time if he keeps going at this rate.

That workrate!! You can see he really goes for it a bit too hard at times, but he’s learning and at some rate. But really with all the technical skills he has and then that speed and workrate to cap it off – just wow! Exciting prospect. Oh and what about his movement off the ball, he just knows where to go and where to be too.

I never thought I could fall out of love with Arsenal, but if the pictures of Mourinho at the Grove last night are real? It’s a real worry. I quite like listening to him on SkySports, but I don’t want him anywhere near our dugout or training pitch. He has no form whatsoever with managing or developing youth, has a history of temper tantrums when things don’t go his way, and I think we need a project manager, not a short term fix. I think Emery deserves more time, but if the toxicity surrounding the manager continues? I think we’ll… Read more »

What a signing. For all the flak they get for the ones that aren’t good enough (do I really need a list?) our scouts (+Don Raul +Sven) deserve huge credit when it’s due! To think that you could buy two tierneys at the price of one aaron wan-pissoff makes me happy. Also, really appreciating the ‘throw-back’ players in the form of Tierney, Martinelli, and Guendouzi. They seem to genuinely appreciate what it means to fight for the shirt. There was a moment late in the second half vs. Vitoria when Martinelli won the ball back near our right back, dribbled… Read more »

A bottle of Martinelli

Both of them are going to be huge for us as long as Emery leaves and a proper coach comes through.

That cross was a thing of beauty. Had just enough loop to clear the defender and was straight onto Martinelli’s head with enough pace to help the striker.

So refreshing to see someone who can provide that like clockwork!
I like how tough our Bosnian tank is but his final delivery can definitely improve.

By the look on Marinelli’s face it seems that Tierney is good at something too.

From what I see, I totally agree. Martinelli is strong is so many aspects. From his movement and where to go and be both inside and outside of the box. His determination to hussar and get back. Then the timing and execution of nicking the ball away and starting attacks (not just sliding in with effort. Real defensive ability). His pace and ability to use it to get past opponents combined with good technique and timing. Calmness in possession. Awareness of players around him and runs they make. His finishing is decent and will only get better as he experiences… Read more »

I hate that Emery has got the players saying “moment” 🙁