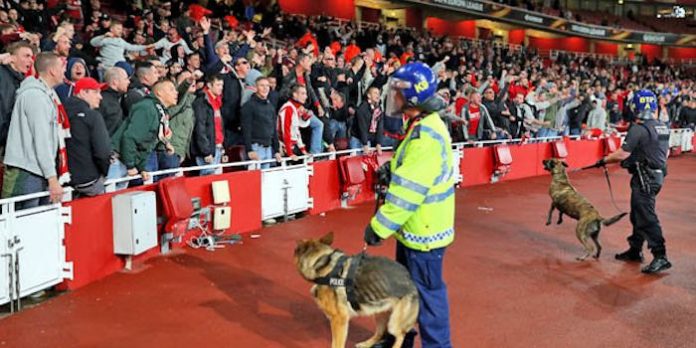 Arsenal have confirmed that restrictions will be in place for the sale of tickets for our Europa League clash with Eintracht Frankfurt at the Emirates on 28th November.

Yesterday, UEFA upheld a decision to ban Frankfurt fans from the match and the Gunners, after discussions with the police and local authorities, have decided that they can’t risk tickets in the home end falling into the hands of those travelling from Germany.

As a consequence, tickets will not go on sale to Red Adult or Cannon Red Members. Additionally, the Friends & Family and Ticket Exchange Service will not be in operation for the match.

Arsenal have warned that if home tickets do fall into the hands of Frankfurt supporters, membership cards will be cancelled.

The match will count as a Gold Member cup credit. However, anyone else looking to attend will need to be Silver, Purple, Silver Cannon and Junior Members who renewed or joined the Arsenal membership before 12noon on Friday, August 30, 2019.

Arsenal received a ticking off last season when thousands of Cologne supporters registered as home fans to buy tickets in home sections of the stadium.

When stewards started to prevent them from entering the stadium, it caused all manner of problems including a lengthy delay to kick-off. Cologne were forced to pay over £50,000 for damage done by their supporters and received a one-match away supporter travel ban.

We suspect the stadium will look very empty when Frankfurt visit, but we look forward to the club announcing a 60,100 capacity crowd all the same. ?

Sweet news, so from a dire attendance to a dismal one… can this season end already?

How many Frankfurt fans do you reckon Auba can fit in his box?

Football has become so deeply unpleasant. Every other article is about fans getting shafted, fighting, racism, cheating or corruption. Almost every thread is full of vile comments and abuse (thankfully not arseblog). I can’t wait for the bubble to burst, even if it means us going down with everyone else. Maybe then I may start to take more of an interest again.

So true. Over the last years, i have lost my interest in the “beautiful game” which has become as you mentioned above. Being a curious mind, i wanted to comprehend why UK uses it’s VAR differently than Europe does. There is a lot of talk of “manipulations”, mind you even before VAR, but it does suggest that UK has a different agenda(whoaa) than Europe?

I can’t believe that we’re talking about Red members not making this game versus the fact that in 2019 we have a violent security issue if fans from another team sit next to each other.

Look American’s are basically idiots nearly all the time but we don’t have to restrict tickets on account of which team you happen to be born into supporting.

just another fan
Reply to  Joe

Well said, it baffles me how much fan violence is in Europe too. Since they’re ahead of us in many aspects of society and often come off as sophisticated, you’d think they have more respect for each other.

So … Arsenal Red Members have in effect been banned from watching their own team due to the actions of fans of other clubs fans at a game in which Arsenal weren’t involved? Sound fair to anyone?

Shocking, ain’t it? Hardly a surprise that people (not just at Arsenal) are losing interest. The game simply isn’t about the fans anymore and this only serves as another miserable example of that sad fact.

It is very stupid indeed

What I detest is it says other membership people are trustworthy but red isn’t……Is that anyway to treat your fan base?

Better the Devil You Know
Reply to  Leslie Crang

I think red level membership is easy to obtain and buy tickets for europa.

In a round about way -yes. Not because of Arsenal fans though but because anyone can buy a red membership at anytime if I remember correctly (you can buy one just so you can streak on the pitch in a single match and never go to a game again?)

Football for the people. ??

Well, there will be more atmosphere in a graveyard than at the Emirates then!

It’s alright, it’s only the Europa League, nobody gives a toss about it anyway. Right?

Even TVs should be banned from showing the match so that only the Arsenal Owner and board watch their thing.

Oh they wouldn’t watch it anyway

Another example of the club/police not really understanding the situation or crux of the problem. Red members are the ones going to Europa games, banning them doesn’t solve anything if ST holders can still sell on.

Couldn’t the club have put a restriction on membership join date (pre 30th Aug), and blocked physical tickets, pdf tickets and ticket transfers meaning entry to the stadium is only via your membership card for a ticket you have purchased?

Of course there would have been ways around the problem but that would have involved thinking and there doesn’t appear to be much brain power around the Emirates these days.

they have for the other echelons of membership.

Ok so as a red member i guess fuck me right? I deserve this?

I’ve never left a comment on these boards before but this is an utter disgrace and I feel compelled to write something. I’ve been a red member since I was 16, buying my membership in 2006. I have never been offered a membership upgrade and have been to 10+ matches every season since 2011. As a result of the ticket exchange there has never been a match I’ve wanted to go to and not been able to – until now. I’ll be writing to the club about it, but I sincerely hope there can be a fan lead response to… Read more »

Don’t worry, I joined in 2006 as well and got silver membership this year – you’ll probably get upgraded soon. I know it doesn’t help now, but it will be much easier to get tickets once you’ve got it.

Deffo mate, you get my, and undoubtedly countless other Gooners’, backing. I hope they listen.

Mine is a very similar story to yours. Perhaps the relevant people at the club don’t believe there’s enough time now to put a robust arrangement in place, but there was ample time to plan while the appeal process was ongoing if the will to do so had been there.

This is a disgrace, as a Red member the Europa League games are the only games I can guarantee getting a ticket for my son and me, now I have been denied by another clubs fans. At the time when the club needs all the fans they can get, they are doing a fantastic job of alienating us even more.

Surely there’s a way to still allow Red members to get tickets by putting restrictions on it, by say only allowing sales members that have bought 2 or more tickets previously? Or accounts that have been members for longer than 2 years or something. That shouldn’t be hard should it?

Football administration and good logic don’t go hand in hand, do they?

Why couldn’t the Club learn from the Cologne experience and actually come up with a solution – instead of this knee jerk nonsense that punishes its’ own supporters? Staggered.

Nice to see Blogs keeping order at the ground in that photo!!

I’m planning to go from South Korea to London to watch this game. But Arsenal stripped me of the right to watch the game. Arsenal induced the purchase of memberships by allowing them to watch the games if they had memberships, but did not allow the Red members to see them. In London, Korea is not a place to visit, as if to visit a neighbor. It’s a long way. I invested a lot of money and time. I think Arsenal should compensate the Red members.

as an Arsenal Fan from Austria its expensive and often very difficult to get Tickets, so in the last years i prefered to travel to league cup and Europa league matches as a red member via our Fanclub in Vienna. So not only the teams performance gets worse…. such a difference to the ice hockey games in Austria where the fans share the Arena and can have a beer together in a vibrant but friendly atmosphere so you can take your kids with you……

meow
Reply to  frank from Vienna

I would prefer the Emirates to be a cauldron of pure hell but that’s just me lol.

This somehow reminds me of Blackadder 4.

Should be easy getting them through those turnstiles.