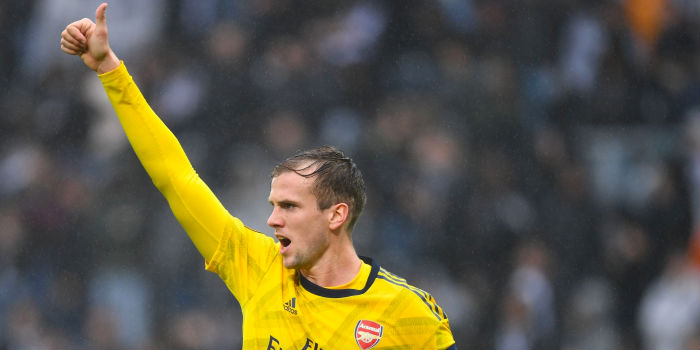 Rob Holding insists Arsenal are not at ‘crisis point’ and is sure that the club can close the gap on the top four with a couple of wins on the bounce.

Having slipped from third to sixth in the Premier League during a disastrous four weeks of football sandwiched between the October and November Interlulls, the Gunners have it all to do if they are to achieve their stated ambition of qualifying for the Champions League.

While Unai Emery has been given more time to turn things around, there’s no hiding that the players need to put things right on the pitch starting against Southampton on Saturday.

“We just need to string a couple of wins together and I think that will lift the confidence again and hopefully set us off on a run,” Holding told Sky Sports.

“We just need to stay calm and stay positive. We’re sixth, we’re not a million miles off it.

“We’re going into a busy Christmas period now where there’s going to be three Premier League games a week.

“We’re eight points off the top four but if we have three wins in a week we’re back up within touching distance so it’s not crisis point by any stretch of the imagination. We need to keep calm, keep positive and keep working on what we need to improve on.”

In addition to overseeing just one win in seven games, Emery has also copped flak from supporters for the way he’s dealt with the club captaincy.

Granit Xhaka, handed the armband several weeks into the season following a player vote, was stripped of the honour earlier this month after a public spat with Gunners supporters who jeered him off the pitch in the 2-2 draw with Crystal Palace.

Pierre-Emerick Aubameyang has since taken over. Holding thinks the Gabon striker will do a great job and that Xhaka, who has been linked with a January move away from the club, still has the support of his teammates.

“Pierre’s great in the dressing room. He’s such a happy character so everyone is positive around him.

“He knows how to lift people and he leads by example on the pitch. Having someone like that up front, scoring goals for you always make things easier.

“He’s a great lad to have around the changing rooms and I just think what happened with him was between him and the fans and that is nothing to do with me. I just know I can support the team and support Granit.”

He is here still. And I was thinking earlier about his barring of teeth during games, you would think we are going in for a kill.

Sagebrush farm – Beware of those fangs, mate. As quick as you can say “Lose a two goal lead”, old Dracula will have your neck.

Good ebening, Frog. Yes, Dracula is still in the house, sucking the life blood out of the club as we speak. Did you honestly think our hierarchy would do something sensible, like sack him? Keep it ‘realistic’ mate……

Raul should be doing everything he can to convince Poch to come to Arsenal as what he’s accomplished is truly impressive. He’s operated under much lower budgets than any of the other top 6 and has constantly put up competitive teams. He’s also turned a bunch of unheard of young players into stars.

There’s nothing from the past 18 months to suggest Holding is right – we lack the consistency to make the top 4 & if anything we’re too high in the table given expected goals etc.

His Sp*ds link won’t let him come here. Poch said the only teams he won’t coach are Barca (because of Espanyol) and Arsenal.

I’d take him in a heartbeat for the record.

Really? I wonder if George Graham said the same thing about the Spuds in 1998?

Maybe he’ll feel differently after being fired. But probably not, he seems like a man of honor and principle.

You know whether or not he comes to us I’m pretty chuffed he’s gone. While I never had and problem disliking Sp*rs I found it difficult to dislike Potch. No such problems with the new guy.
If they can go ahead and follow up this move with swapping Son HM for somebody properly twatty then I’d feel much more comfortable.

As much as I would like Pochettino to join us as you do, I think he will be loyal to Spuds fan and would not become Arsenal manager.

Nah – fans ascribe way too much loyalty to players & coaches as a general rule. Very few if any grew up as fans of the team they work for so most look at it like you likely do as an employee- who will pay you the most money with the greatest career arc. The main issue we’ll have getting Poch isn’t due to him managing Spuds- it’s the fact he’s done such a good job that he’ll have far bigger options than us.

Me2
Reply to  Atom

I’m sorry..
What Poch has accomplished is truly impressive?
A couple of top four finishes when both Arsenal and United are in terminal decline is not really much…..
I would HATE him to come to Arsenal for the simple fact he is ex spurs…
Besides Arsenal will go for the cheapest option…

Atom
Reply to  Me2

He basically accomplished what Wenger did during our stadium paying years but in a far more difficult environment as the top 4 is much harder to make now. From 2016-2018/19 [email protected] had a total net spend of 41m. Arsenal spent 158m net during that period for reference & city over 540m. He’s extremely well respected coach which is why he’s being linked with Madrid, Bayern and other top jobs and is proven in the PL.

Poch told his players to concede 7 to Bayern so he could get a job at Bayern, it was all prearranged.

Licor de Avellanas
Reply to  Me2

Did you hate Sol Campbell as well? Just curious…

No, but he is Sol Campbell.

Holding is economical with the truth,cos you can’t be outta crisis when emery is your coach

Maybe Bobby Sacramento’s not but Arsenal is.

I still want emery out even if we beat Southampton, beating them is not a sign of improvement, not at home anyway,,

No Rob, I think we’re there. Or we most certainly will be if nothing is done now!

It is my opinion that we have a full blown crisis on our hands. We have a difficult schedule for December. I predict 3 points above relegation zone by Jan 2 2020.
Some good news, Rottenham Coldfeet Bottle Jobs are eating poison! They have employed Mourinho, so we will be seeing him soon…Kick his ass!

Leave holding to his window dressing

Man the club PR team is overworking sending out players to convince fans things aren’t as bad as they seem, just hope the board is working as hard to find a suitable solution or manager to fix the results

Sorry Rob but whilst I wish this were true, I can’t see it happening. Keeping calm and staying positive is the minimum that will be required for achieving top 4. At this point, it will take a HUGE turnaround in performances which, given previous results and track record, is highly unlikely.

Liverpool have double our points. We are 8 behind Chelsea/Leicester. Man u and the spuds who apparently have been infinitely shitter than even we have are just a point and 3 behind us. That’s without looking at out internal problems.

Ridiculous notion to think we are comparable to Spurts/Ponchenttino yet …albeit we are not that far off. OTOH, somewhat callous of Spurts to just drop Ponch. He has struggling this season but he has delivered beyond their usual standard and in the first real season he has had issues, they don’t have his back. Looking at the table in 14th spot, they aren’t very much far off of us so I’m not sure what they were thinking other than hopefully they have someone-else in line (other than ahem Moanrinho) I would like to think we are slightly more circumspect. At… Read more »

I think you’re going a bit off topic mate. Ox and Gnabry situation was ages ago. Meanwhile, in the here and now, we have shambolic football from a bloke who can’t communicate.

A P
Reply to  Santori

OMG, you describe our recent form as flattery to deceive? Nothing deceiving there.

Define crisis: when you go into a game against Leicester City knowing full well you will get mashed.

When you lose 2-0 to Leicester and think “oh the players did well. I thought we’d get totally pasted”

Not as deluded as Daniel Levy.

Does anyone else think that these players coming out and making such statements is a reflection of how weak we are becoming mentally.

Maybe I’m wrong but given Man Utd and Sp*rs shit start and Chelsea’s transfer ban I would say being outside the top 4 at this stage is just not good enough. Not acceptable to the point it is a crisis.

I fear we, as a club, accept mediocrity.

No, we’re not at ‘crisis point’… we’re past that and into the ‘hilarious mediocrity’ phase.

That’s a rather generous reading of the league table. Yes we’re 6th but on points we’re far closer to 14th than 4th. Fail to beat Southampton and we’ll likely be firmly in midtable!

Shit manager+ shit ex capitan + shit tactics+ no confidence= NO TOP 4 FOR YOU!!!!

I’ve supported Emery because I think we’re a club in transition, and transitions are sometimes painful and take time, also I couldn’t see a obvious and available replacement, the last thing we need is change for change sake, and a revolving door of managers. For financial reasons I just didn’t see the club spending £10-£15 mill to sack Emery, and then go and pay compensation to take an employed manager of any substance, it’s just not the way the Kroenke’s operate… But we should 100% sack Emery, if we can get Pochettinho… If we don’t at least makes serious enquires… Read more »

He’s right, we’re not in crisis, as long as our ambition is to avoid relagation. In which case all is peachy. Maybe if we miss European football next season it may work for us, the season Liverpool didn’t play midweek games they almost won the league, which is pretty good for Liverpool. I know money becomes an issue, but we’d have sold Auba and laca so we’ll have a few quid to bring in callum Wilson or some such quality replacement.

Dear Robert. Yes we are. You’re a good lad, a cracking player and definitely one for the future. Don’t spoil it by talking utter bollocks.

To be fair to Rob, if he’s being asked questions by a journo what else is he supposed to say?

“Yeah it’s clear defensively and in midfield we are a mess and as a team we lack discipline and general basic coaching across the board”?

I guess the bar is pretty low

Couple of loses and relegation battle. I am so deluded with Arsenal at the moment that I hope for relegation.

Start focusing on being Cannavaro again, Rob. The original one, not some knock off.

“We’re eight points off the top four but if we have three wins in a week we’re back up within touching distance so it’s not crisis point….”

Well – that is IF the teams above us drop points too!!!