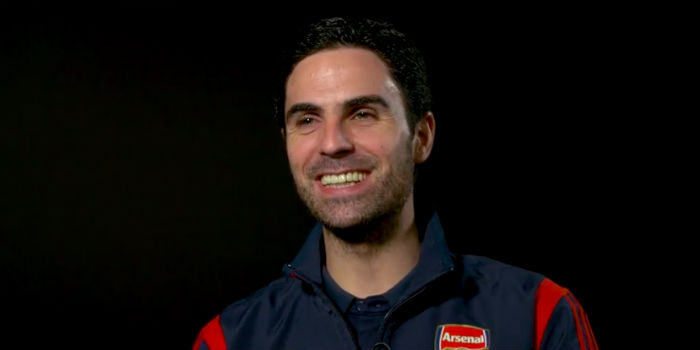 Mikel Arteta put the Arsenal first team through an evening training session at Emirates Stadium as he stepped up preparations for tomorrow’s clash with Chelsea.

On the eve of his first home game in charge, the Spaniard revealed that he always knew he’d become the Gunners boss and that he’s determined to enjoy every step of his journey as a coach.

The last time Arteta sported Arsenal colours at the Emirates was in May 2016; the occasion of his final game as a player. It turns out the farewells that day were only temporary.

Speaking to Arsenal.com, he recalled: “I remember the last time I was going down the tunnel, with my kids in my arms. I said to my wife, ‘One day I will come back here as the manager’. It has come a little quicker than I expected but that was a dream.

“I’ve got more family now – I’ve got more kids! I’ve had more experiences but I had a very clear idea of what I wanted to do so, two years before my retirement, I started to do my coaching badges. I already had that feeling that I wanted to try this game over that line, and I am really happy where I am.”

Having endured a frustrating end to his playing career – injuries took their toll in his final two years at Arsenal – Arteta said he now has a new perspective towards his life in football.

“I am more excited than them [the fans], for sure,” he said. “I walked into the stadium this afternoon for our last training session and a lot of emotions and feelings came through. It will be a special day for me.”

He added: “I am trying to enjoy it more, and I am enjoying it. This profession deserves to be enjoyed a lot.

“A lot of things happen along the way – injuries or situations that you have to face – that sometimes doesn’t allow you to see the whole picture. But hopefully I have people around me to pinch me a little bit every day and say ‘Look where you are, enjoy it.

“‘Work as hard as you can and make the most out of it and try to be professional, but at the same time, you know, this is a reward for what you’ve been preparing for.'”

May our Mikel lead a successful era! Been so impressed by his interviews.

You do wonder quite how Unai out interviewed Arteta.

Maybe Raul talked in Spanish with Emery but I’m reliably told from Spanish friends that even his Spanish is a bit all over the place.

Arteta is the kind of guy who comes in for an interview as a cleaner and by the end of the interview they ask him to be CEO of the company.

And I am determined to enjoy having you as our manager for a long time.

The more i hear him, the more i believe he is the best and right choice as our manager

The way he talks you can see why he’s been top of the shortlist in our last two managerial appointments.

And they went for the other plonker the first time around . Cheers Ivan

The Unai Bomber
Reply to  sami

Can the lone downvoter on this thread reveal and explain their reservations or kindly fck off to The Wetherspoons Stadium N22?

Please beat the crap out of fat Lamps and his abominable bunch, and let’s see where that gets us going into the new year. #COYG!!!

Football is an Arteta

COYG! We’re winning today. I can smell it!

He’s so focused and professional when talking football but every now and then, when asked about Arsenal, this brief episode of goofiness breaks through in his personality. Only for a split second and I love it. He truly loves this club. It’s brilliant.

Arteta is amazing!!! He knew he’d become Arsenal manager??? Neither Raul nor Kronke, Edu had planned for that

Arteta is likeable for sure – in terms of a connection with the fans he is light years ahead of Emery.
But winning games and trophies does not come from being able to say what people want to hear it comes from tactics, managing players and a dash of luck.
As long as he can back up talk with wins then its fine – if not, he won’t last long…
COYG….

Whilst agree that he needs to back up his talk with wins I think we should also accept the fact that he doesn’t have the quality of players to challenge for the league title and that he needs to be backed in the transfer market over the next 2-3 transfer windows.

Depends what your expectations are? 2 years ago the narrative around Klopp was he couldn’t organise a defence, he was defensively weak, Liverpool couldn’t hold on to leads … blah blah blah 2-3 years ago the narrative around Sterling was he wasn’t a natural goal scorer, he was too wasteful in front of goal, and was never going to be a really top forward….. After Pep’s first season at City, inheriting the most expensively assembled squad in history, And then spending £200mill and finishing 3rd, the narrative was you couldn’t win the PL playing Pep football… Things take time, there’s… Read more »

Other than Board comments, Mike has no pressures for this season in the league and he can lose some players and get others in to suit his plans. We may need some workhorses in the Parlour style (Mooy from Brighton?) alongside players who like to defend midfield in the Gilberto style. His younger players will need some beefing up to recognise differences from youth levels His senior players need to show good examples to those coming in and The Arsenal Way. We have several years of complacency to dispose of and that itself will take several years. That first trophy… Read more »

How can that not be a foul on Torreira?

It seems only Tottenham Hotsvar and LiVARpool get the benefits of VAR (that Norwich game was a joke).

I’m starting to think there’s something afoot with VAR.