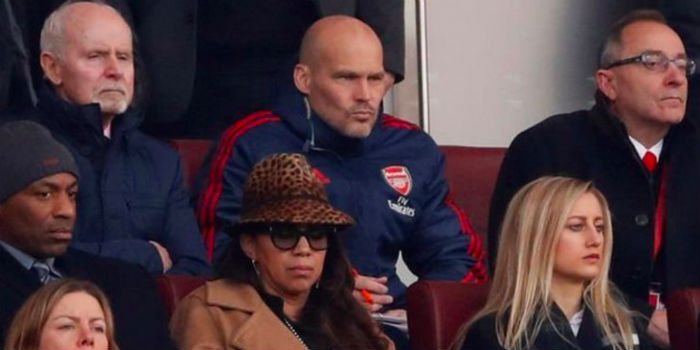 Mikel Arteta says Freddie Ljungberg watched Arsenal’s 2-1 defeat to Chelsea from the stands because he wants the Swede to communicate a different perspective to the team in the dugout.

It was confirmed earlier this week that the 42-year-old would be staying on as an assistant coach under the Spaniard but it looks as though his role on matchdays has been tweaked.

Ljungberg, who was the interim head coach for 23 days, was an ever-present on the bench when Unai Emery was in charge but appears to have ceded his seat to allow new assistants Steve Round and Albert Stuivenberg to be closer to the action.

Asked about Freddie watching from the Directors’ Box, Arteta said: “I want him to have a different view from us, and be communicating with the bench all the time.

“It’s important that he sees things from a different angle at the moment.”

We’ll be curious to see if this is an ongoing thing or if Freddie will be back on the bench in the future.

Not really. Freddie will have a better view of the team’s shape from there, as well as other technical aspects

Nothing new here. Boro primorac used to do this under Wenger.

Yeah.. but that lady in front is beautiful.. definitely one of the positives from yesterday’s game..

School holidays and nothing better to do hey

I have a feeling this is temporary. Considering the players went to Freddie instead of Emery to have ideas explained I imagine Arteta wants them to see HIM as the main focal point in this early point of his tenure. Further, Freddie is a person the players trust and as such they should also see that everyone – players & staff – have to learn and adapt to a new attitude. He’s been on the bench as the team grew complacent and lazy, and while I’m not saying Freddie represents those characteristics, his presence could potentially be a reminder of… Read more »

This is an absolutely magnificent , ingenious and most probably spot on analysis. Well done mate.

That’s some dark psychology right there

I don’t see the big deal about this, other team sports (Rugby / NFL) have coaches in the stands. It should actually be more formalised with the analytics team working in tandem with Freddie in an exec box.

They use this approach in American football.

You mean American handball? Where they run with the ball in their hand and perhaps throw it sometimes?

Is there any point to slagging American Football off?
Yes, I’m British and prefer ‘our’ game but whatever they choose to call it, it’s a highly technical and skilful. Just maybe we can learn something from different approaches?

Hey! As an American, I’m offended (as an Amaerican would be)!

Good move! You don’t win anything in Football Manager by sticking to the pitch side camera!

I like it. They use it a lot in American sports. This is the kind of progressive thinking that we need at the club.

A P
Reply to  Newxieland

I prefer the top down view. Maybe Freddie will sit in a hot air balloon next.

EuripidesMac
Reply to  A P

This!
Perhaps Kroenke can use his American “Hand-Egg” Team Ownership charms and get the Goodyear blimp to Ashburton Grove every week for Freddie to fly…”fly high”.
The blimp is the “latest, and the greatest” when it comes to hot air balloons. Though, I don’t think that any hot air is harmed in the flying of it. Hmph…

Only if the camera is VAR!!

I think we got more pressing issues as to where Mr L sits….like stop the players from eating chicken nuggets after every training session 😉

Seriously, they should look into the player’s eating habits/food contents. It should be part of their fitness regime/protocols.

I think its a great idea. Probably good to place a spy behind the opposition bench as well to text any changes they are intent in making ahead of time. Lampard went to a 4 at the back and manage to occupy our wide players (FULLBACKS) better. We dropped our output coming out from the flanks (which we were doing well first half) and started to get disconnected. Again as mention Arteta is in a learning phase himself in terms of actual practical coaching. he now has to work on the other side of management which is to enforce discipline… Read more »

Let’s just take time out to remember it’s taken Klopp 5 seasons to get to where Liverpool are now .

Whatever the reason, I want this team turned around asap.
I want to start looking forward again to Arsenal games.

I am looking forward to them already. It’s a shame about the injuries piling up in defence

Actually, I’m already super excited and looking forward to Arsenal matches because it has become enjoyable to watch again. The results will follow if the players remain focused and committed to the new Boss system and to club in general.

Leopard lady’s f*ckin magic
She wears a leopard hat
And when she saw the leopard
She said I’m shooting that
She didn’t shoot a rhino
Or lion cause they’re shite
She shot the fu**in leopard
cause it was in her sight
Only one leopard lady, one leopard lady,
Going along, singing a song, walking in safari wonderland!

George Graham would do this at times for half the game, then watch the rest from the bench. It’s clever, allows the person in the stands to get a better view of team shape than can be got from the bench.

Arseblog spot-on on the observation and comments. This is not American football and people should not look for such excuses or alien practice to justify or rubbish legitimate concerns for the health of the team.

Could have beaten everton to make arteta jobs easier, but nah, got to play the academy players to make a statement instead of getting actual 3-point.

Totally agree!! Hence the first substitution goes to….guess who? Ozil. And who replace him? No need to guess….one of his academy players. Honestly…did Willock did anything better when he came in. Almost forgettable actually. But its good Özil left the field before we shipped in TWO!! Coz if not, I bet you somehow he will be blamed for them

I was hoping FL will stay away from the team on match days. But I guess he wasnt far enough!!

Well it’s not as if the senior players he benched had done a lot to deserve being on the pitch.

Jeez Arteta!! I honestly want you to do well and I totally support you.

But we have to start winning games now. You can’t make it 3 defeats out of 3. Grind out results no matter how bad the football is. We need that 3 points for confidence now.

Hopefully better luck at United. Honestly, Freddie can watch the game from his couch if he likes, it’ll mean nothing if we keep getting sliced open when in desperate search for a goal.

We drew the last one

But we do need to start winning games now. That’s a given!

Take a break…book yourself a holiday!
It’s such a stupid thing to say that we need to win games because that’s a given…given!

The loss to Chelsea was painful. But we gave our best and played with an identity. I hope we beat United, but as long as we play the way we did yesterday. I’m confident that the pain is just for a while.

Football is an Arteta
Reply to  Chemmer

Arteta said the same thing smartass – we need a win for confidence. Everyone knows that!

This is nothing new. Boro Primorac used to sit upstairs when Arsene was the manager.

Makes a lot of sense. I have long wondered how coaches can see problems with depth, distribution, player placement etc from literally the worst level in the ground. It’s 2D at pitch level!

Looks like Freddie is not going to stick around next season. He is the biggest loser out of all this mess the club let happen with emery.

Nice! Hopefully Mertesacker is watching via the drone cam to piece it all together.