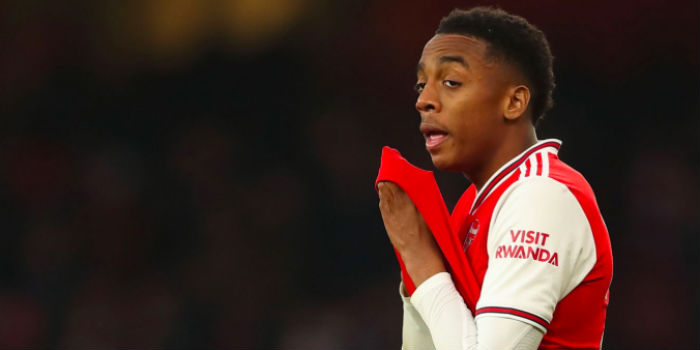 Joe Willock says the Arsenal squad all believe in Mikel Arteta’s methods and that the Spaniard’s influence was clear for all to see before the Gunners collapsed to a 2-1 home defeat to Chelsea.

Pierre-Emerick Aubameyang’s header on 13 minutes was a just reward for a promising first half but as legs tired, the visitors took a stranglehold on proceedings.

With seven minutes remaining Jorginho, who should have been sent off for a second yellow, tapped home from close range after Bernd Leno had missed a cross and then Tammy Abraham finished a sweeping counter to inflict a fourth successive home defeat in all competitions.

After the game, Willock, who had a gilt-edged chance to double our lead on 78 minutes, urged his teammates to stay positive.

“We tried to give a lot of energy and tried to help each other out but unfortunately we lost,” he told Arsenal.com.

“We just need to keep positive, we all believe in each other and we know that we’re halfway through the season and we need to push on. We’re looking forward to the next game and hopefully, we can show the energy for a full 90 minutes.”

On the impact of the new boss, he added: “He’s installed energy, he’s installed being there for each other and different tactics.

“I thought we did it in the first half and the first 15 minutes of the second half but we pushed back and they got on top of us so it’s really disappointing.

“We all believe in him, we all listen and we all try to put the tactics he does in training on to the pitch.

“It’s evident we tried to do it in the first half, but it’s a long journey, we’ve only had a week with him and we’re all looking forward to working with him.”

Arteta himself was similarly disappointed and said his players have to take responsibility for the errors made. The Spaniard has a couple more training sessions to get his ideas across before we host Manchester United on New Year’s Day.

Arsene was highly principled, and went down with his philosophy, he refused to adapt, became scattered and indecisive, and left the club in a mess after years of mismanagement. Emery was a ruthless pragmatist, lost the dressing room and fans, but I think overall he overachieved in the league last season, and was setup to fail this season, it was disappointing how we finished, but I think being in 3rd with a few games to go, was a false position. Arteta seems determined to install a style of play, I’m not convinced we have the type of high energy footballers,… Read more »

Ah, the cynics the contribute nothing to conversations and throw slurs and scuttle away! So where is he wrong? Wenger’s Arsenal fell apart because he didn’t adapt and was to set in his ways with his tactics and laissez-faire player management style (when we need some more tough love with so many soft characters in our squad). So point 1 he is not wrong (IMO). Emery overachieved and still came up short, the writing was on the wall – we were declining in our control of games and scrapping results. This season it fell apart and Emery was out of… Read more »

Cheers, finally somebody who understands me ?

We’ve been struggling to control games for a while, it’s the reason I don’t want Xhaka to leave unless we get an adequate replacement, because replacing Xhaka with a more mobile and dynamic destroyer, won’t help us get hold of games, and as much as this team lacks dynamism, our best performances this decade have come with Cazorla dictating play from deep. Arteta likes to tuck his full backs in, that could maybe help us control games a bit better. I like Torreira + Guendouzi, but at 20 + 23 they lack experience and tactical nous, and other than Luiz… Read more »

Xhaka… Yeah pass. We haven’t controlled games even with him. Doesn’t suit the team or the league. In the first 60 mins against Chelsea the torreira-douzi combo was dominating… They recover, give us drive through the middle and mobility to compete and we can press a a team when needed. All lacking under xhaka. Might take a little time, but finally playing torreira at DM (who would have thought eh!?) is paying dividends. Don’t need to completely control games, but we need the ability to and also attack at different speeds, not just locked into one dimension.

so true. the depth and quality of this squad is the problem, but tbf, it has been the problem for two previous coaches as well.. If only fans can keep quiet for longer, but i give arteta five games altogether with some results to show before the fans start venting out on him as usual

Like someone said the problem is beyond 5 games, he needs 5 transfer windows,to be able to bring in players who can play the way he wants, will be board allow him is the question

AW didn’t leave the club in a mess lol this club could have easily transitioned into a new era if they had a plan to begin with. Which in hindsight Even watching ManU fail They didn’t have. Good start was having Sven in control of the transfers. They was cancelled out immediately within a year after Ivan left after I guess a power struggle with Raul. Now I understand what AW was ranting about when Raul was being brought in about what is Raul role within arsenal when Sven was already here. Like you mentioned emery overachieved? Many complained about… Read more »

Dunno Joe, you kinda play like you don’t have belief in yourself. Two games in a row had a chance to put the game to bed for Arsenal and you’ve fluffed your lines.

There’s a strong tendency to bring everything down to the mental side of the game. Technique plays a part. Fitness plays a part. In the case of two incidents, luck also plays a big part.

Give him a break. He’s a huge talent and could be a massive asset to Arsenal for years to come.

Can someone help- I lost stream for Devi d half yesterday . But reading on this site, why did Arteta not sub off injured Saka’ and concussed victim mustafi – e.g. brought on manvroppanos’& willock on at left back ( or then switch given withA.m.n. ) instead he subbed off ozil? Better tired ozil then injured players. Who where directly involved in Chelsea second goal ?!

Apart from the attempt at goal, what other major contribution did Willock make as a fresh leg? Arteta is just starting to know & understand each player’s weaknesses and strengths, and how best to utilize each player to the overall benefit of the team. Willock is not a donkey strength, he tires easily and unless he builds on his endurance and stamina (just like Lacs needs to work on his fitness), he will only be used as a cameo in this high energy/intensity system that Arteta wants to implement now.

Probably because they didn’t think the leg injury was that serious or he could get through and finish the game.

I agree a tired Ozil is better than a player with some injury to the leg but you just had to make a decision. It’s one of those things where a new manager learns?

Good, prove it by improving on your work rate and giving Gendouzi something to worry about and Arteta a decision to make. Improve yourself.

Spot on.
Thank you.

Give Arteta time. The big test is what will happen in the upcoming window. We need a proper midfielder who can sit with Torreira and feed Ozil and protect the back 4. We also need at least one proper center back, break the bank for him, and a left back on loan. I think Maitland-Niles is doing great under Arteta and Bellerin is back in training. Let’s fix a few of those problems and push for the season. Top 4 might not be in our reach now but who knows. We can still go after the FA Cup, League Cup… Read more »

joe is one of very few guys in the current squad who fights for the badge.

I don’t doubt that, but he’s currently off form. Something needs to change to improve on his fitness and then his form. It’s not about blindly rating a player just because he’s English. It gives them a false sense of security and affects their productivity. Positive criticism where necessary can be harnessed positively by those concerned (if willing).

I know it’s counterintuitive, but he would have been much better if he were started with a coherent game plan for himself, rather than cleaning after Ozil’s spectacular but unproductive 60-minute shows

Actually, yesterday’s contribution from Ozil was the best that I’ve seen from him in a very long time. Arteta that played him ahead of Willock wasn’t mistaken. He knew exactly what he sees in training (probably why he plays Nelson ahead of Pepe). Willock only came on when Ozil began to tire out after the hour. Let’s remove sentiments and call a spade what it is. On current form, Arteta got 100% right in playing Ozil ahead of Willocks. Willocks is a decent player, but like most other English players, the media need to over hyping their supposed qualities and… Read more »

ozil’s performance might have been nice to watch but the result was exactly nil. I remember ozil’s performance not so long ago, last season, that was impressive and had some tangible results — leicester 3-1, 80 minutes on the pitch, one goal, one assist. or napoli, about 70 minutes on the pitch, 0 stats but that starting pass to laca was just superb, and we won 2-0, which is very impoortant. that’s my benchmark for him if you will. other than that, total loss. yes, a couple of flicks here and back passes there, but result is negative. not enough… Read more »

One of the points that I was trying to make. He needs to be positively criticised (when necessary) and adequately encouraged/praised when doing something right. It will help all of them in the long run.