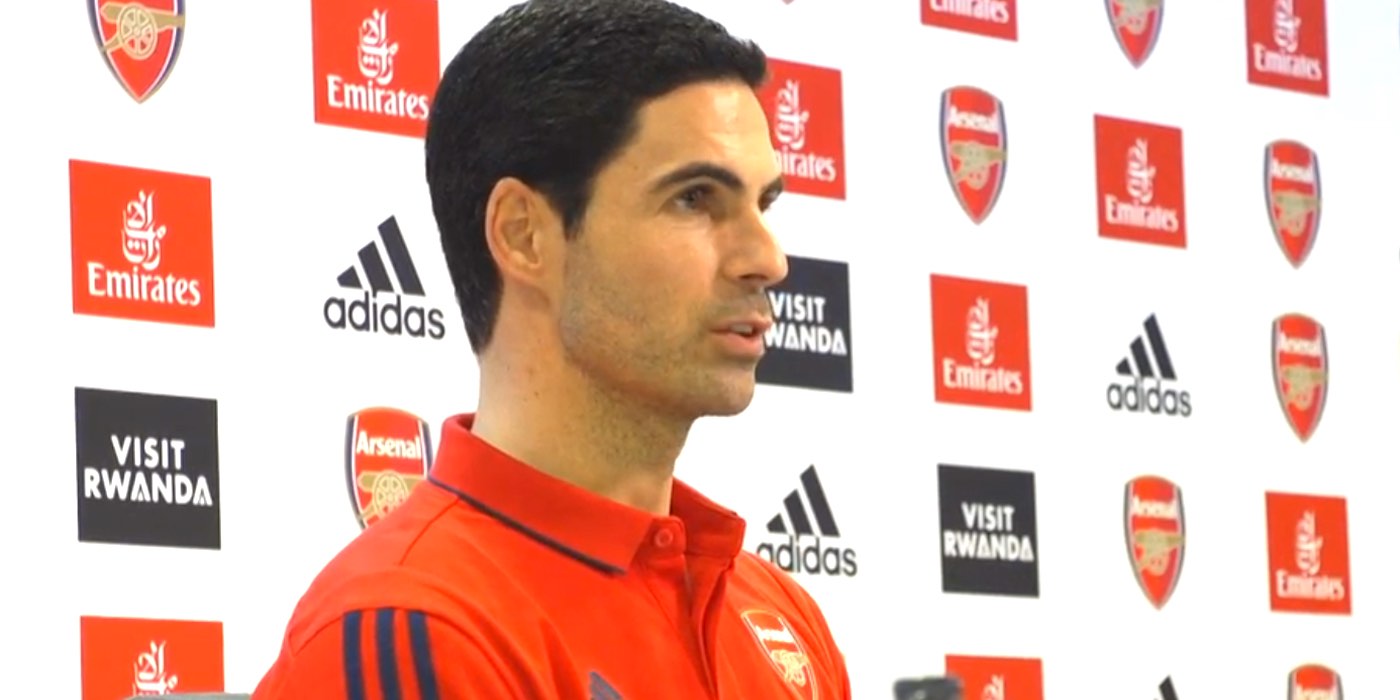 According to a report from ESPN, Mikel Arteta has made it clear to the Arsenal players that he’ll be watching them closely from the stands at Goodison Park today.

The Spaniard’s appointment as head coach came too late for him to take charge of today’s clash against one of his former clubs, so Freddie Ljungberg will be guiding the team from the sidelines.

However, Arteta will be in the stands, and reportedly told the players he’ll paying attention to how they perform, with and without the ball.

It’s said he told them, “I will be in the stands tomorrow at Everton. I want you to know that I will be watching your attitude, your efforts, your body language.

The 37 year laid bare his footballing philosophy after taking over at a club he captained, and in his press conference yesterday he insisted that anyone who wasn’t on board with his methods would be dispensed with.

“I don’t want them hiding, I want people to take responsibility for their jobs and I want people who deliver passion and energy in the football club.

“Anyone who doesn’t buy into this, or that has a negative effect or whatever, is not good enough for this environment or this culture.

“The first thing is a little bit to change the energy. The direction’s going to be very clear and it’s not going to be negotiable.

Impressive Arteta gives us something to believe in again

It will spark Ozil to give a big smile when substituted

Hoping for a front 4 of Aubameyang, Martinelli, Pepe and Smith-Rowe today, with Saka and Niles as full backs.

Defensively it’ll leave us open, but attack is probably our best form of defence at this point, and Freddie’s got a free hit.

I am not asking for certain players to be in the team. I am looking for Arteta to put what he wants on the pitch and let him conduct. See how it pans out, when the fans want someone to be in the team but it is not helping over all the performance then I put team first. I love Lacazette but he was not able to help the team in the last few games. So dispense him but let the coach try to implement his style. Emery was given enough time (a year and quarter) but he was unable… Read more »

Would you just allow this guy do his work?

Loving this … on their heads be it if they do not perform, they have been warned ?

As it should be. Arsenal is a top club.

He will watch Xhaka let a player with the ball pass him by, Xhaka diving out of the way of a shot, Xhaka cussing at arsenal fans, possibly Xhaka getting sent off!!! What I am getting at is I think Xhaka wants out, so personally I wouldn’t play him!!! I do look forward to players like Xhaka getting dealt with firmly – then shown the door!!!

Yeah he will see only that and not at all Auba and Pepe absolutely lose interest when we lose the ball because that isn’t a problem at all. The problem is Xhaka. You people have started to become boring. Let Arteta work. If he doesn’t play Xhaka, fine. If he plays him, fine. Just stop the hating will you…

I didn’t say other players are not pulling their weight, but people are entitled to their opinion and mine is that Xhaka will not suit the style of play Arteta is looking at imposing and also has a poor attitude

Oh, Mikel… getting me excited to watch us again. Hope he’s given the time he needs to turn us around. I genuinely believe he has it in him.

About damn time. I tot aft Unai gone, the players would fight for freddie, it didnt happen. No more hiding, no more prima donnas. Fight for the badge.

I thought the same. There is no doubt that some of our players are hugely talented and I thought that would immediately surface again, after their supposed hate figure Emery was gone. Well, it did not. Maybe cause Freddie was just an interim. But it is clear now: This is the new man for years to come. Whatever happens, he will stay. Also after summer. If you stay too as a player, will be decided by this man. So now either you are on board with him, or he will deal with you in summer and maybe even before. All… Read more »

Wow. Now even I feel watched by Mikel…

Loving the sound of Arteta already. So positive and ready to inject some belief back in the players and fans.

Yep, accountability – from day one. Some of these brats might need reminding and educating what it is to play for the canon, get rid who ever is not commited.

Some players will flourish. And for some it’s start of the end. But fuck it. This is what arsenal needs. A ruthless manager with a clear vision.

I so so hope this works out. And the board backs him in the transfer market

Fucking love this. Shape up or ship out!

Well, he says all the right things. Hopefully he will come through, I’m fed up with talk, I want to see the lot running their arse of for 90 minutes!

Fantastic. It’ll be very interesting to see how he reacts especially when one of the top players falls afoul of this.

I’ve been on the fence about Arteta taking over, but after watching his interview last night, I’m as excited as I have been for years. That was beautiful! I’m starting to believe again.

We have one of the best academies in the England. You can be replaced. Work, or lose job. Spot on from Mikel. Players, over to you.

I really hope the board get behind him. The players need a mentality change and the club has needed for the past 10 years or so

Very, very excited. I wasn’t sure about it at first but after seeing his interview and press conference I’m very impressed with how he comes across and how he isn’t going to carry anyone in this team no matter who they are. He’s going to be all over them like a rash. Let’s give him our full support and give him the time he needs. This won’t be an over night change but with our support and 2-3 good windows and pre seasons I think Mikel will return us to where we should rightly be. LETS GET BEHIND HIM!!!!!!

More than anything he is filling me with optimism and hope. He made me forget that we are currently 9th.

Unbelievable that a manager even has to say that.

Need to get strict yes, players lacking passion please get them off the field. No point these players having abundance of talent and not showing it.

The ball is in the player’s court then.

Oof! That’s discipline. Will be interesting how the players react to this.
Calling them out straight away is a risk but I hope it works out. A lot of them need a good kick up the arse.

Let’s really back the guy! And by that I mean let’s not start flip flopping the minute there’s a bad result. We need to understand that no manager is going to magically turn this around. It took pep, the best manager in the world, 1 year to turn man city into the force they are and that too when they were miles better than we are now. Mikel will need a lot of our patience and support. Let’s back him!