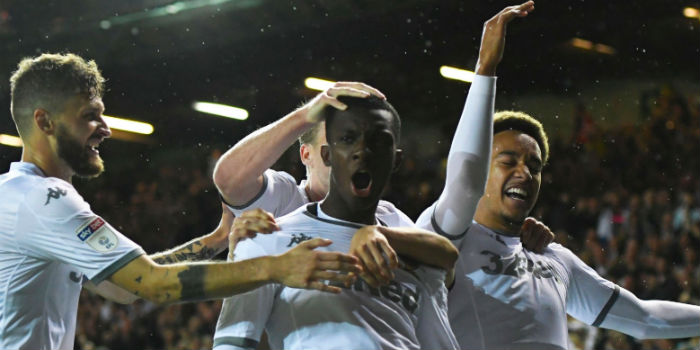 Freddie Ljungberg says he’s disappointed that Eddie Nketiah hasn’t had more game time during his loan spell at Leeds United and revealed he’s been in regular contact with the England under-21 international this season.

An Elland Road envoy persuaded the Gunners hierarchy to part with their Academy Graduate in the summer with the promise of giving him the opportunity to continue his development.

While Nketiah has scored goals for the Whites, six in 13 games, he’s only played 444 minutes; the equivalent of five full games.

There have been some suggestions that Arsenal could recall the player in January with a view to loaning him to another club in the second half of the season.

“I need to be careful but I think Eddie is a great player,” the Swede told his pre-Brighton press conference.

“If he goes on loan we want him to play football and get minutes otherwise they (players out on loan) can maybe be here. We want them to be on loan to get minutes.

“I feel a bit sorry for him because he is a great player and the future of this club. When he has had his chance he scores goals and that’s what he is about.”

“I’ve been calling him (throughout the season) and he texted me as well two days ago.

“Like I said I go on a game to game basis but you asked for my opinion and that’s my opinion.”

An abdominal injury kept Nketiah sidelined for four games, but made a comeback five days ago in the 4-0 win over Middlesbrough. He’s since followed that up with game time in the reserves.

“We are happy that Eddie has come back,” said Bielsa. “[On Friday] he has played 45 minutes and today he has more minutes and step by step he will get his fitness level back.”

I’ve been keeping tabs on him and though even the Leeds fans want him to play, it’s clear Biesla has no plans to remove Bamford as his first choice due to the type of play he wants to bring. On one hand, it’s good as Eddie has adapted a more high-energy approach to his play (something he was doing in preseason for us), but no matter what, he’s not moving Bamford in Biesla’s eyes, even though Bamford hardly scores (so much so in their last game, the opposing players were chanting “give it to Bamford”). Just bring him back and… Read more »

Their central striker is more of a physical target man right? Maybe he can do a better job wide for them?

Bristol City had been keen on Eddie for a long time, had made the approach and intended to use him as they had done with Tammy Abraham for Chelsea. I was annoyed when he went to Leeds, who already have history of not playing loanees. Marcelo Bielsa is a cautionary tale of how not to be blinded by a “name”.

A Gorilla
Reply to  Faisal Narrage

Love the idea of players chanting. That would definitely put you off!

catbiscuits
Reply to  A Gorilla

especially if it was a complex Gregorian chant

ala keown vs van nistleroy

Not to be negative, but Bamford plays a very “physical” type game. Don’t see Eddie really having that style, nor wanting him to learn it. Probably was not the best team to loan him to, but then again, they are in the thick of the promotion race again.

Pull him out on January 1st, play him at home in the FA cup against Leeds, so he can bag a hatrick, and then send him on loan somewhere where they’ll play him.

Eddie was about to make his debut when he picked up an injury in training.
This coincided with Bamford returning to scoring goals!!
Mr Bielsa won’t play two strikers together from the kick off.
If he returns to the Gunners he will have less chance of starting games.
i suspect he will play a bigger part now Tyler Roberts is injured again?

So much for the delegates from various clubs coming to us to pitch for Eddie’s services.

Maybe one of the questions in future pitch sessions should be “so… do you actually want this player?”

These loans are tricky. The players themselves have to be hungry enough to try and impress. Nketiah if he isn’t being used, should be recalled maybe. BUT who we need to put out on strong loan is Mavropanos. We have enough Cbacks in numbers, just lack quality. Mavropanos is not that young anymore and can benefit from accelerated development if we can find the right club for him to feature next half of season. Ditto Smith-Rowe who is seeing less opportunities at the moment. Nelson is another one to be concern with. We need to be playing him or he… Read more »