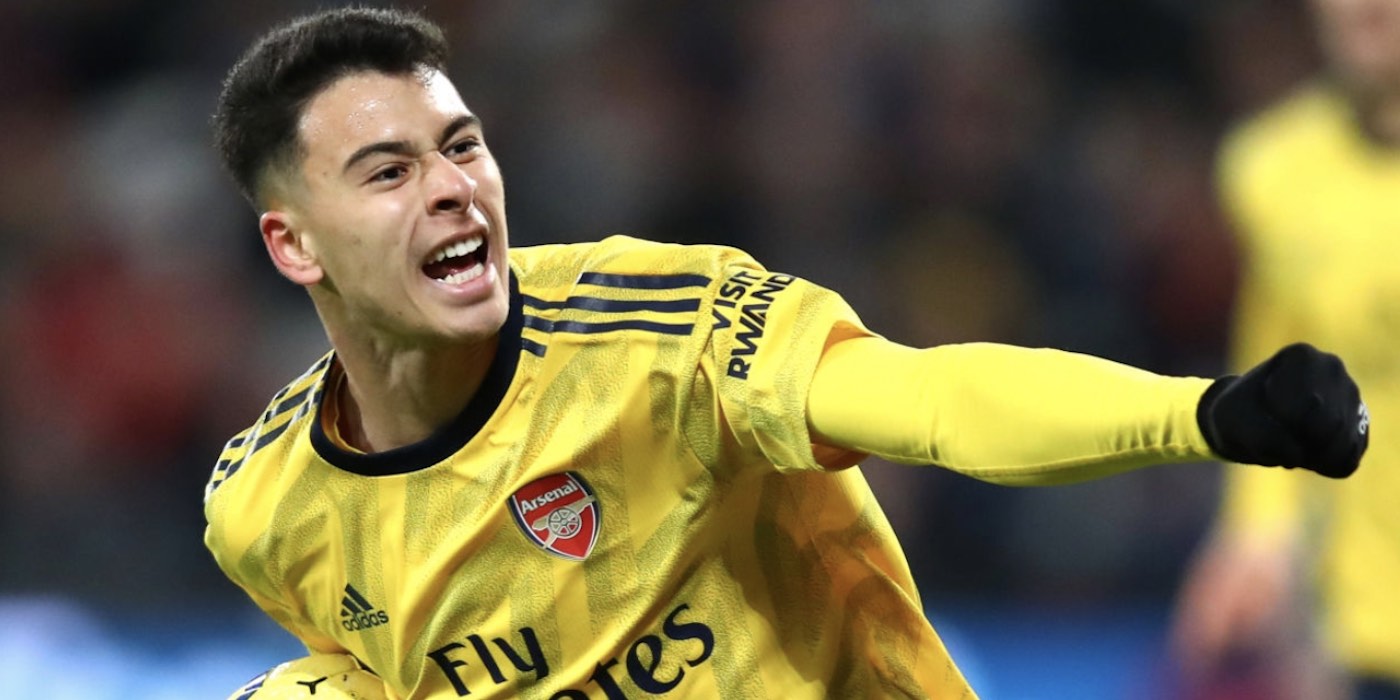 It had been another 15 minutes of dreary stuff from Arsenal at the London Stadium, after a dreary first 45.

1-0 down and seemingly bereft of ideas, the Gunners were struggling. Then Lucas Torreira found Sead Kolasinac down the left, he put in one of those low crosses he likes so much, and there was Gabriel Martinelli to slot the ball home to make it 1-1.

“Gabi is a fantastic player,” he said.

“He’s still very young but he has that energy about him and he goes and he goes. He has no fear and he just keeps on going.

“So it’s a pleasure to see him there on that pitch, and for him to get the success that he did today, it gives you a smile to your face.”

There’s no question the young man has an eye for goal, he’d scored seven times previously this season in the Europa League and Carabao Cup, so to get off the mark in the Premier League is another step forward.

It was just reward for a brave selection by the Swede, and in a season which has been short on bright spots, the young Brazilian is definitely one of them.

Martinelli: When Mikel needs me, I’ll always be there

He’s the very existence of hope.

“Help us Gabi Martinelli, you’re our only hope”

Whether fans like RVP or not, Gab reminds me of his debut with Arsenal.

I think he looks great, but next season we’ll see what he’s really worth. A lot of energy, once studied then diverted by mid-table defenders should show what he can or can’t do.

He has the quickness, pace, agility, precision, and understanding of angles to beat any defender in the world. Will he continue to demonstrate those skills on a consistent basis? I think that’s a more appropriate thing to question.

8 goals in 7 starts ain’t bad is it
Even klopp saying he is a once in a lifetime talent is huge praise. Big ups to the scouting department on this one.

He’s a driven individual. That looks obvious to me. No matter how bad we’ve been or can be, he will make it. Throughout all the recent madness, he’s kept quiet, kept his head down and focused on his game. I’m not sure if we’ve put a buyout clause on his contract, but whatever it is, increase it. I’ve been watching Arsenal since the late 70s and this kid is right up there with some of the best young talents I’ve seen at the club. I’d be trying to offer him a contract extension asap. He reminds me of the impact… Read more »

With Ozil behind in the middle, Gendouzi to play a role box-to-box like Ramsey did, and Martinelli on the right, and either Lacazette/Aubameyang in the middle, or maybe Laca/Auba on the right, we’re starting to look a lot like an old Arsenal side under Wenger, but with newer, not so fluid personnel, making it feel a lot like 2012-13, where we had just signed Cazorla, Giroud, Podolski, and reorganized our attack with a Mertesacker/Koscielny defense by the end of the season. Hopefully we get a strong centerhalf pair to settle our team’s spine down, and our midfield should be able… Read more »

When we signed Pepe, I think we were all looking forward to seeing him starting with Ozil, Auba and, in spite of his youth, Martinelli. It’s taken four and a half painful months and one sacked useless shrinking violet to make it happen, but at last, there may be some light at the end of a fucking awful tunnel. Here’s hoping we’ve turned a corner.

I agree. It’s about time we started a game with our strongest formation and with 11 players playing in their strongest position. Including the 2 wingers / wide forwards.

I think Freddie was maybe not wanting to rock the apple cart too much when he initially took charge, but I’m glad to see him setting up the way we did last night, and hope that that’s the last of putting square pegs in round holes to accomodate certain players.

Martinelli is a star in the making. He is the future of Arsenal, if we lose him we lose our future.

Our scouting and recruitment has been really bad for a very long time.

Martinelli looks like our best find since we signed Anelka 22 years ago, hopefully this relationship turns out to be longer than 2 years.

Don’t forget Cesc.. he carried our mediocrity for a while

Bellerin too. Nicked from under Barca’s noses.

Bellerin is wildly overrated by some arsenal fans

A star is born.

For such a skilful player his workrate,drive and endeavour makes me proud.

He’s going to be massive.

Also his defensive awareness really impressed me. I love this boy already!

The way he chases down everything and refuses to give up. Dare I say almost like Luis Suarez.

I’ll see myself out

Without the tombstone fangs.

I would heed my comparison to Carlos Tevez instead of the other two for their respective history.

This kid Martinelli is going to be something and for that I fear we are going to lose either of Lacazette or Auba come the summer. (Most likely Laca considering Auba’s status as our current captain)

Most probably both, considering our lack of… well, everything. But if only one will be leaving, then I guess it will be rather Auba then Laca, as he has one year shortec contacr with us.

Tevez is a good shout too, so is Augero. Bitey is one of the most intelligent and classy finishers I’ve ever seen.. Martinelli is not even 19 yet, plenty of time to develop and carve out his own identity. With his attitude and potential, kids will be comparing up and coming players with him..

Martinelli is a bit more direct that Alexis imo..

He reminds me more of two ex-Arsenal players – firstly RVP for his ability to work some space in the box and score skillfully. Secondly Alexis for being a menace for the defenders.

I was thinking the same, Martinelli reminds me of Luis Suarez, but with blistering pace. If we can get £50-£60 mill for Lacazette at 28, with 2 years left on his deal? Then we’re in a good position to allow it to happen. Might also be easier to convince Aubameyang to stay, if we start playing him regularly down the middle. We were very poor again last night, against a very poor and one paced team. We really struggle to get the ball into the final third, and our link between defence and midfield, and midfield and attack, is really… Read more »

The kid is a sensation. I’m always fearful about heaping too much praise on young prospects, but this lad’s attitude impresses me as much as his footballing ability. You wouldn’t blame any 18-year-old going absolutely barmy having scored an equaliser on his league debut, yet his first thought was to grab the ball out of the net and get on with it.

He’s more than earned a start against City, as far as I’m concerned.

Freddie has to start the same forward line up as last night. Keep the momentum going.

This guy has every attribute you would want a young forward to have.

I’m going to put my usual anxiety of thinking ‘a wealthier club will buy him’ on the back-burner for this guy and just enjoy watching him while he’s here.

His unsuccessful trial at Man United makes the story even more sweet.

I honestly feel that trial situation has helped put arsenal into his heart. Which is great!

The best moment so far, of this woeful season.
Once he put that in, the rest of the team woke up. He was the only one brave enough to score. Leading from the front, with great attitude and great skill.

Exactly, Onenil. He made the goal with such conviction and drive. If i may say so – if we had Iwobi in that situation he would just make a meek shot in a GK’s hands.

He’s a perfect example of a modern footballer. His zeal, determination and courage has no comparison in this current Arsenal set of players. His diehard attitude will rubb off positively on other team mates and that’s the spirit needed in this team pending the summer window.

Love that kid, he has so much potential and is our future

Yes brave to drop Laca and Luiz. When you look at their form maybe not that brave. But it’s something that Emery refused to do and the FEC failed to consider when squad building for Emery.

Almost feels as if Freddie has a plan.

Emery played it safe and relied on experience, although his youthful teams played better (in the cups).

I think the best part of Freddie is although he said experienced players have to take responsibility, he was bold enough to play the youngsters in all the 3 matches he has overseen despite his own precarious position and tricky to get the team out of the rut.

I’m also pleased that Chambers had a game in CB finally for us.

and what a game Chambers had.

Impressive in every game he has played in this season. Should tie him down on a long term contract before the vultures start to circle.

He is simply sensational. Even Klopp was saying he was an unbelievable find after our cup game at Anfield. Alongside the likes of Aubameyang and Leno, one of the few players to have had their reputations enhanced so far this season.

Loved the way he quickly recovered the ball from the net.

I think I figured out why that is. Let me know if it still happens

Cud Freddie be the man?
His post match interview…….. so copped on.

He’s surprisingly good in the air too. He just seems to have that natural timing that top players have.

Martinelli is the real deal, extend his contract. He plays the Arsenal way, gritty confident football. Loved how he didn’t celebrate his goal but just grabbed the ball out of the net to go score another goal. Wasn’t satisfied with a draw, he wants to win.

Very pleased with the young man. I still don’t think Edu is a useful addition other than politcal shield for Sanlehi but at very least he came bearing gift of Martinelli. Real step up for him and he has so far shone this season. His hard work is examplary and one reason why Freddy preferred him out left to Auba. Press pundits at BBC as usual completely wrong makinmg it out as if he was a swap for Laca. they don’t even play the same position. Auba was preferred up top bc we were playing away and likely on the… Read more »

https://www.bbc.com/sport/football/50556045 Serge Gnabry. How we sent him inexplicably off to Tony Pubis the idjit. And how we screwed up. Instead of either forcing Ox to sign or promote Gnabry, we let him go. He went to tutelage under Robben and Riberry. Insightful to note what they instructed him. Always work out of your comfort zone. He has been prolific going forward but since then has improved on defensive work This is something Pepe and the younger hopefuls in Martinelli, Nelson and Saka need to take note of. We do not have that world class mentality at the moment. These players… Read more »