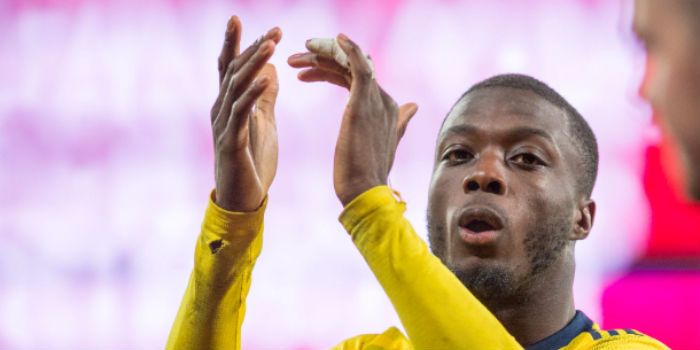 Freddie Ljungberg was quick to praise Nicolas Pepe’s contribution after the Ivorian scored his first goal from open play for Arsenal to help the Gunners end their two-month winless run.

Handed a start on the right flank, the 24-year-old produced his best display in a Gunners shirt, grabbing a fine goal before assisting Pierre-Emerick Aubameyang for his side’s third.

Having scored a brace as a substitute against Vitoria in the Europa League at the tail-end of October, a cameo that was supposed to kick-start his career in north London but proved to be a false dawn, the challenge for the player is to build on this performance.

“People always ask me about Nico and I try to explain,” said Ljungberg after the game.

“He comes from the French league, he comes to the Premier League – in my opinion the best league in the world – and it’s a lot faster and a lot harder. He needs to adapt.

“People put pressure on him but that’s not so easy, and I thought what he did today was he worked really hard offensively and defensively and showed his quality.

“I’m so pleased for him because at the same time he was a big, big buy for the club and then comes pressure with that as well. He will fall asleep with a smile tonight!”

Pepe looked shattered when he was finally taken off in the closing stages. With one eye on Sunday’s game against Manchester City, you’d imagine the winger will be rested on Thursday when we travel to Belgium for our final Europa League match with Standard Liege.

He can skin anyone, anytime. I love that.

There was a great move where he span 360 degrees, leaving three players in his wake. He fed AMN who’s cross wasn’t really up to the job of finding Auba. It was a chance entirely created by Pepe’s phenomenal dribbling ability.

He is just so hard to mark! Cresswell’s attempts to deal with him should have resulted in either a straight red or at least two yellows. Pepe will be huge for us.

So good at going past people and creating a yard of space, just been missing the final ball or finish. Hopefully found it now! I love Martinelli he is so cute

We need the team to create more 1v1 situations for pepe. He’s so deadly when it’s just 1 defender to beat.

Absolutely. And whenever he gets the ball 2-3 defenders are drawn his way. Gotta find a way to exploit that as well.

blogs – sorry for the unrelated comment but I just switched on your latest Podcast and I f**king died. The intro had me in fits at the office. Well done. That Pepe celebration. Hilarious.

Pepe seems like a really down to earth humble guy, which makes a nice change. Although it’s early days and he’s still adapting he’s shown glimpses of brilliance, and with the right support I reckon we could have a real star on our hands. To think we’ve struggled for productive wingers since Alexis left, now it’s one of our most exciting positions; Pepe, Martinelli, Saka and there’s still chance AMN and Nelson could shine there too.

Ya gooner
Reply to  Upamecano but downalego

Amn in defensive midfield for me – but only if he can cut out the concentration lapses and overconfidence. Playing rb will mean he knows how to cover a full back who’s out if position and he has pace and is good on the ball, not the best tackler but he can learn. Coquelin had a stint at rb and then moved to dm and did well, why not him.

Upamecano but downalego
Reply to  Ya gooner

I must admit I used to back AMN at DM but it’s been so long since we’ve played him there properly (and never regularly) I’m worried we’ve ‘untrained’ him in that role. I hope you’re right (and that he overcomes the issues you’ve aptly pointed out), as we need control there more than anywhere on the pitch, and his pace would be a real blessing when tracking back or bursting forward. Worst case scenario, we’ve got a reliable, home-grown, squad player that can fill in at DM, RB, RWB and RW, so that’s pretty decent ?

Mother
Reply to  Ya gooner

@Ya gooner So, you think AMN is suited as a DM despite the fact that you also think he lacks probably the two most important attributes a DM needs…….? Makes sense.

Dr. kNOw
Reply to  Ya gooner

@Ya gooner, AMN at DM wouldn’t work. We all know Arsène played kids at fullback or the wing to ease them into 1st team football, giving them half the field to work with, and halving the risk in the process. AMN’s passing stats are poor, and he only has half the field to work with. Putting him in the middle when he hasn’t passed this grade is highly illogical. Taking his flaws into the centre of the pitch at this stage (poor passing and mental lapses) is worse than playing the likes of Xhaka. He needs to fix up before… Read more »

But can he do it on a wet and windy Sunday afternoon in North London against the current champions?

He played quite well in his first match against Liverpool so why not Man City?

Hopefully this will do his confidence the world of good. He’s got the ability, he just needed time to adjust.
Against City, I’d make some changes though. Hopefully Bellerin will be fit, I’m not so fussed with Kolasinac, he’s a fighter and will committed. Take Xhaka out though. I’ve said it many times, he was part of a trio of hopeless transfers a few years ago, with Mustafi and Lucas Perez. Nearly a hundred million they cost and we’ll be lucky to recoup 25 million from selling them.

None of those transfers were hopeless. Mustafi was in the German World Cup winning squad and formed a good central partnership with Koscielny when he started and in fact we were undefeated in his first 17 matches. Yes he regressed alarmingly but on paper it was a good signing. Perez performed well when given a chance but somehow Wenger never trusted him. As he has been sold I can’t see your point. Xhaka was a good signing and despite the flak he gets has generally performed well and still has one of the best passing ranges of any player. He… Read more »

Disagree with that. Mustafi failed at Everton and Valencia were reportedly baffled we paid so much for him when no one else wanted him. We went for him over VVD FFS. And Wenger thought Xhaka was a box to box midfielder and also partly signed him on the basis that his captaincy and poor disciplinary record would give us some steel and leadership (LOL). To spend more on him than Chelsea spent on Premier League champion Kante was madness and people questioned it at the time as well.

A lot of transfers, not just ours fail. My point was that Xhaka, Mustafi and Perez have proven to be part of the overall decline in standards at the club. It doesn’t take rocket science to see this surely. We’re currently terrible at the back and not much better in central midfield. Passing a football is not exactly a unique trait for a midfielder, but having positional discipline and an eye for danger is Xhaka has neither and is also slow, nonathletic and reckless. No one will pay 25 million for him and I doubt we’ll sell him before his… Read more »

Pepe is raw. His style is different to Alexis, but he’s similar in the sense he’s a high risk, high reward player, who plays the percentages. We need to find ways to get him further up the pitch, and get the ball into him early, he looks a very good dribbler, good in a 1 v 1 situation, and he’s very quick. We also need to inject some intensity into his game, there’s hardly any effort to win back the ball when he loses it, and his closing down is non existent. There’s raw potential there, but unless he improves… Read more »

He had a mixed game in truth, some heavy touches and poor decision making marred his evening, but his talent shone through in the end. I think the key for him is getting the ball closer to goal, picking it up in and around the box where defenders are more scared to get touch tight against a dribbler. Get the ball to him higher up the pitch and he’ll be a real menace, and if he starts using his right foot and scoring tap-ins as well he could become unplayable.

I desperately hope that Freddie is going to really turn thing around for the club he loves- Arsenal. And his references to the players, in this case to Nico P. is like a breath of fresh air- down to earth, empathic and with a touch of humour in his expression- in fact, the complete opposite of his predecessor. No wonder the players are trying to get their act together for their coach- and I’m sure Pepe slept very well last night! And he hasn’t mentioned being ‘calm’ at all…

One thing Freddie and the boys need to work on is how to take advantage of his dribbles. Looks like teams put two players on him and at times he beats three players in a few moves. How others ( who are outnumbering the remaining defenders) position themselves should be key

Finally!! May there be many, many more goals like that

He does some good things Pepe and the goal plus assist will certainly put him in good stead. BUT he needs to build on this and sustain it. Plus his off ball work still leaves a lot to be desired so its not all a bed of roses suddenly. Many times he takes on players and over complicates things (like the breakaway late on). BUT when he loses the ball, instead of tracking it back and trying to regain it, he tends to annoyingly pump his fist on the ground or try to appeal for a foul then slowly get… Read more »

https://www.bbc.com/sport/football/50556045 Serge Gnabry. How we sent him inexplicably off to Tony Pubis the idjit. And how we screwed up. Instead of either forcing Ox to sign or promote Gnabry, we let him go. He went to tutelage under Robben and Riberry. Insightful to note what they instructed him. Always work out of your comfort zone. He has been prolific going forward but since then has improved on defensive work This is something Pepe and the younger hopefuls in Martinelli, Nelson and Saka need to take note of. We do not have that world class mentality at the moment. These players… Read more »

For the first time I totally agree with your point and I couldn’t agree more with it. Very apt.