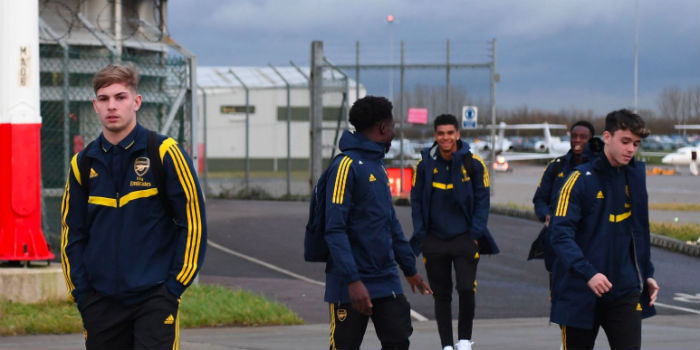 Freddie Ljungberg has selected a young squad to take on Standard Liege in tomorrow’s final game of the Europa League group stages.

Having beaten the Belgians 4-0 at the Emirates, the Gunners just need to avoid defeat by five goals to secure a place in the knockout stages. That said, a win is needed to guarantee top spot ahead of Frankfurt who play stragglers Vitoria.

In light of today’s injury update and the festive fixture pile-up, we’re turning to the Academy for a helping hand.

Emile Smith Rowe, Bukayo Saka, Joe Willock, Robbie Burton, Tyreece John-Jules, Zech Medley and James Olayinka have all jumped on the plane across the Channel. Gabriel Martinelli, scorer of his first Premier League goal on Monday, is also in the squad.

The Gunners will be without Hector Bellerin, Dani Ceballos, Rob Holding, Nicolas Pepe, Kieran Tierney (out for three months!)and Granit Xhaka due to injury. Shkodran Mustafi is suspended.

Arsenal host Manchester City at the Emirates on Sunday. It’s going to be a tall order securing a second Premier League win in a row with such a depleted squad, but we’ll start worrying about that on Friday.

Personally couldn’t care less if we finish top of this group or second. The man city game on the weekend is huge for us. They’re not looking too well at the moment and have injuries to key players in defense. They CAN be gotten at. They’re playing in an hour and have included most of their starters in the lineup and the rest are on the bench. This is a huge advantage that we HAVE to take. It doesn’t guarantee anything and city will be massive favorites on Sunday but we have to take whatever advantage we can. Despite our… Read more »

manC is going to stuff us even if we play full strength on current form.Let’s prioritize europa and avoid champions league team.

I love the optimism.

After what we have been through this season, I’m just going in with low expectation – ManC will beat us with their backup team.

It would be good if we put up a good performance.

Well, Ederson DeBryune Sterling Walker and Silva all rested and Jesus taken off at 60 minutes. They are beatable but we’re a total mess without any confidence so I would play a strong side in Liege and park the bus on sunday

An interesting take but here’s another just to consider: – Cups (EL & FA) only chances to get into Europe next season – Man C highly likely to win at weekend – Freddie must retain confidence to kick on throughout Dec/Jan etc So, rather than load the players with ‘must win’ against City and increase pressure, perhaps better to: – win EL game (to win group which seemed *very* important to Emery and whatever else we think of him he did win a few of the EL Cups and got us to a final) – play with freedom against ManC… Read more »

And your thought is quite good. A win against City might prove very important. Boosting morale at the highest. Let’s see what happens but it’s certainly interesting to see how the youngsters do in the final match of the group stage.

What about Reis Nelson and Maitland-Niles???

IMO Bloggs might have figured that those are already first team players hence no need to mention them in his “surprise” academy list. It’s public knowledge that they’ve featured in a few senior fixtures so fair play to him. (man bite dog, dog bite man news etc etc)

The Young Guns to put in Arsenal’s best performance of the season. An early goal to dampen Liege’s spirits. 5-1 to the Arsenal.

I’d like to see ESR play, assume he’s been injured recently again. Could make a difference in the PL if he stays fit and gets a run. Missing some creativity in that midfield, and some drive. He has both in bags.

Man city’s B team will beat our full strength squad

Rather big blow on Tierney. Don’t think he has been doing any “masterclass” as some prefer to imagine but a very big loss all the same to a good asset we really need.

Kolasinac himself is playing through issues so hopefully he keeps fit since he has been quite good lately.

As far as team is concern, not sure if its entirely a great idea to rely on youth against Standard Liege away with the Europa also in the balance. We may well find ourselves kicked out of europa if not careful. BUT we also have to cast a very wary eye on the league match coming up against City. If we consider we can’t get any points from that, then maybe better to invest in Europa and get things done. OTOH, we are so critically low in league at the moment that we must gun for every point even if… Read more »