THE LOWDOWN
Arsenal Women face Manchester City in the Conti Cup semi-finals at Boreham Wood on Wednesday night. These two clubs have met in the last two finals, as well as the 2014 finals. In fact, they are the only two clubs to have won the Conti Cup since its 2011 rebrand, with the Gunners winning five and City winning the trophy three times.

One of them will get another crack at the final against either Chelsea or Manchester United, who play in the other semi-final at the same time. The final will be played at Nottingham Forest’s City Ground on Saturday, 29th February. Joe Montemurro has won all three of his games against City at Meadow Park.

A stunning team goal from back to front ?

The teams meet again at City’s Academy Stadium in the WSL on Sunday in a crucial game in the title race. In effect, the teams play two cup ties in different competitions in four days. City’s defeats this season have come away to Arsenal and Chelsea in the WSL, against Atletico Madrid in the Champions League and away to Manchester United in the Conti Cup group stage.

Arsenal do not prioritise competitions under Joe Montemurro, he plays with a tight, multi-functional squad and still adopts only gentle rotation in the group phase of this competition. The Conti Cup remains a serious target for both of these clubs. If City do get to the final, Nick Cushing won’t be around to coach them, he leaves the club after Sunday’s WSL clash with the Gunners.

TEAM NEWS
Jordan Nobbs is expected to return after suffering heavy bruising in the defeat to Chelsea, after which Jordan was seen leaving the stadium on crutches wearing a protective boot. Joe Montemurro told me on Sunday, “She’s fine, it’s just a bruise, she could’ve played [against West Ham], but we decided not to risk it with the games we’ve got coming up.”

Jen Beattie will be checked having spent the last month nursing a calf injury, while Katrine Veje’s return date is not yet known due to a troublesome foot injury. Danielle Carter [knee] is definitely out, while Caitlin Foord is on international duty with Australia.

LAST TIME OUT
Arsenal defeated Manchester City 1-0 in the WSL at Meadow Park in October thanks to a first-half goal from Vivianne Miedema. The clubs last met in the Conti Cup in last year’s final at Bramall Lane, which finished 0-0 after 120 minutes, with City prevailing 4-2 on penalties. An 87th minute Emma Mitchell goal separated the teams at Meadow Park last May.

THE STATS
Arsenal have won the Conti Cup 5 times, but have won the League Cup [including the 5 wins in its current guise] a total of 15 times- a record in England.

Arsenal’s 5-2 defeat to Manchester City in September 2017 is the only time to date the Gunners have conceded 5 goals in a WSL game.

The teams have met in 3 previous Conti Cup Finals. City won 1-0 at Wycombe in 2014 and won the 2019 final on penalties at Bramall Lane. The Gunners were 1-0 victors thanks to a Vivianne Miedema goal in the 2018 final, also played at Wycombe.

City left-back Demi Stokes and Arsenal midfielder Jordan Nobbs showed up for the same trial for Sunderland’s centre of excellence at the age of 7. They were the only two girls to pass the trial that day.

City captain Steph Houghton won this competition twice during her spell with Arsenal [in 2012 and 2013]. City striker Ellen White played in both of those teams too, also winning the trophy with the Gunners in 2011.

Caroline Weir was an unused sub for Arsenal in the 2014 final defeat to Manchester City, but started for City in the 2019 final against Arsenal. Jen Beattie started the 2018 and 2019 finals for Manchester City against the Gunners, but won the trophy with her current club in 2011, 2012 and 2013.

PLAYER TO WATCH
Unbelievably, Vivianne Miedema has yet to score in 2020 and only has one assist to her name since the turn of the year too. There has been little deviation in her actual performances and ordinarily, she doesn’t worry too much about barren runs in front of goal so long as her teammates are scoring. But she will be keen to end what represents, by her standards, a drought. 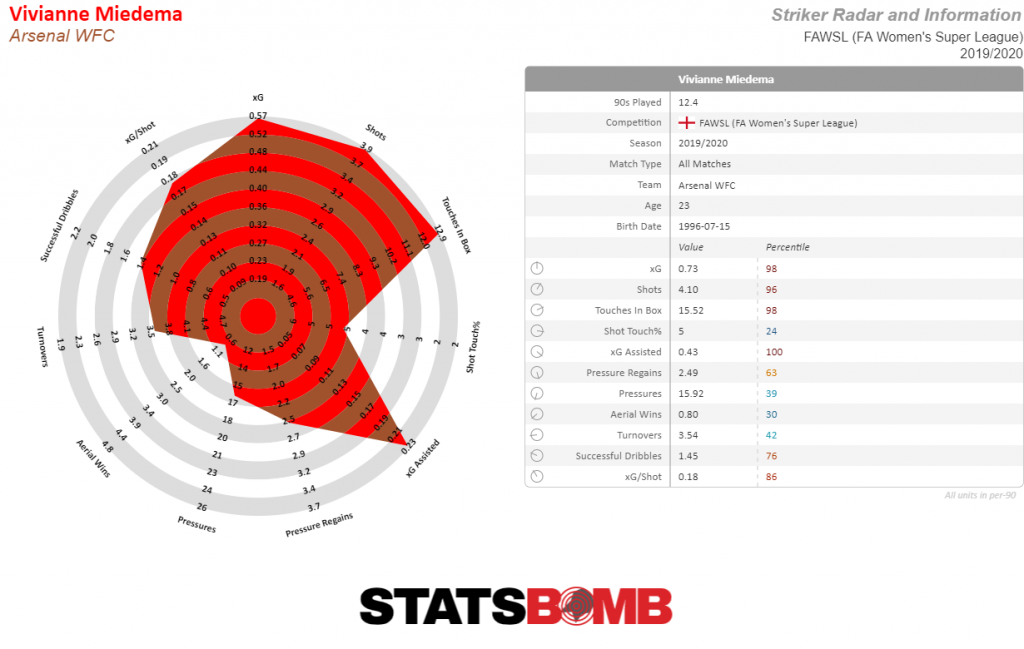 In WSL terms, her XG is in the 98 percentile and her XG assisted in the 100 percentile. Miedema’s cool finish in the last game between the teams proved to be the difference in October. City have a solid defence and Miedema’s quality will be required. City showed some nerves on the ball in defence against United when pressed by United attackers and Arsenal will have clocked that.

THE OPPOSITION
Manchester City are a very effective cup team under Nick Cushing, having hoovered up both domestic trophies last season. Games between Arsenal and Manchester City are rarely anything other than close, nail-biting affairs. City had a little more churn than they would have liked over the summer with Claire Emslie, Nikita Parris, Abbie McManus and Jen Beattie leaving the club, while Keira Walsh agitated for a move too.

However, new signing Ellen White, only just returning to fitness when the clubs met in October and German striker Pauline Bremer have comfortably replaced the goals of Nikita Parris. If anything, City’s attacking threat has assumed another dimension. If they do have a weakness, it’s potentially at right-back.

Cushing fielded attacker Georgia Stanway there against Manchester United on Saturday and have regularly started Canadian forward Janine Beckie in the position. Regular right-back Gemma Bonner has shifted across to centre-half with new signing Aoife Mannion rupturing her cruciate ligament earlier this season. Nick Cushing will leave the club at the end of the week and that might just give the City players an extra 2-3% as they seek to give their long-serving manager the ideal send-off.

How Manchester City’s Pauline Bremer Got Her Groove Back https://t.co/vlRAQx1llO

HOW TO CATCH THE GAME
The game kicks off at 7.30pm on Wednesday evening at Boreham Wood’s Meadow Park. Tickets are available on the gate at £10 adults and £1 for kids. The match will be streamed live on the FA Player app, which is not geo blocked.

COMING UP
We’ll have all exclusive player reaction on the site on Wednesday evening, as well as the usual preview and exclusive match reaction from Sunday’s huge WSL clash away at City. If you haven’t read it yet, I spoke to Joe Montemurro about what Caitlin Foord can add to the Arsenal squad when she joins them next month.