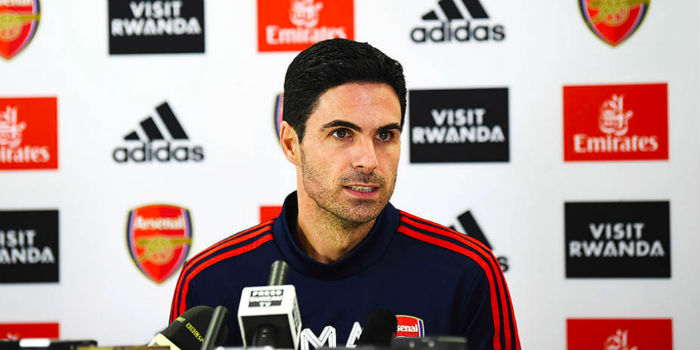 Mikel Arteta says his Arsenal side will always play their own game and go for the win, whether they are at home or away.

Arsenal travel to Stamford Bridge tomorrow, less than a month since the Blues snatched a late 2-1 win at the Emirates in Arteta’s second game in charge.

While we’ve not seen a ‘new manager bounce’ when it comes to results, the boss maintains that hard work on the training ground is paying dividends.

Asked what he’s learned about his team since the Boxing Day defeat, Arteta told his pre-game press conference: “A lot of things happened and it seems longer than a month to be fair with the amount of games, days that we trained and the amount of things that happened.

“Yes, a lot of things changed, a lot of positives that I am finding in terms of reactions and the things that they are taking onboard. We have managed to change, a little bit, the energy and the atmosphere and the relationship and the chemistry with our fans, which was massively important for us.

“So yes, in terms of results, it could have been a little bit different. I think we’ve been very unlucky and there are other aspects as well which have influenced that but in general, yes.”

Reflecting on the last meeting – a game that earned Gunners real plaudits for their first half showing before a late collapse – the boss continued: “It’s different from then to now. I loved the first 30 to 35 minutes and the way we went about it.

“How aggressive we were, how much we wanted to attack them and put them under pressure – it’s the kind of way that we wanted to play.

“After that, we had a little bit of a setback. They changed the system and we found it a little bit more difficult to deal with that. We started to defend deep without really conceding anything, and had some great opportunities on the break as well.

“I think physically for us in that moment it was harder for us to maintain the same amount of energy. Against Chelsea, that’s vital.”

One thing is clear, Arteta will not be parking the bus in West London.

“It doesn’t matter where we go, my ambition is to go anywhere and win playing our way. We want to go with the same direction every time and with the same intention.

He added: “It’s really important [to win]. It’s very, very important for us to win this game to fight for that. Also, the game we played at home, it could have made a big difference and we were very close to it. Tomorrow we need to win.”

Arsene was criticised for years, for refusing to be more pragmatic away from home in the big games.

Emery was originally praised for his pragmatism, then castigated for that very thing.

Hopefully we get something tomorrow, we’re capable of beating Chelsea on our day.

And a loss would be really damaging.

At the moment, not much can be damaged.

Things can always get worse…. It’s all well and good trying to implement a philosophy, but if you don’t have the right squad balance and characteristics? Then sometimes you need to be pragmatic. If Arteta can’t prove to the players his methods can produce results? Then he could lose them pretty quickly. I like Arteta, and think he needs a couple of years free hit, so he can get his house in order, I said the same for Emery, that is was a 2-4 year job. But if Arteta can’t keep us treading water? Then the reality is, he’ll either… Read more »

I think this is the first time I agree with you Rich!

I agree with Rich too. Jury is still out for Arteta. I’m giving hi the benefit of the doubt and I see some reasonable things to be optimistic about. BUT it has thus far not translated into what we need most, results. Still, a number of players have responded not least Auba (tracking back better) but also the midfield duo in Torreira and Granit (given better more discipline positioning brief). Media pundits like to praise Torreira (and rightly) but choose conveniently not to acknowledge the vast improvement in Xhaka (off the line clearance kept us in the game but also… Read more »

We have zero balance praising Arteta and professing the love to have him right the ship over 2 or 3 seasons then complain about Emery and not give him even 2 seasons. Neither of Wenger, Emery or even currently Arteta helped by our poor market decisions and neglect of certain outstanding needs in key areas. And BOTH Emery and Arteta working with same assets. Arteta as yet not punched above where Emery fell too (in part exacerbated by fans denying him use of Granit) Arsenal fans are a convoluted bunch who are self conceited and think they deserve better. We… Read more »

Absolute chat, if you can’t see the clear improvement under Arteta v the absolute shambles and lack of direction under emery, you should probably head to specsavers.

I would argue that Emery denied himself the use of Xhaka due to how he completely botched up the captaincy situation, and how he failed to recognize the building fan frustration. He delayed naming Xhaka captain for weeks (months) knowing that Xhaka was not a fan favourite, then still named Xhaka as captain in the end after hiding behind a “player vote”. He should have known that he had effectively turned Xhaka into a lightning rod by dragging this whole affair out. He then proceeded to sub Xhaka off in a match where fan frustration was at its peak. When… Read more »

We’ve been here before. Arsene presided over wins against Chelsea but then we went into a rut.

Unai beat Spurs and we look the real deal stringing a series of wins but then went on a rut.

I mentioned when we beat United nothing is proven yet.

I wonder how long some of you are going to keep choking on fancy press conferences and “positive changes.”

Don’t know about the rest of you, but I kinda need 3 points to start replacing all this talk.

The performances are what has and always will be key for me. As long as the team keeps out performing the opposition, which the stats show is the case, results will improve. It’s still way too early to moan about Arteta’s results, when the team has been so below par for so long. Win, lose or (another) draw, the plan is there for us to see. The main goal is to avoid relegation this season, back Mikel in the summer, then make judgements next season.

Performance is pointless without the win…(no pun intended)

We are in the results business.

…well technically you get a point for a draw.;)

Results are a symptom of performance. As long as we out-perform the opposition, results will correlate with that. Emery’s unbeaten streak last season, never convinced because performances were so poor and ultimately results reflected that. The opposite will be true with Arteta, as long as metrics show a continued higher level of performance.

Manganese you are right for the results.
If I were you I would wait until the end of next season.

I’m optimistic we gon trash Chelsea @ their ground so they’ll know how it pains coming to the emirates to win.
Up gunners!

Let’s hope the dirty chavski fuckers get beat at Stamford Bridge. Played dirty fucking murderball, got away without a second yellow and had to resort to a Leno error to equalise. Come on you gunners, nothing a little martinelli saka magic can’t take care of.

It’s been play to draw this season it seems. We need a full 90 minutes of hard work with a bit of inspiration.

If Chelsea can lose to Newcastle I’m sure we can do it.

How we sustain through 90 minutes is key. We seem to drop coming out of the half. Last match wasn’t so bad but I feel particularly concern that Arteta is yet to find efficiency subbing players who are dropping off in off ball energy levels quickly enough. OTOH, he does not have much depth in capability. Players like Ozil and Pepe have responded somewhat to the new gaffers approach but Ozil is a 55-60minute player at best. Arsene knew this. Pepe may give you a flash of brilliance at any time but more than not he is spent after 20… Read more »

Chelsea actually have s fairly poor home record this season, I fancy us to do some damage if we’re up for it.

I’m keeping positives. I feel we can win it as well. They tend to be more expansive these teams and that gives us opportunities on the break in particular. BUT we have yet to find full efficiency when transitioning and our forwards still need to be sharper. I’d definitely start the same trio in Laca up top with Martinelli and Pepe on either flank supported by Ozil. But come second half, we need to rotate and keep momentum be it in midfield or on the flanks. Nelson maybe useful in lieu of Pepe just to add more bite off ball… Read more »

fucking Chavs knew they got lucky last time. we’ll destroy them tomorrow, I have no doubts.

The really BIG match is 2nd of May.

Liverpool have run away with the title bad enough. BUT we won’t want them to win the “new Invincibles”.

The least we could do this season is win that home game. Win not draw. Win.

We would effing disgrace the Invincibles generation otherwise.

Win being the operative word. We have zero improvement until we start winning again. Thus far Arteta knows he has done no better given same squad as Unai. Fans may prefer to believe otherwise and profess they are in for long term but the gaffer knows if we go into the summer far off of 5th or 6th never mind CL, we will have an even harder rebuild. Sanlehi has committed 105m between the misfiring Pepe, the non-existent and still as yet to be proven young Saliba and the panic buy Luiz. Much of this money is back loaded at… Read more »

It’s so funny to see some people like santori moaning about Arteta. Did they think a coach/manager is a magician, he came and the results will automatically become good and start winning games in a consistent basis. Everyone must know results need time, Arteta don’t have a transfer window nor a pre-season to work with his squad. Please remember, even it took Pep one FULL season to make things right at Man City and they eventually win the title in his second season. With our resources less than Man City, how you expect Arteta to do anything so fast when… Read more »