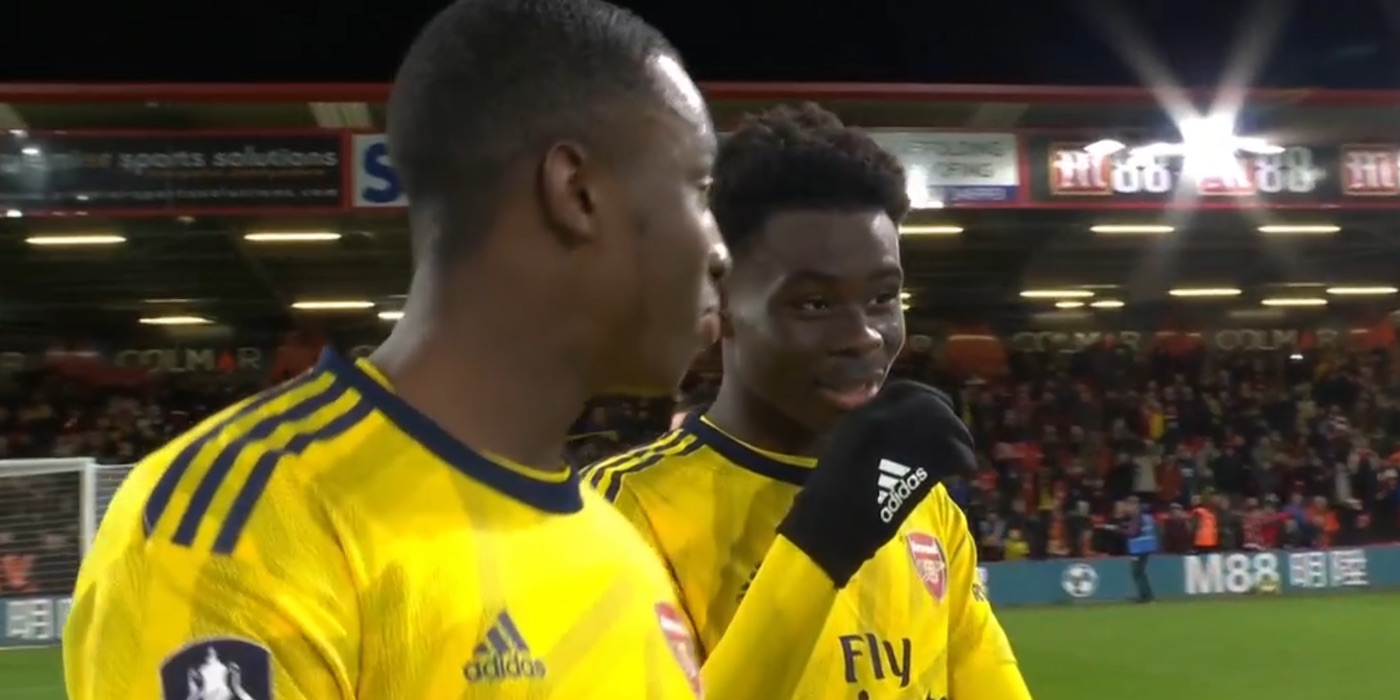 Arsenal’s 2-1 win over Bournemouth last night was out first away victory since beating West Ham on December 9th, and only the third game we’ve won on the road all season.

In came in no small part thanks to the club’s next generation, an exciting crop of young talent who represent the future.

Three 20 year olds (Matteo Guendouzi, Joe Willock and Eddie Nketiah), and a couple of 18 year olds (Gabriel Martinelli and Bukayo Saka) were pivotal to the performance and the result, and a clearly delighted Mikel Arteta was full of praise for them afterwards.

“They were terrific,” said the Arsenal boss.

“Their work rate as well. For me it’s the courage to play, you know, to make big decisions, to not be scared and play safe. That’s the difference with these three kids. Eddie again was terrific and Joe as well.

“I really like Joe in that position. I think he can be an outstanding player playing there and he showed that tonight.

“They are important in this side. They are not the icing on the cake, no no, they are probably the core of that team at the moment and to play with that accountability and decision, I really like it.”

Not only are they showing real character in the way they play, they’re also coupling that with end product and that’s a massive positive when some more senior players are struggling to do that.

Check out today’s Arseblog: Bournemouth 1-2 Arsenal: The next generation make their mark

The opening 30 minutes was exhilarating.
it was nothing to do with the Cherries tactics, it was pure brilliance by us.
just accept it ( and love it!)

I agree, that was our best 30 mins for
quite some time. As the fitness gets
better, the 30 mins will get longer..

Great play. Bournemough aren’t in great form at the moment but are still a PL side.

Lovely to see some youngsters coming through that look like they have a great chance of succeeeding. To be playing that well at 18 to 20 is fantastic.

All our young guns where starting to slip a bit, before arteta arrived. Ljungberg gave them trust and advice, but being a temporary solution with a lot of compromises there was only so much he could achieve. Arteta is probably more tactically skilled, and has a very clear and complete vision, managing to instill that vision so quickly is a masterful achievement, with the talent of our young buys projecting into game changing performances – hats off to 2u Arteta!

The one bright spark this season. Young guns are prepared to execute the gaffer’s orders and put in the work. They are hungry. Contrast senior players. …we see some improvements by some of the players, Torreira and Granit have benefited from more efficient instructions from Arteta, Auba tracks back more, Ozil tries a bit harder but still far harder to get some of these players to execute to plan with as much vigour as young guns. Just look at Pepe. We paid 72m for this fellow and he is 10% of what Martinelli is giving. They both came in at… Read more »

Good comments, but I think you’re being a bit harsh on Pepe. He’s a real threat on the ball, and he’s improving as the season goes on in tracking back. His final ball is poor, but he’ll get that. Few players can carry the ball like Pepe and Arsenal can really use that.

The future is bright. And so we go marching on.

The future looks bright to me.