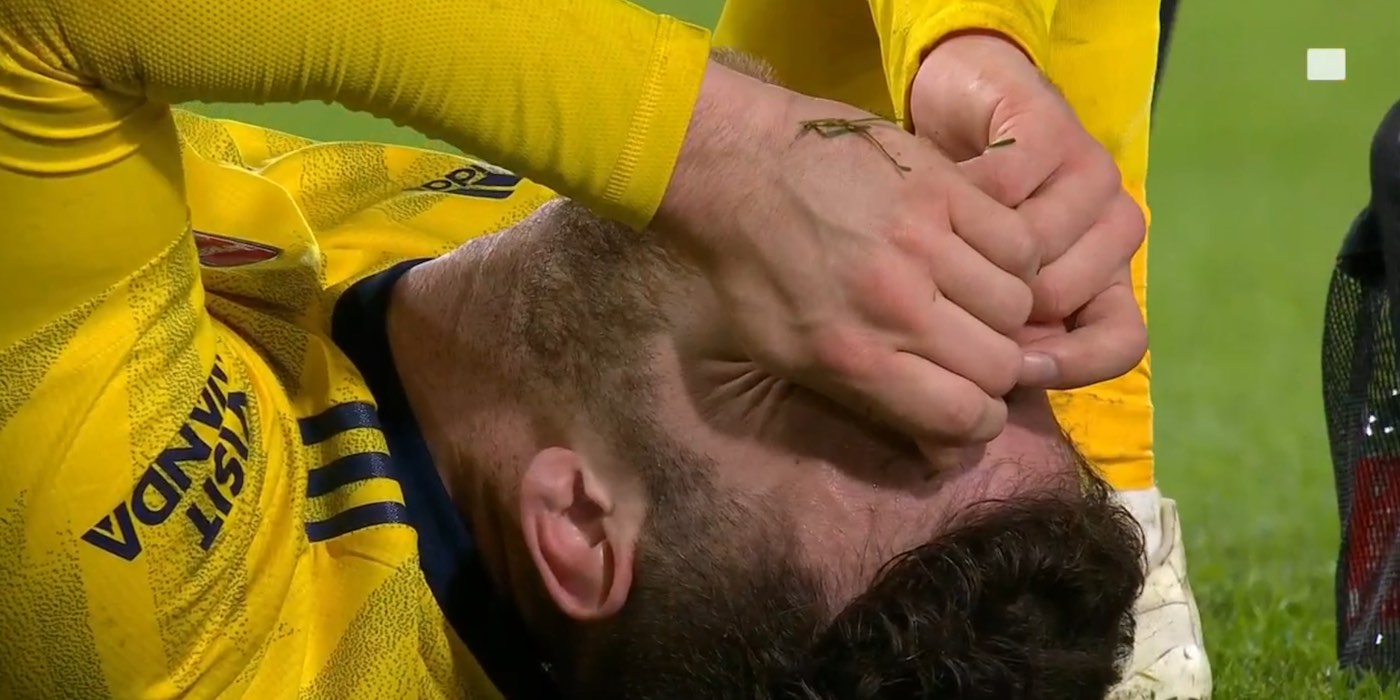 Having already lost Calum Chambers to a season-ending injury, the last thing Arsenal needed was for another central defender to pick up a serious injury.

Unfortunately, that’s exactly what seems to have happened, with Shkodran Mustafi stretchered off during last night’s 2-1 win over Bournemouth in the FA Cup.

The German landed awkwardly, and appeared to sustain some damage to his ankle which ended his night and raised further questions about Arsenal’s depth in that position.

Possible left Achilles rupture, lots of stress on the tendon landing like this. Hopefully not ? pic.twitter.com/qlLyHVsTOI

Afterwards, Mikel Arteta was unclear as to how bad the extent of the injury was but admitted it didn’t look good. However, he insisted that it would not change the club’s plans in the transfer market this week.

Yesterday reports regarding Spanish defender Pablo Mari were far from promising, with the 26 year old returning to Brazil after the Gunners and Flamengo failed to find agreement on a fee. There’s some suggestion negotiations took a step forward last night but it remains to be seen what will happen.

The injury to Mustafi would seem to add some urgency to matters, but when asked if it would impact spending before the transfer window closes on Friday, Arteta said, “No. We had a very clear intention of what we wanted to do in the market with the resources we have and if we can do it, fine.

“But his fitness won’t change anything. We are in the market, the club is trying to facilitate one or two bodies with the resources we have.”

If Mustafi is out for a prolonged period, it would leave Arteta with just three senior central defenders, and with two of them over 30 and with a lot of football to play, it’d be a massive risk on the club’s part not to strengthen in some capacity.

Such a shame. Was the best player on the pitch and really looked brimming with confidence. The way he was dictating the play from the back, damn some of those slick passes and 60 yarders were better than Luiz’..just showed why he’s still top class on his day. Shame.

A Different George
Reply to  SuperTomRosicky

After his horrible mistake against Chelsea, Mustafi was very good. At Bournemouth, he made a single poor pass early, but it didn’t cost us, and he was, as you say, possibly the best player on the pitch (well, except Saka). His injury probably means we’ll never know now whether Arteta could have restored him to a place as a first, or at least, second-choice centre-half for us.

If the reason we’re not pursuing this transfer is todo with us not being able to finance a £9m fee, then there’s something far wrong with how this club is run!!

Xhaka can play in defence, we have plenty of central midfielders, don’t we?

Should we have to play a midfielder who excels in midfield just because the c&nts who own this club can’t cough up 7-9 million? Xhaka in def would disrupt the whole tactic of him dropping back to lb.while saka bombs. Forward etc. #kroenkeout

Agree. It’s chicken feed in this market. Granit has done well, but centre half is a difficult position to play. A top side would expose him there.

The owner put 72M in Pépé and we all were happy with him, for once. We failed to qualify for CL and the club lost money. There are consequences if a team does not perform on the pitch. Lot of fans used to glorify the fact that Arsenal was run like a business and not like a rich man’s toy.

Still think Mavro deserved a genuine shot at the first team, I know it’s hard to find your feet under all the pressure but he was a beast and had bags of potential.

Arteta psyche masterclass, now Mustafi isn’t bothered about failing himself but failing this guy who he respects. It’s a different angle at motivation

Surely it has to. When the injury crisis is bad enough that you’re forced into playing a guy the club has written off and tried to push out the door, and then even that guy gets injured, you have to make a signing, this surely can’t even be up for debate.

I think he has to say this. Our bargaining position has just been weakened but Arsenal/Arteta has to pretend it hasn’t….

I guess we’ll eventually recall Keown and Pat Rice from retirement at the rate at which the injuries come.

One of the downsides of the Arteta influence and change.
At times, the willingness to make a challenge can bring 2 or 3 players j umping in for the ball.
They are committed and brave now, it’s a big positive change overall.

We kinda have an omen with defenders getting long time injuries when playing good enough..I hope it’s not that bad..he was turning his season around

Pinch of salt. Arteta’s not going to come out and publicly say, “Fuck me, we’re desperate for a centre half now…”

Particularly when we’re haggling over the price of a centre half.

I don’t mind missing out on Mari if they are planning something special for the summer. The last thing we need is a wage burden from players that Arteta doesn’t want long-term.

Makes me wonder why we let Mavropanos on loan