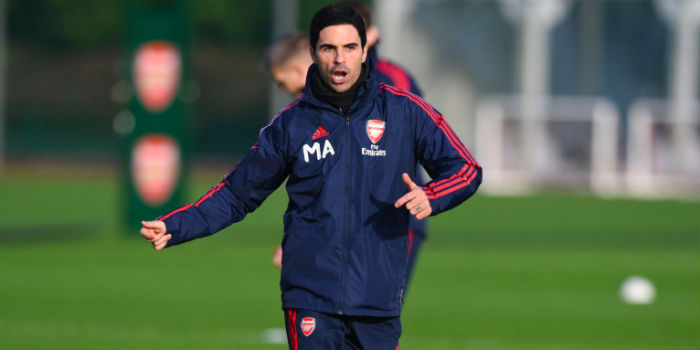 Mikel Arteta has played down the chances of Arsenal splashing the cash this month.

The Gunners are believed to be looking for recruits in both midfield and defence but the Spaniard doesn’t expect to welcome big-money signings at this point in the season.

Instead, he’s looking for an upturn in the performances from the players he’s inherited from Unai Emery.

“I’m expecting big things from the players I have at the moment, the players that are recovering from injuries.

“That’s the biggest expectations from my side, they’re there.

“If we can find something to help us go through the season in a more balanced way in certain areas, and is helpful, we’ll look at the options.”

Having lost Kieran Tierney until March and with Calum Chambers missing the rest of the season, we are a bit short at the back and as such, Arteta says we’ll be keeping an eye out.

He said: “We always have to be looking because obviously we have some bad injuries for players who are going to be out for a long time. We have to see if we can find options there.”

These comments would suggest that rumours linking us with RB Leipzig’s Dayot Upamecano are probably wide of the mark.

We spent a lot in the summer, this window is largely for topping up where needed.

And anyone we buy will have to get used to the PL and playing with our other players.

Having said that our other players are only just getting used to that, now they have Arteta to guide them.

We should recall Joel Campbell.

Is he still around?

We should buy Higuaín. Maybe he’ll say yes this time.

We spent alot but still get enough from the players sold. Pepe was bought on installments. Where are the money?

He seems determined to get the most out of the hand he’s been dealt, for better or worse. He’s already shown that he doesn’t want to sell Xhaka, and I wouldn’t be surprised if we don’t see big sales this winter – which would be necessary to fund any big transfers after this summer’s overlay and the tight pockets upstairs. Plus it’s the winter, no realistic potential targets are screaming perfect fit. I would have liked to see some defensive reinforcements obviously, and maybe we’ll still get them in some shape or form, but going for more stability with who… Read more »

The winter is such a tough time to find players & given the one we supposedly want (Upamecano) is in the middle of a title fight I don’t see him coming until summer. The squad will likely look very different in September but for now Arteta likely is going to have to make due with the players he has. There’s enough here to think a push for the EL is doable – top 4 is going to require almost no slips from here on out which is unlikely.

Why did we sell monreal ?

Because Mystic Meg isn’t employed by Arsenal & we couldn’t predict both LB’s would suffer injuries.

Some of us certainly warned that might be possible…
That sale didn’t make much sense then, makes less now.

Yeah, but we bought Tierney injured and unable to play at first. Would have been better to keep Nacho and sell him now – or not sell him, given the current situation.
However, it is my belief that Nacho wanted to return to Spain and this was somehow promised to him, maybe under the condition that we get Tierney.

I’m not sure a long term replacement at LB makes sense financially in the context of a situation where our longer term prospects in other areas such as CB appear weaker. A loan option until the end of the season may be more viable. That said, I have confidence in our youth setup to provide internal solutions under Per, Freddie and Mike’s tutelage. Our academy graduated left-back Tolaji Bola (captain of the U23 team last week), along with Saka, can help cover for Kolasinac until Tierney’s return. There are other options too: once Bellerin is back fit he could perform… Read more »

It could also be that Arteta is saying these things to strengthen our hand in the transfer window. It doesn’t help us to say we are willing to spend all the money..

While that’s what most of would wish, I wouldn’t be surprised if the only addition this window is Boateng from Bayern. I just hope if that were to happen, it’s only a loan.

Aging players Bayern wants to get rid of- think Schweinsteiger or Hargreaves- don’t tend to work out too well. I hope we don’t go anywhere near Boateng

Agreed. The reason Bayern want to be shot of his is that he has been, frankly, horrible so far this season.

I do think the players we have are better than they’ve shown for most of the season and that is evidenced in the upturn in form recently and the better performances. With more understanding of Arteta’s ideas and a higher fitness level these players should be able to push for top 4 in the end. Tricky now but not impossible. So I’m not expecting any January business. We used to always be the fittest team in the country. It’s crazy how low energy/knackered the players have looked and that’s going to be the thing that needs a lot of work… Read more »

Miss out on top 4 by 1 point and rue the inaction for a second season running? Couldn’t happen could it?

“If we can find something to help us go through the season in a more balanced way in certain areas, and is helpful, we’ll look at the options.” With all due respect to all involved, do we not have an entire department and director of football that should have been looking for these options since it became apparent ages ago that we’d need defensive reinforcements? Yes I know players become available late in the window but surely we should have had a shortlist ready before the 1st of Jan already and should have have made moves to acquire them by… Read more »

Who should we buy then? In most cases the players a club want in the January transfer windows aren’t available. It is better to wait till the summer than to buy someone just for the sake of buying.

Yes and this should be made public to everyone? So that all our competitors know who we are going for and the clubs and agents can put the prices up. They probably do have said list but getting them is a whole different kettle of fish.

Sounds to me not any different then Wenger saying “we will only buy Top Top quality” or when Unai mentioned he wanted to work with the existing players first.

“Mikel, show us your hand, we need a piece out asap”

I honestly believe we have to say goodbye to an attacker. Auba or Lacquer must leave, because, together in the first team they are not compatible. Auba can’t be a good left winger and Lacazzete is not a busy forward. So by selling one of them, we would bring Ziyech, an offensive foursome would be perfect: Ozil, Pepe, Lac / Auba and Ziyech. And, the most important point, is the reinforcement of the defense. At the moment, I believe Boateng would greatly help with his experience and baggage of numerous titles.

The Spoon
Reply to  Luã Soares

I needed a good chuckle this afternoon and you have provided it. Thank you.

Its me
Reply to  Luã Soares

Sorry Lua Soares but your pretty incorrect with this I’m afraid. Boateng is passed it and I bet he wouldn’t of even come into your head had you not read it here a few days ago. And to label Lacazzette as “not a busy forward” is just bonkers!

Santori
Reply to  Its me

Eh… more likely Martinelli will assume Auba’s role. Maybe Nketiah will come in if he kicks on. Probably not going to add anyone spectacular if we don’t make CL again, in defense likely we will bring relatively untested Saliba in (since we paid so much for him) Maybe a striker will be brought in but it would have to be a lesser price, Zaha as ever a potential target but if he has lower pricing. We are a cheap club made worst by recent achievements created by our cheap nature in the first place… Boateng was a good option for… Read more »

Laca does his job perfectly and that’s to haggle/harrass opposing defenders while Auba does the finishing off his work. So, though Laca need to rediscover his scoring boot, they are both perfect at what they do best.

Hakim Ziyech extended his Ajax contract shortly after the close of the summer window.

All those people expecting big transfers or somehow imagining things will be radically different…think again. As expected. We’ve spent 72m on Pepe and 27m on Saliba committing 20m per yearly transfer window. Also we have yet to offload on Elneny and Mhkitaryan let alone Mustafi. Market availability is another issue. I expect loans will be the bigger possibility. Emre Can as I have mentioned before available and can cover both deep midfield and Cback. Considering we will likely have a bit of a rebuild in the summer and prey to key departures again, it won’t be a bad thing to… Read more »

You’re having a laugh if you still think that Emery was the right man for us.

I think we have a realistic target with Emre Can but not sure what Juve will want and there will be other suitors. He is not utilised enough for whatever reason. He’s PL experienced, can cover BOTH CM and Cback, and is only 25yrs. A loan with option to potentially buy would be a good thing for us. We have Granit and Torreira really in midfield so another experienced player into the mix to keep competition/ alternative will be great. GUendouzi can also play there but also maybe higher up in lieu of Ozil when need be and there is… Read more »

And for the price we paid for Saliba, may as well see if we can get him in early, maybe send Mavropanos on loan the other way. Might as well find out if he is the real deal BEFORE next summer window. as I understand though, he has received the Arsenal curse early and is out injured still.

Mattheiu Debuchy probably owes us a number of performances considering his availability when with us. Maybe we can get him on loan.:D

He’s saying if we can get Boateng for a low price, we’ll do the deal and that’s it.

People slamming Pepe and D. Luiz straight after we got a new manager… Pepe is the real deal, people believing otherwise should start watching some games. D.Luiz was terrible under Emery, but so was everybody else. He was rock solid against Chelsea and Manchester United. Rob Holding has been injured for 9 months, people who think he will go straight back to his prime needs to relax. Give the man time, we have a wonderful manager who will get the best out of him. Yes, we need reinforcements (mainly a CB and a LB), but reading some of these comments… Read more »

If we’re struggling at FB why not put in a cheeky bid for Doherty at Wolves? He can play RB and LB. No frills FB, but solid and dependable with a decent engine.

So he’d probably cost about 60m in the January market then.

Ah well, it was a nice thought while it lasted…