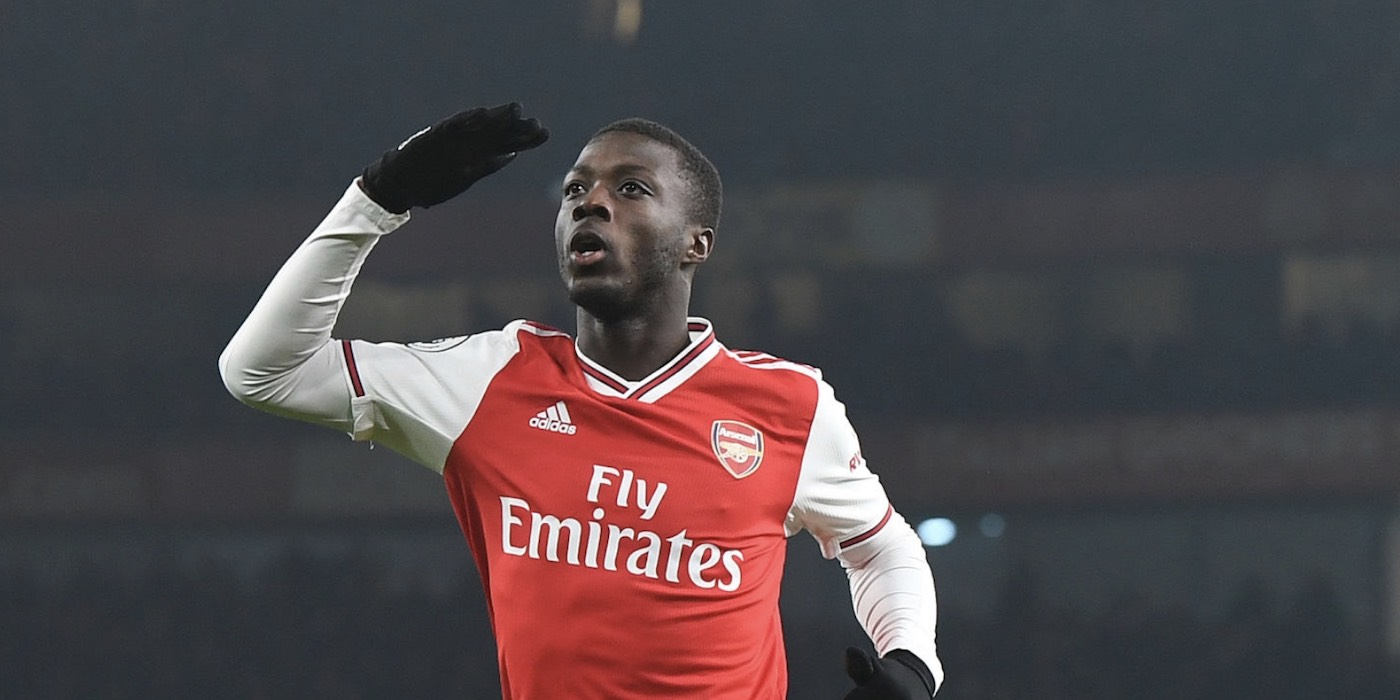 Nicolas Pepe’s Arsenal career hasn’t quite hit full steam yet, but the record signing was handed a start last night, and played a significant role in the 2-0 win over Man Utd.

He scored the opening goal, and his corner led to the second, thumped home by Sokratis late in the first half.

Although he was taken off just after the hour mark, and didn’t look too happy about it, he spoke positively after the game, and what it will mean for the squad.

“This one feels a lot better,” he told RMC. “We scored twice, we conceded zero goals. This will really do a lot for everyone’s confidence levels.

“We are doing a lot, a lot of video during training in order to perform well during the match. Today we performed well, we were solid defensively, we were good going forward.

“It is all new for us. A new system, new instructions. We are adapting quickly. That has been seen in the last three matches, even though we did not win, we were very good, we were just missing the victory, which we were able to do tonight.

He also revealed a chat with Arteta beforehand, in which the new manager told him he was going to be picked.

“I had a discussion with the coach this morning and he told me I was going to start and asked if I felt ready and stuff like that,” he continued. “I told him I felt ready. I showed tonight that I was ready.

“As well, today it is my mother’s birthday, I scored today, so it is only positive for me and the team.

“Now we have to go on a run to get to this top four that we need to do.”

He got his mum an Arsenal goal and a win for her birthday, what a thoughtful lad!

The Mamas and the Pepes…
Coat, door, yep…

Is this Pepe’s 1st post match interview after joining us?

He has been very good going forward. Hopefully, he will do his bit defending as well (till we sort out midfield and defensive personal at the end of the season) and earn his regular starts.

It was good to see P-A-L supplied by Ozil finally.

our attack has changed its name to Starburst

I really like him. Watched him a lot in France and thought it was an amazing signing but only now, with a proper coach will we see what he can do. He’ll be a beast for us.

I’m pleased for him, I like him a lot and I think he’s going to be massive for us in the future. A lovely present for his Mum and all of us, thanks Pepe!

Get him one on one and its a done deal…He will shred them haha!

Ya Gooner
Reply to  The Arsenal

Luke not so Shaw.

sam
Reply to  The Arsenal

Pepe came, he shaw, he conquered

He had Shaw on skates???

Can it be his Mum’s birthday everyday?

You are too greedy!………Every week will do.

I think so. Had we lost, goodwill and confidence in Arteta would have dissipated very quickly. As is, there is a palpable growing belief in his methodology. Certainly some key players seem on board particularly Ozil and Torreira who have responded well but also Granit. And if Arteta can concentrate on prioritising and fixing midfield, he will have good remedy to build upon for other areas. Forthcoming window should give us opportunity to fix at least one of the problem areas not addressed last summer – Cback and/or CM. But getting all players to work as a unit and put… Read more »

Pepe can improve. Still a lot of off ball work he isn’t doing well enough.

A couple of sporadic good showings does not make for convincing return on big investment at the moment.

We need him to sustain effort over 90 minute entirety and not flail his arm and amble back when his take ons do not come off.

I thought he was good on the day but he is far from as good as many prefer to imagine and needs to be kept level headed.

We need more from him.