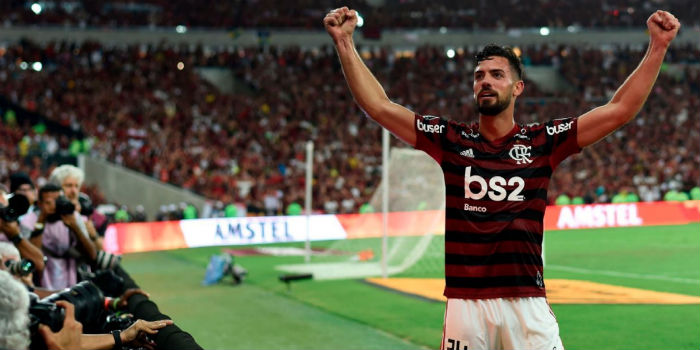 According to Globo Esporte, the outlet that first broke the story of Arsenal’s interest in Pablo Mari, the centre-half will travel back to London today to complete a loan move to the Gunners.

It will be his second transatlantic trip in just a few days. As we all know, he arrived at Heathrow last Saturday with Technical Director Edu, and underwent a medical which he passed without a problem.

However, the trifling matter of agreement between the clubs scuppered his chances of signing and he was ordered back to Brazil by his parent club Flamengo.

They wanted to sell him, Arsenal only wanted to loan him, and the sticking point appears to have been a clause over an obligation versus an option to buy him at the end.

Negotiations between the two sides continued this week, and it now seems as if they’ve found a deal which suits both parties. The 26 year old will spend the rest of the season on loan with us, and for that we’ll pay the Brazilian outfit a fee of around €5m.

This is more or less what we paid Barcelona last season for Denis Suarez. To put it in perspective, Inter Milan were seeking a €7m fee for Ivan Perisic last January.

Right now, it’s a little unclear as to whether there’s a purchase clause of some kind in the deal, but that should be revealed as when there’s confirmation of the signing – the word is there’s an option for us to do it, which makes a fair bit of sense.

Hopefully the player left some of his bags in a storage locker at Heathrow so he can deplane with alacrity carrying just hand luggage, allowing him to more quickly have the chats with Charles Watts who we assume will be waiting for him in arrivals.

Great stuff! Does this mean that we will get two centre backs this window?

Maybe. We have at least four aging/unsettled CBs. A new project is needed

Hopefully its an option to buy, not an outright purchase. God knows the last few loan signings for us have been downright terrible.

Yeah…better to try before we buy tbh.

Disclaimer: My boss doesn’t use gel

My thoughts exactly, after Dennis Saurez, am not even sure Ceballos will succeed with us. He’s gifted yes, but a bit slow and likes to keep the ball a bit too much for my liking. At times 1-2 touch is all that is need, as a number 10, you see spaces and teammates way before you receive the ball, then make things happen, De Bruyne has mastered the art, hardly has to beat a man or men, receives and passes, makes a bit of space, makes a pin point cross. Ozil has that in him, only if the top three… Read more »

Suc situations created are ridiculous. So much uncertainty around decision making between both the parties. However, hope Mari becomes a world beater with us. COYG

The Scourge of Gooner
Reply to  K-Gooner

It is definitely not ridiculous.

All negotiations have a give and take, and neither side can show their hand or need to sell or buy. It’s no coincidence that soon after the “Mari goes back to Brazil” headlines, there were subsequent headlines of deals being “done” in Ukraine and Southhampton. Add to that the news that Mustafi is not seriously injured, and magically the Mari deal is back on.

If you can’t handle back and forth negotiations tune out bro.

Worth a punt, surely.

A bit under related but does anyone know how Saliba is faring at the moment?

Played his first game back from a two/three month injury last night in the French cup. Played really well at the beginning of the season. Didn’t watch last night’s game, but he did get a full 90 minutes in….

Does your boss get all his player reviews from arseblog.com?

I watched the match to see how he got on, he was excellent. Obviously he cannot take all the credit but he played a large part in them keeping a clean sheet.

Just saw this on Reddit… Apparently he had a great game last night. 90 minutes, 8/10 duels, five clearances and a clean sheet.

I can’t wait to see this guy in an Arsenal shirt!

At least he flew first class

“Would you like a shitload of money, señor?”
“Si, Por Favor!”
“Fly to London, speak to those blokes. You may or may not have time to pack, you may or may not come back for a few days, but it’s a SHITLOAD of money”
“Si, Por Favor!”
Pretty sure it’s nothing but par-for-the-course in international transfers. Until something is signed, nothing is signed.

Bro could have traveled for literally any reason ??‍♂️

Welcome Pablo! Glad to have you on board. First time you run onto our grass, wearing the red shirt, you’ll forever be one of us. Genuinely excited to see you in action. Oh, and apologies if we get somewhat unpleasant when we don’t play well. It’s not you, it’s us. We’ve been spoiled with some excellent football in our lifetimes, so there’s something to live up to. You might have heard, but we’re the greatest team the world has ever seen! How about that!

Poor dude must be jet lagged by now

I wonder if there is a groundhog day type
scenario where Charles Watts asks Mari if
He looks forward to joining Arsenal and he then has to get on a flight back to Brazil.

Imagine the soul searching conversations he’d have on the way back.

After many thousands of do-overs, he’d know the life stories of all the passengers and fly the plane back home.

Hopefully it’s an option to buy at the end, incase it doesn’t work out. Can go for that Shakthar guy in the summer, who will just have a year left on his deal

I got kind of excited today reading a 90min article about Matviyenko today, even though he is just 5’11”. Really great on the ball, I guess–he has 26 key passes this season in 25 games! Granted, that’s the Ukrainian League, but there was a mention of him playing occasionally as a DM, and with a left foot like that, I couldn’t help but start wondering if Arsenal might see him as a replacement for Xhaka (eventually) with the way Arteta’s been using him. Probably just some crazy thoughts, but I figured I’d share them anyway.

You can always dream, and dreams never die.

The thing is Mikel can start working with whoever he gets in now. Time is of the essence

For God sake ,can we get Grealish from Aston villa for ozil replacement.

He’ll probably fly back again because he thinks he’s left the iron on!

As much as we are strengthening centre back we also need a play maker who is hardworking, I wish we get jack grealish from Aston villa

Once again, a remarkable comeback for Arsenal

Off the bench at the weekend to smash a header home from a corner. Stuff dreams are made off. Obviously we’ll be 4 nil up by then, but still ?

We are the Arsenal

I know he will have a blinder of a season to make sure he is signed on a permanent contract.

He will then have a more blinder years ahead to ensure he has a statute of his own.

Great Stuff, I for one thought a loan deal makes more sense given we have Saliba coming next season, Chambers will recover, Holding will recover his form, We still have Luiz for at least another season, Papa, as well as Mustafi, Mav is coming back after his loan deal. We would be bloated with so many bodies there we only need 4. Three have to go if we add another body permanently that would be a bit much, messes up chances for our youth boys to gain minutes in the team. After the showing against Bournemouth we have reasons to… Read more »

The MARIage is back on.

Blogs seems to be concerned about his lack of ‘top-flight experience’. He’s
certainly gained a great deal of flight experience recently- hope it was first
class, and he turns out to be an undiscovered gem…

This guy’s display v Liverpool on youtube is impressive

What an unnecessary addition of carbon footprint !!

Maybe we get to see “Mustaffi Maldini” unleashed?

I’ve just had a proper look at this guy for the first time. I must say, Oh my! He makes me feel things in me nethers. ‘Bout time we had someone to replace Giroud’s looks in the dressing room.

We always do it The Hard Way the Only Way.

Tim Vickery South American football expert rates this fella highly, maybe he is a late bloomer, nice to see the club is trying to back Arteta in this window in a position needed. Still scratching my head about that Suarez loan deal last season.

Out of pure curiosity I took a quick look at the relative flight lengths for this kind of travel, this poor human. The flights are ~ 12 hours in length, so in a span of 5 days he flew for around 48 hours. Ack.

Somehow I suspect the media always exaggerate our transfer stories to make headline news. Load deal in the middle of the season may be a good option after all. The only worry is that, if Mari plays very well, somebody else may come in and scoop him up at the end of the season. Who knows?