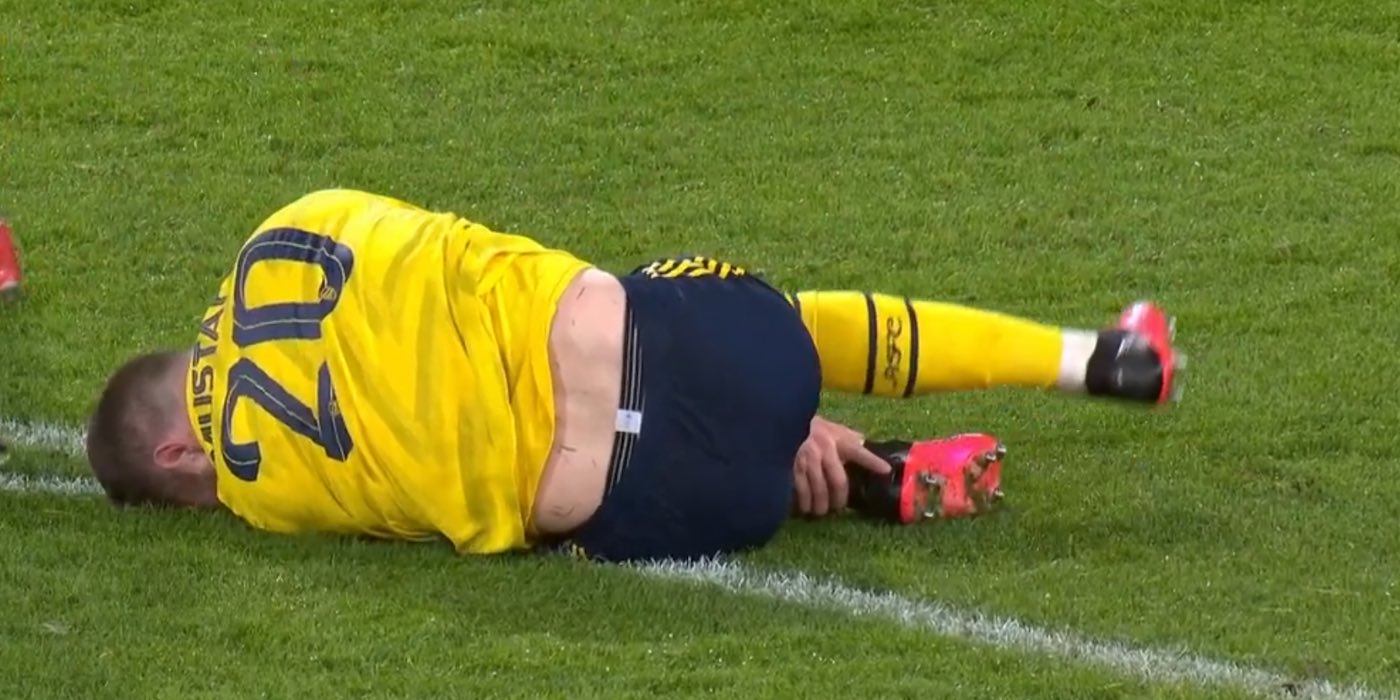 Fears that Shkodran Mustafi might be out for a prolonged period have been alleviated this evening after the club briefed that the German has only suffered a sprained ankle following his awkward landing during the 2-1 win over Bournemouth in the FA Cup last night.

The German was stretchered off in the second half, leading to concerns that his injury might sideline him for months, but it now appears not to be quite that bad.

Bit of good news for Arsenal – Mustafi's injury is a sprained ankle and not as bad as first feared. Not expected to be out for too long.

A sprained ankle might still see him miss some matches, but with a two week break after this weekend’s trip to Burnley, it’s a fixture-lite time of the season in which he can recuperate.

Meanwhile, Arsenal are still attempting to do some business before the end of the transfer window on Friday.

Negotiations with Flamengo over Pablo Mari are still ongoing; reports from the Ukraine say we’ve agreed a fee with Shaktar Donetsk over the transfer of left-sided centre-half Mykola Matviyenko; this evening we’ve been linked with a move for Southampton right-back Cedric Soares.

Mikel Arteta insisted last night that an injury to Mustafi would have no impact on the club’s potential business this month.

“We had a very clear intention of what we wanted to do in the market with the resources we have and if we can do it, fine,” said the boss.

“But his fitness won’t change anything. We are in the market, the club is trying to facilitate one or two bodies with the resources we have.”

Phew, lucky that he isn’t so bad.

Though some may disagree…

The ones who disagree would really be showing their upbringing and the reason they’ll die alone.

Harsh comment.
Though, on this space we all know what you mean.
Have a rec!

Do you think Mustaffi has improved since ArtetaBall was initiated?
He is spraying some delicious passes about, maybe he will have less defensive stress from now on, a pattern of play that suits him?
Wenger destroyed defenders. Tactics count.

Good news, he really didnt deserve an achilles injury, the guy has just started his Xhaka redemption, his name was sung by the fans…

I’d like to see a signing from the Premier League. No adaptation period, no risk, and most teams have better defensive stats than us anyways.

I agree. Even the lower leagues may have some great players. There’s too much infatuation with foreign players. The English leagues can still produce some quality players especially defenders

Seems like part of the issue is that these guys will cost an ungodly sum usually on account of being homegrown. The best bet seems to be to try to find guys like Holding, while they’re young and show potential, and take a chance on a cheaper deal knowing it may or may not pan out.

I’d also worry that the prices of these English players will only go up even more now on account of Brexit.

I think the key is timing. Not many clubs can drop 50m on a full back, but bissaka for me is United’s best piece of business in a very very long time.

I’m not being sarcastic here but how will Brexit result In British players coating more, genuinely interested

Mustafi was actually having an alright game as well!

Not to kick a guy when he’s down, but Mustafi usually has an alright game before he does something very Mustafi like

Maybe our defenders and “DMs” won’t be under such pressure and will play better now that everyone defends. No more PTSD!

To be fair it usually happens when he feels there is no backup around him and just panics. I think he is surrounded by teammates and Mikel has impressed on the squad anyone could make a mistake and just help a teammate out.

The psychological side of his management us impressive.

He actually did play really well. Perhaps there is hope for him yet.

The support would be a small help if nothing else and I’ll be really, really impressed if Arteta turns him round. Mustafi reduces me to near-panic at least once a game but I’m pretty sure there’s a player with useful abilities in there somewhere.

Arteta seems determined to find it and if we’re not getting rid, we the fans should remember what shirt he wears and treat him accordingly.

Good news. Haven’t seen a more miserable look than Mustafi’s when we conceeded off his error. Sliced through my heart I really felt for him. Fair play to him redeeming himself with an excellent replay the rest of the match and up to the last match. The fans singing his name was very much deserved and that’s exactly what he needs to build his confidence. He is one of us and I’m relieved he won’t be out long.

Pray that he continues where he left against Bournemouth

I can understand how people are excited about a possible redemption but boy do football fans have short memories. He’s literally had one good game for us. He single-handedly costs us about 10-15 points a season. We really shouldn’t be expecting anything from the guy now and look for other options.

Sounds good, but if we’re struggling to find a handful of millions to get a new player in, you have to ask how much of a reduction in quality we can actually afford.

Yup. He’s hot garbage. A complete headcase and one of the worst central defenders I’ve seen.

If you were watching him for the first time last night you’d have been impressed. His distribution was positive too. Obviously Bournemouth didn’t put him/us under much pressure but he also showed commitment after his howler at CFC. Some of the criticism he has received was justified but some of the abuse he (like Xhaka) received was totally OTT. Hopefully he’ll be available again once we have 2 games a week, after the winter break, to continue his footballing rehab like Xhaka. Regardless, it’s still good to see we’re in for defensive reinforcements. Fingers crossed we have one or two… Read more »

I hope Arteta is the one making the calls for the type of players he need, cos if the board is buying for him it will. mean more work for him. Get well soon Mustafi.

That’s a relief, he was playing really well and it
looked like a nasty injury. Musti is tough, I’m
hoping he can come back soon and build on that good performance.

Some Facebook comments are pretty nasty. Nobody should be happy to see a player injured (maybe a mild muscle strain in an opposition player in a cup final aside)

If Mustafi cut the mistakes out of his game and became a world beater wouldn’t that be the best redemption story ever? Glad he is ok.

His passing was excellent I thought?

Absolutely – hit so many pinpoint long balls and seems to have that valuable knack of weighting them just about perfectly.

See what playing attacking football can do! The players are happy, the fans are happy and everyone is more forgiving. Two months ago we would smile in the shadows for a Mustafi injury. Now Arteta has found a role where Xhaka’s deficiencies are not exposed. Shows sometimes it’s not the player’s fault but the system’s.

Long may this mood continue!

Good news. Apart from that clanger at Chelsea Mustafi has been good under the Arteta regime. As I’ve said before, he can actually play the game; the problem has always been with his judgement. Perhaps some high-quality coaching could help. Tony Adams is available, I believe.

Good news indeed – he’s may just be finding his mojo… last night he suddenly morphed into our new long ball cross field raking laser pass specialist! He can certainly hit a ball long and very true and most were perfectly wieghted – almost better than Xhaka or Luiz.
He still has that tight-sphincter heart in the mouth look about him when under pressure at the back but might just be a confidence thing – if those calamitous monthly errors can be cut out of his game, he could just be alright for us

Hi blogs any reason all my posts are awaiting moderation? Been like it for months!

Make him a ‘ball playing’ centre back please Mikel and sell him to Woodward for big monies like everyone else.

Not a surprise. We’ve been saying all along that he can’t catch a break.

The way he was writhing round you’d have thought the thing fell off.

Can’t stand him. At least this means we can still try to sell him in the summer.

Excellent news, I am happy for him and hope he can continue the fine form he showed against Bournemouth.