After the winterlull it was nice to come back to Arsenal getting their first win, in what feels like forever. The scoreline looks great but it is flattered a bit by two late goals in what was ultimately a deserved win for the gunners.

Hopefully with two more matches in this seven day period, Arsenal can take this and create some momentum.

Arsenal 4-0 Newcastle: By the graphs 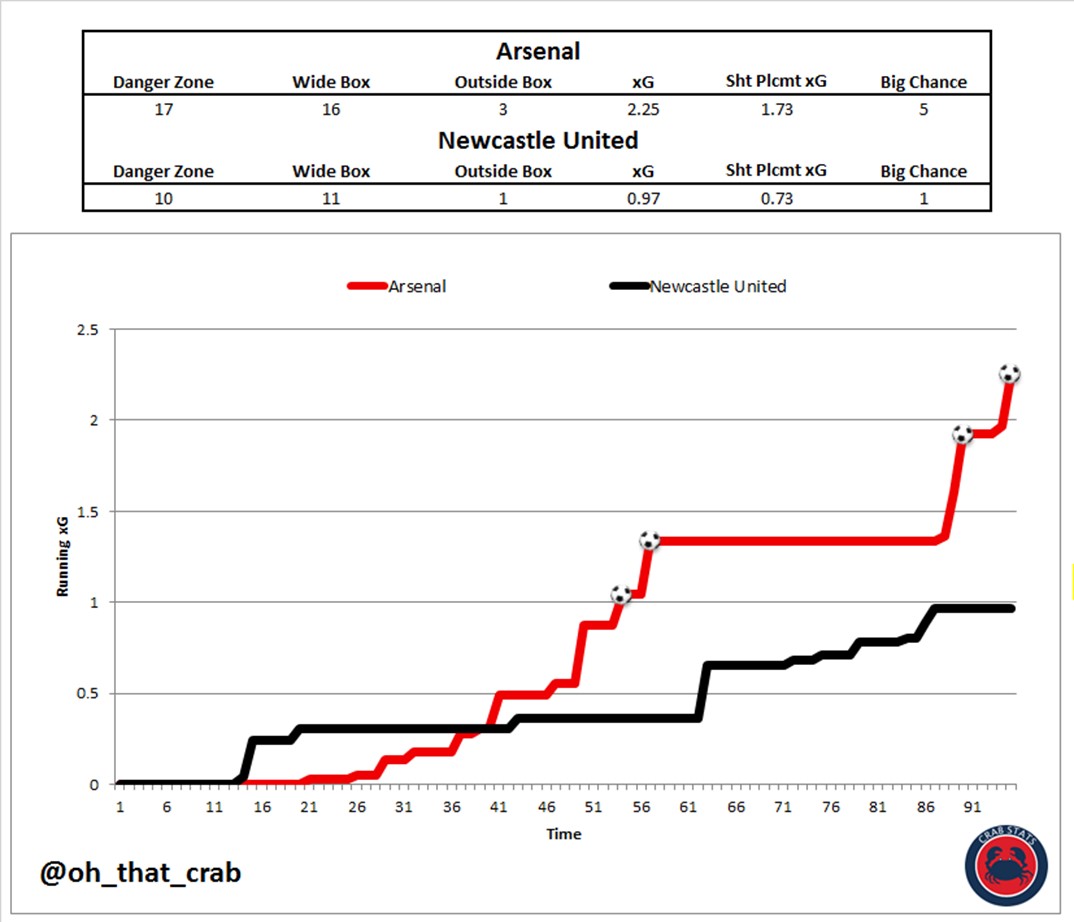 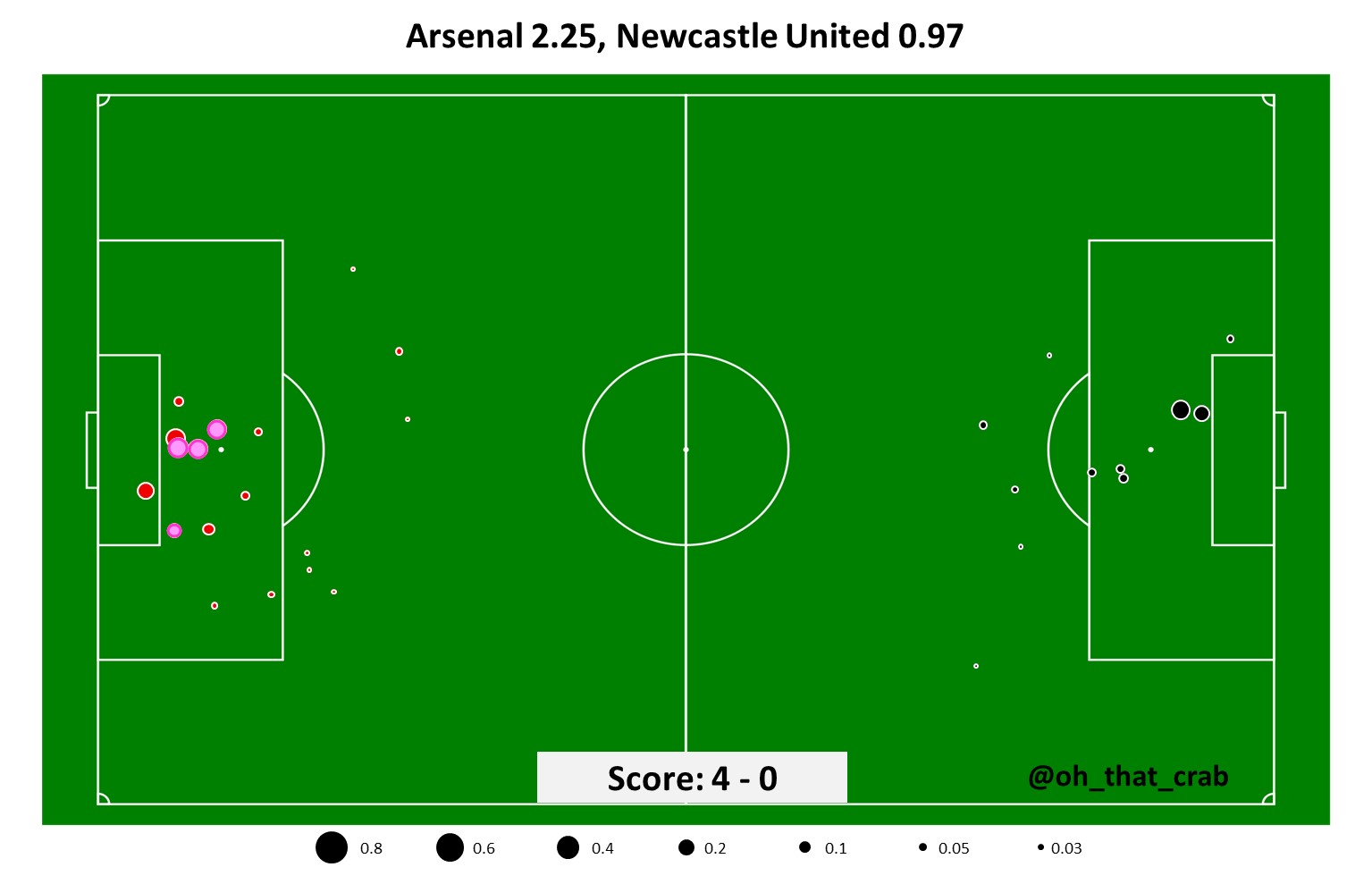 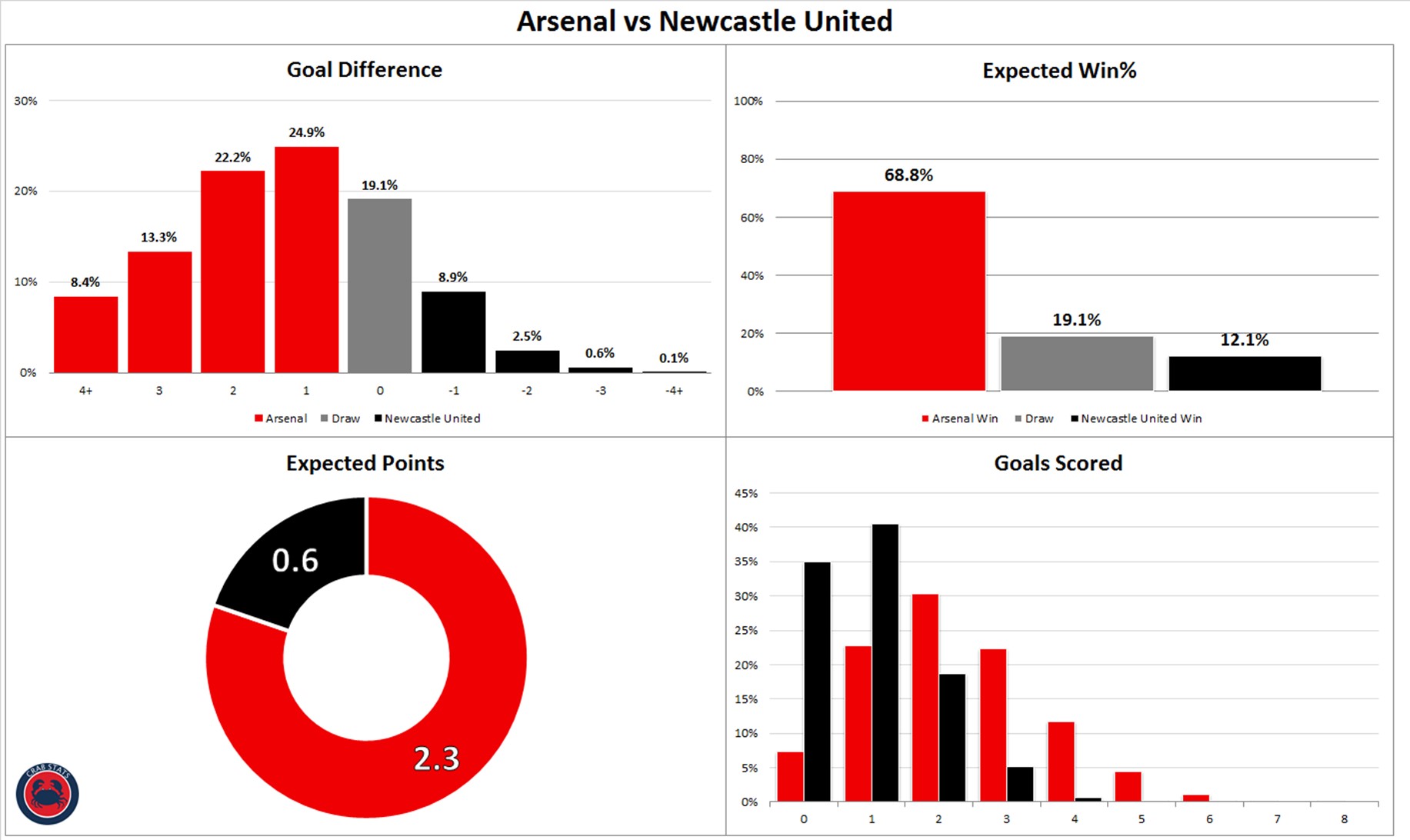 36 – Touches in the box for Arsenal

19 – Touches in the box for Newcastle

10 – Shots in prime locations (11 meters or closer) for Arsenal

8 – Shots in prime for Newcastle

0 – Four goal leads blown! Going up 4-0 doesn’t feel as bad when Arsenal can hold on to the clean sheet!

Arsenal dominated in getting the ball into deep positions but the number of deep possessions for Newcastle (not known for their attacking ability) is probably a worry, especially with how many of those turned into shots.

3 – Shots, second among all players

4 – Key passes, tied for first among all players

8 – Touches in the box, led all players

2 – Successful dribbles, tied for third among all players

2 – Carries into the box, tied for third among all players

9 – Completed passes in the box, led all players

2 – Tackles, of 2 attempted, tied for most on Arsenal

This is the kind of match that you expect from you record transfer signing. Pepe did everything for Arsenal and even was impressive and turning dangerous dribbling into end product, which is something that has been missing from his game this season. Hopefully this is something that will lead to more great performances from Pepe.

Eddie gets a start up top

33 – Touches for Eddie Nketiah, fewest among outfield players who started.

5 – Touches in the box for Nketiah, tied for second most on Arsenal.

2 – Shots for Nketiah, tied for third on Arsenal.

It was a big move to drop Alexandre Lacazette for Eddie Nketiah by Mikel Arteta and I am not sure it exactly worked out. It made some sense considering the form that Lacazette was in but Nketiah struggled to link play in a similar way that Lacazette typically does and he often found himself disconnected from the Arsenal attack. That being said, Nketiah did have a great chance to put Arsenal ahead and found himself in dangerous spots more often that you would expect for a player on the ball so little.

Sources: Opta via whoscored, staszone, and my own database.

0 – worries about the team going forward ?

Jeez. I’ve been worried every time we go on the pitch for about 7-8 years. I’ll settle for having gone to “hopeful” – but “not worried” is a ways off still 🙂

Would love to be that optimistic though if we give Everton the same chances close to goal I’m afraid they won’t be as profligate.

If we can beat Everton as comfortably, I’d get much more optimistic.

Well I hope laca is back in the lineup, nketiah looks far far from being a regular starter at a Premier league club. Clumsy touches, poor passing and movement. And bad touches. Long way to go. Also how’s his xG 0.39 when he missed an open net sitter?

What it show is that shot was not a total sitter and is frequently missed by every striker. Being played slightly behind him and fast made the chance harder.
Of course I was disappointed he missed it. But I still remember Henry putting the ball over the bar from a yard out!
Lacazette is more natural for a game where the opponent sits deep, but I also think Nketiah is going to score a lot of goals for Arsenal with the game he already has.

Nketiah doesn have a future at arsenal. He will end up at one of the bottom half clubs. I was gonna say mid table but that’s exactly what arsenal are now.

And you sound really pleased about that.

He’s got plenty of pace, he’s aggressive, and has an eye for a goal.

He’s just starting out, one knows how young players will progress.

Considering the deep dive last time in By the Numbers, was hoping to see a little focus on Ozil who made the Arsenal attack look really good. Still, great to read the stats support what looked like an excellent game for Pepe. More, please!

the article you mention was written by a different author. Tim of 7AMKickoff wrote the deep-dive, Scott writes the match by the numbers regularly

The reaction of Arteta was great to watch when Ozil scored, he was whipping his fingers in the air and big grin on his face. I think he liked the creative team goal as much as Ozil scoring.

Hey Willis, Quick question unrelated to this post, but, What is the difference between our data-driven player acquisitions and Liverpool’s? Because, It appears we both acquired players based on statistics and theirs worked out.

Not too sure about these numbers. Nketiah has more xG than Pepe? Pepe only has .37 xG when he has a wide open shot, on his best foot, essentially from the penalty spot? That looked like a goal as soon as the pass left Saka’s foot, much less when the shot left Pepe’s.

Probably to do with how crowded the box was, position of keeper and fact that it was a first time finish.

Also, what were Pepe’s other two shots? They may have been very low percentage.

Dropping Laca worked out really well, it gave his system the electric shock he needed to shake of his curse and find the net again. It would have been even better if Eddie took the next step in being a true contender for 1st 11, but I am sure he will take the learnings and get new Chances.