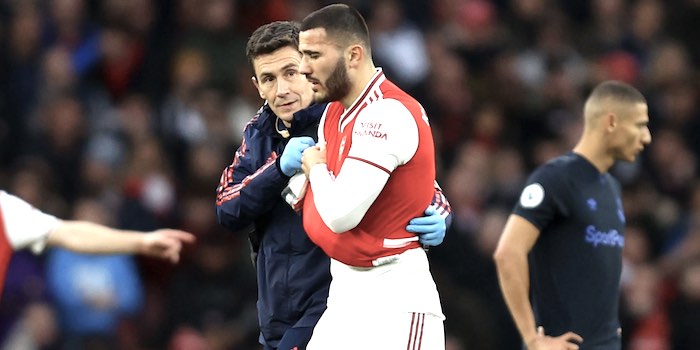 Mikel Arteta says he’s not yet sure of how serious the injury to Sead Kolasinac is, but says it doesn’t look good for the left back.

The Bosnian international landed awkwardly after an aerial challenge with Djibril Sidibe, and initially – with blood coming from his mouth – it seemed that was the issue, but he was helped off the pitch using his shirt as a sling.

He has damaged his shoulder but in the immediate aftermath of the 3-2 win over Everton, the manager couldn’t say definitively how bad the injury is.

Asked if it was a dislocation, Arteta said, “I hope not. I don’t know, it looked bad. To be fair he was in a lot of pain but we will have to assess him tomorrow and see how he is.

This was his first appearance since the 1-1 draw with Crystal Palace on January 11th, and it now looks as if he’s set for another spell on the sidelines.

Let’s hope it’s not as bad as it appears to be.

He’s a very good squad player but at this point, Saka playing out of position is better. How far off is Tierney from coming back?

He really has been unlucky with injuries. I hope it’s not so serious. Get well soon Tank. Weird having both LBs having shoulder injuries….

Poor lad hes having a very tough season, I wish him well and hope his injury isn’t as bad as it looked.

I appreciate his effort, sorry about his injury, but I’m not going to miss him as a player, he’s not up to what our standard should be. Hopefully he’s sold this summer and gets a regular spot somewhere else.

You realize he is Ozil’s good friend so is therefore protected against any negative opinion.

Criticising someone for their performance is one thing while assessing someone’s usefulnes like a phukn toy, especially on the day they get a painful injury is..

You know you don’t have to immediately publicly post everything that pops into your head.

We kind of need Kola, to be honest – Saka looks exhausted; without Kola, we have no backup. We can’t play Saka every game. It’s just not going to happen.

Decrying Kola’s standard is absolutely missing the point when there is no other legit, fit LB backup.

Poor guy. I love his attitude. This guy will go through the forces despite the odds.

I wish him all the best.

Prat commentator was blaming Kolasinac for the first goal bc he kept them onside. Frankly, the problem was we were slow and unaware to the second ball when Luiz fluffed it. As for Kolasinac’s injury, very unfortunate. We could well have done with him back in and ability to push Saka higher on to the wings. Hopefully, Tierney gets back in soon. Kola has been very effective when available but this season has been interrupted with injuries. Again many people simplistically think along lines of zero sum game but frankly we need at least two strong options in each position.… Read more »

Sure looked dazed when coming off. Awful unlucky the way he landed – whole lotta lad hitting the floor. Hope he bounces back quickly, always loved his enthusiasm!

He’s turning into another Debuchy. Injuries finally taking him away from the Arsenal as someone else takes up what could have been his opportunity. I mean if Mustaphi could turn out as he as yesterday being another of his fine days who knows what Sead could have become.