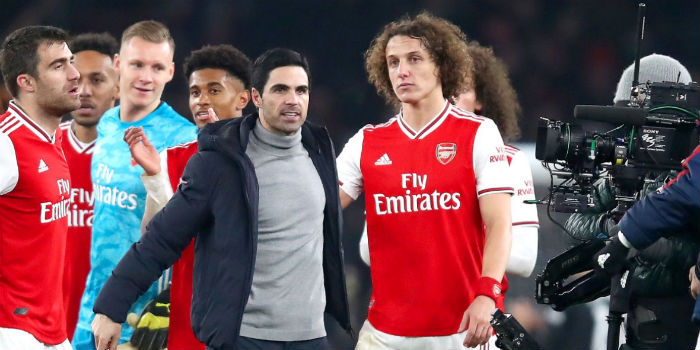 David Luiz says he’s been very impressed with Mikel Arteta’s coaching philosophy since the Spaniard took over as head coach at Arsenal in December.

While results on the pitch leave room for improvement, the defender insists that the fact the players are enjoying their football bodes well for the future.

The Brazilian’s words echo those of centre-back partner Sokratis who said after the 2-0 win over Manchester United on New Year’s Day that the ‘fun’ had returned.

Luiz also played up Arteta’s wider vision for the club, which has been built on an understanding of the club’s history and traditions, learnt during his days as a player in N5.

“When you know why you are doing something, I think you start to understand the way and the how of walking in this way.

“Mikel knows that, he has tried to help us and give us the direction and how to live life, how to be inside the club and for me, this is so important to have.”

Arsenal’s players will gather in Dubai tomorrow as Arteta treats them to a few star jumps under blue skies. The boss is eager to further foster a good team spirit before trying to rescue a decent finish from a traumatic season.

The trip also represents a chance for new signings Pablo Mari and Cedric Soares to get to know their new teammates and for Arteta to take stock of the good, the bad and the ugly from a hectic first six weeks in charge.

Luiz is looking forward to more time with the Spaniard whose ‘dream big’ ideas he’s happy to buy into.

“What Mikel is trying to build is something big,” he said.

“The first thing is to believe. If you don’t dream, and you don’t believe, then your dream is impossible.

“To do something, I think the first thing is you have to dream, and then you believe you can do it, then after to study how to do it, and then to understand during this process you’re going to have some good moments and some difficult moments but you can never change your mind, you can never change your mentality and you will always have to come back to the beginning and understand.”

I must admit I really like David Luiz as a person.

I’m cautious of him. I’m pretty sure he was sandbagging Emery earlier because the shift in his performance levels have been the darkest night to the brightest day. He’s one of those guys that can do as much good as harm depending on how the mood suits him.

We’re luck to have him.

We’re lucky to have him and he’s lucky to have Mikel. Organisations are about people and people skills. So having two emotionally intelligent and yet Ruthless individuals (Xhaka also) is good for your company

Ya Gooner
Reply to  Artetas Assistant

At this point gooneroo I’d say they were all ready for emery to leave shown by laca not even celebrating when he scored. It just meant it was time for him to go tbh.

goonero
Reply to  Ya Gooner

That’s not quite the same thing, I’m saying Luiz was actively and willfully playing far below what he is evidently capable of. You can be unhappy but still give it your version of your best under the circumstances, Luiz was intentionally facilitating Emery’s exit.

I suppose what’s been discussed here is whether it’s possible to play at anything like 100% if you’re not happy & the reasons for the unhappiness are a lack of a plan, clear instructions & motivation from a manager?

I was just about to post the same thing. No need to now

even though I like Auba this feels a bit more ‘captainy’ – you can see in the huddles before games that Luiz is the player they all listen to….not advocating moving the armband on, just interesting that it seems to be him that they wheel out for these types of media.

I hoped he’d be captain when he signed. He’s a travelled/experienced natural father figure.

He’s a great character, but he’s far too emotional for the captaincy. He was a major factor in Brazil’s humiliation in the World Cup. You need a Thiago Silva type next to David, to keep him level headed.

Our League form looks like I fell asleep on my D key.

Give over, Arteta joined mid-season during a crisis and immediately sorted out the defence. Let’s give him a full season before we pass judgement.

I’m not passing judgment on Arteta. I think he’s great 🙂 I don’t think the players are, though.

None of your comments show that you understand the concept of a ‘Process’ and the effects detailed guidance can have in any professionals life. What you’re experiencing is bigger than football. Maybe you need some guidance yourself feeling so cranky

Cranky? I’m not cranky at all 🙂

The Voice of the Noise
Reply to  Artetas Assistant

He’s posted three separate smiley faces, how can you can him cranky?!
Had they been cranky faces, well..

Artetas Assistant
Reply to  The Voice of the Noise

Son, Believing every smile is from the heart is how you get a dagger in your back.

Haha I think we found the REAL cranky one!

This guy have one of the toughest skin…

Against Chelsea can we just give him d armband to spite the blues?

But yet the club, the fans and gradually the media and the FA and VAR supported them. They eventually became successful.

This is our time to support our very own.

We’re incredibly lucky too.
both Klopp and Pep woulda killed to join Arsenal and continue/improve Arsenes legacy. But we’ve got our own ‘Person-specialist’ and he’s one of us and I believe he will be an upgrade on both his former Masters (Arsene and Pep) and Klopp

Every interaction is life is between brands. I am a brand, you’re a Brand, your 2 year old is a Brand.

What about Russell Brand?

Do you learn anything Kid

For me, Luiz is the captain we should have. He is a leader and also has the charisma and personality to engender a winning mentality

The same Luiz that said we will make a top 4 he is a dreamer get rid of him he is finished.bring new quality centre back to pertner Saliba next season.if he was good do you think Lampard would let him leave,ye sure

You dislike a guy because he’s a Dreamer ?? ?? I’d get rid of you immediately

We SHOULD get rid of Luiz. He is an older mistake prone defender. Come summer we will need to cull. We have 8 Cbacks. Sokratis (unless he wants to leave which is a possibility) we should try to keep. Holding maybe. Saliba will come in. Mavropanos will be assess following loan. Mustafi and Luiz out. Unless Mari somehow turns out to be a beast, he will probably be let go at loans end. If not he will potentially take the place of one of Mavropanos or Holding. Also with a question mark on long term future…Chambers. Get a grip. Have… Read more »

I know he has his critics but for me he has been our most consistent player since Arteta arrived, love the guys attitude and you don’t achieve all that he has over his career unless you are a good player. had a difficult start at Arsenal due to circumstances not in his control but with the new guy in charge i recon he will prove to be a great signing. looking forward to seeing how it goes with Mari, real potential there for an interesting defensive partnership, both players like to find a pass from the back, could really open… Read more »

Most consistent at the back is Sokratis. He should be captain unless he is thinking of moving…

Luiz has had his moments.

lovely player too.
the concentration lapses are so momentary but carry consequences………I’m hopeful he can address that, cause he’s nearly the complete defender

He should never have been bought if we had better ability in market beyond Sanlehi. Frankly we could/SHOULD have bought say Soyoncu at Leicester for 35m instead of waste 27m on a future potential Saliba and then have to add 6-7m on Luiz as a panic buy band aid solution, now spend another 5m on Mari as yet another band aid. And 72m for Pepe also now looking folly. Could have got Ziyech or Fekir in for FAR less at 20-25m mark. Sure we pay up front but rather do that go in the red for a season and not… Read more »

No where near complete. He’s about as complete as Mustafi is but older…

I dunno, I don’t feel the current sentiment by some people that we are improving under Arteta. I’ve seen some good common sense improvements with midfield (Granit – Torreira) and with some of the defending but we said the same thing when Unai first took charge and he had gone off on good unbeaten runs back then. As as yet, despite ‘improvements’ we have yet to claw our way past teams around us near tenth let alone close to Europa spots. Sure 4 to 7 points separates us but we don’t seem to be able to close the deal. Recent… Read more »