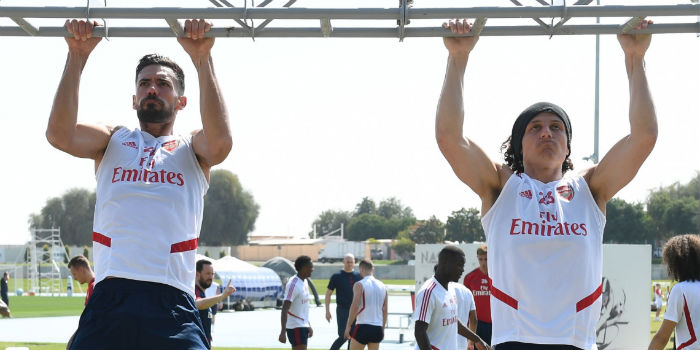 David Luiz says Flamengo coach Jorge Jesus has told him that Pablo Mari is ready for the Premier League.

Luiz and Jesus struck up a strong bond when the pair were at Benfica together and have stayed in touch ever since with the Brazilian defender keeping particularly close tabs on the Portuguese coach when he accepted a position in his homeland.

Jesus has earned plaudits for his work in Rio where he led Flamengo to both the Campeonato Brasiliero and Copa Libertadores titles with Pablo Mari in the centre of defence.

“I speak with Jorge every week, he’s really my friend,” Luiz told the Evening Standard. “He told me to welcome him in the best way because Pablo is ready to play.

“He’s a great player, he did amazing in Brazil under Jorge Jesus, a coach I know very well. Jorge is my friend and one of the top coaches in the world.

“It was a pleasure for me seeing Pablo and Rodrigo Caio, another friend, doing really well in Brazil. I hope Pablo can help us.

“Pablo was courageous, not scared to try something big [by moving to Brazil]. It was the same with Jorge Jesus, to go to Brazil as a European coach.”

“I think it’s good, it’s good when you have a squad with a lot of quality and players. We have a game every week, you have to be happy with this,” he said.

“You guys know I played a lot of positions during my career. I’m always ready for that.”

Arteta: Villarreal have final-third players who can decide games

Or Mikel wants to taste Luizs maverick in midfield ? I know I’d be curious, plus Pablo brings a lot of what Luiz does uniquely in defence and you can balance him with another .
This could also put Xhaka more in the opposite half.
That last line is a bit suggestive of a discussion with Mikel

Throw him in at the deep end on Sunday please

bit of an understatement…

Anyone who can turn water into wine thoroughly deserves all the plaudits he gets.

I have. It was free though. Which… somehow made it worse! ?

It would appear from the picture that these two also did time together.

I will always like that Jesus guy. There’s a time they played Spurs in Europe be it a qualifier for the Cjampions League or whatever. It was the first leg in England and when they scored the third goal to zero, he held up three fingers towards the spurs bench.

it was so disrespectful towards Sherwood and his bench they had to be restrained but up to now it’s still among my favourites champions league memories of all time.

One too many fingers methinks

No. Two too many fingers. The middle one alone would have been just fine.

gooner, I had to look up this incident and the photos are hilarious. Tim Sherwood actually lost it

I don’t remember this. Really bought a smile to my face! The best line is where Jesus defends his actions…

“I was saying: ‘number three, Luisao, number three,” Jesus said, despite the fact that Luisao was wearing number four.

This downvote is proof of lurking Totensh** fans ?

Jorge Hey Zoos took the sacking of his friend AVB quite personally. Not sure what role Tim played in it all

Is Luiz begging to play DM via that last paragraph?

Or RCB, leaving space for Big Pablo on the left.

He wants to be on the pitch. Love his attitude. He would not be a good DM, though. Great distribution, but he’d be bypassed constantly.

I have high hopes for this dude

Of course he’ll say that. Used car salesman will tell you your lemon is a Ferrari. That said, good luck to Mari. hope he proves a surprise. BUT the whole point about being a big club is we minimise these sorts of risk on players. We have 8 Cbacks at the moment. One long term injured… Chambers and with suspect future. 2 are on loan – Saliba (unknown…paid a lot for not available this season) and Mavropanos (not ready) Mustafi and Luiz pretty much cut of the same cloth. The latter a panic buy ala Squillaci. Then we have Sokratis… Read more »

Hadn’t seen you on here trying to bring everyone down in a while. Thought (hoped) you had decided to piss off permanently. Oh well. As always, hope our players disprove your doomsday predictions.

Marco
Reply to  Guns Up

HAHA.Even forgot to mention Emre Can.??

Positive vibes, I like it.
SO much of the game is between the ears, anything to get these guys feeling positive, comfortable and confident is great.

Looking forward to seeing some football, especially now Arteta has had some more time with the lads – kinda hoping we’ll see the pitch being made better use of with hector and Pepe terrorising opponents down the right wing

The Christ himself lending a hand. That’s our wobbly defence sorted out then for eternity.

You’re in for a treat. I’m a Brazilian Flamengo fan and had the pleasure of watching Pablo Mari play in 2019. He’s a coach’s player, extremely professional, and tactically obedient. He’s not reckless like Luiz can be at times, so he will bring solidity to the Gunners’ defence. Wishing you the best…tired of seeing Liverpool’s undefeated streak!