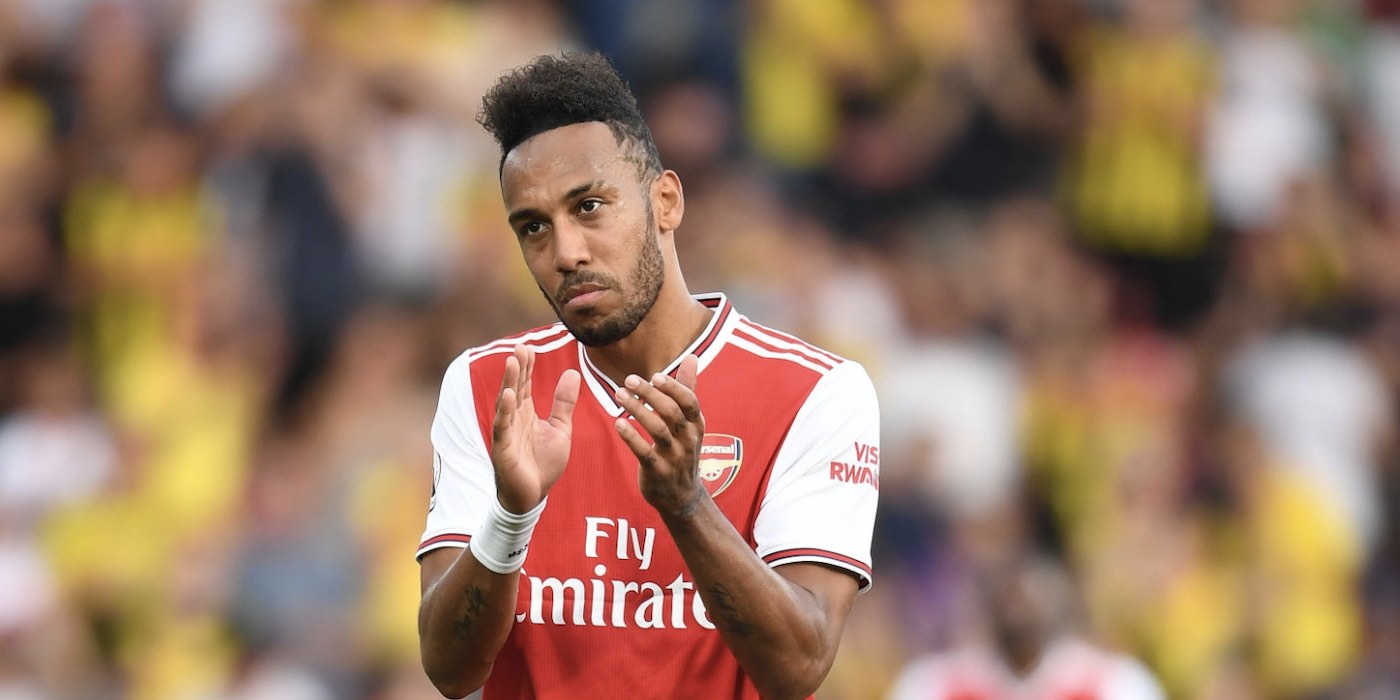 Mikel Arteta says it’s hard to assess Arsenal’s chances of persuading Pierre-Emerick Aubameyang to stay at the Emirates but admits it’s a conversation that needs to happen before the end of the season.

The Gunners have long been keen to tie down the club captain to a new deal, however, since negotiations stalled earlier in the year little progress has been made.

It’s no secret that Europe’s top clubs are keeping tabs on the striker, who will be out of contract in the summer of 2021, and that his wage demands could be problematic if we’re without Champions League football next year.

“We will have to do that at some stage before the end of the season for sure and we will see the intentions that we have,” he said.

“His intentions. Where we are sitting in that moment. I think it is difficult to predict that context right now. For me it is very easy. I want to keep him under any circumstances.”

The boss also touched on what he and his players have been doing to cheer up Aubameyang since the Europa League exit to Olympiacos. The striker missed a golden chance in the dying seconds to put us through and has said he feels responsible.

“He was down,” said Arteta. “He felt responsible for what happened. We all tried to convince him that even though he had the best chance of the game, he was the one who put us in that situation earlier.

“He’s done it [scored] on many occasions this season and last season. We need him happy, smiling and full of energy. That’s the way he’s looked for the last few days.”

Pretty sure it’s going to depend on if we make Champions league or not.

I hope this is not another captain leaving the club

Sadly I think it will be another captain leaving us. Our chances of making CL aren’t exactly great and any contract extension we discuss with auba right now will need a substantial pay raise. Heck even his current wages are difficult to manage on a europa budget. Not saying he’s worth every penny, just that we might not have too many pennies to give out come summer.

Sorry, meant to say don’t think he’s not worth every penny.

Agreed, and we have a chance of not even making the Europa League next season, given where we stand at the moment, so even more difficult to keep him if so, financially and from his point of view.

Whatever happens, a repeat of the Sanchez fiasco is unthinkable. If he doesn’t sign – he HAS to be sold and the money reinvested in the squad.

Sell Aubameyang for £55mill outside the PL, or
£70mill inside the PL

Put £80-£90million on the table for Richarlison.

Richarlison is class, he’s 22, has plenty of PL experience, and is a player on the rise.

Lacazette will be 29 and Aubameyang is 31 this summer, they’re players who’ll inevitably dip.

Selling the pair for £100-£110 million and punting the majority on Richarlison would be good business, particularly with the emergence of Eddie

He’s not class at all, looks like a street thug and not particularly bright, and would hamper development of Nelson, Saka, Gabriel M and ESR as well, who should be given a chance as he is a great talent. So no to him.

That’s why I said “he’s not class at all”. What I’ve seen of him at Watford and then Everton wasn’t so great. He was also bought for almost 40M GBP, do you think Everton would let him go for less than 80-90M? He’s not worth it. And yes, I can judge the appearance and demeanor. Take a look at Andrew and his comments about barrel looking winger from B'mouth, or the triangle shaped head guy from France we used to be linked with many windows. Can't remember their names for the life of me and I used to play FM… Read more »

Laca will be a force for Arsenal. Mark my words.

I remember when big players used to leave Arsenal for big money and I would get so mad. Now I kind of expect it and don’t blame them at all.

Oh how the mighty have fallen.

The club probably can’t afford to give him an ozil type deal with out CL footie, so unless we some how get extremely lucky and get in the top 4/5 or the club back tracks and decides to let him run down his contract so we have him for Arteta’s first full season, he’ll sadly leave us.

Rather get rid of Ozil and keep Auba. Shame because I’m a big Ozil fan.

It’s good that he feels responsible after that miss which, if buried, would have kept us in the mix for Champion’s League football. Maybe this will help convince him to sign again – along with his friendships at the club, the fact that he’s top dog here – he’d be second fiddle to Messi – and his obvious, reciprocated feelings for the Arsenal. If he leaves, however, he leaves. We’ve never been the sort of club to buy established stars and we have Eddie, Martinelli, Balogun and others coming through. We’ll be fine after a period of adjustment.

You’ve only to look back a decade to see how adjustment periods turn out. The Fabregas, RvP’s of this world are happy to play as kids but once they hit their prime, they move to clubs who are competing for titles.

Players come and go – sometimes to join rivals, sometimes because of injury. They are always replaced, because that’s how it works. So there are always going to be adjustment periods. Auba will leave one day – others will fill the void he leaves. I can’t see him joining a Prem rival though. He isn’t snakey enough

There seems to be too many factors going against us for the club to keep him. Granted that playing CL would be a huge plus, but even with that, is the club willing to pay a 30 year old top notch striker a sizable increase in wages? We took a loss for the last fiscal year, so maybe it is time to try and sell when the demand is the highest. This may allow us to strengthen other areas.(Primarily in the midfield where we lack the technical skill and dynamism of past players.) A gamble of course, but what in… Read more »

Come on guys it’s not like the end of the world. We survives when Henry, Van Persie and Cesc left. If he stays then it’s good, if he wants out it’s understandable. Just dont let him hold the club ransom, and if he does leave, use the funds crom selling him well.
Personally I’m not too fussed about him leaving wihile we have Nketiah and Martinelli. Apart from scoring he does nothing – part of the reason while our attack has been so disjointed. We desperately need money to buy elite midfielders.

I get you’re frustrated but never be under any illusion that it would be any easier without Auba. We need him for a host of reasons other than just scoring goals, can’t believe folks like you can’t see this. Suarez almost singlehandedly won the Mugs the league. RVP did that with Manure. Look out how Spurs are languishing without Kane. This whole dream that Auba is easily replaceable is frankly stupid. If Arteta’s team clicks, with Auba leading, we can do a Chelsea without European football. Even getting back to UCL would be great and we can then ease the… Read more »

I never say that it would be easier without Auba. Just that he is not that important. Last year he missed a crucial penalty vs Spurs, this year…So just dont pretend like he is some sort of saint who is above blame. Also I just feel something that is very wrong with our attack force to be honest. Auba and Laca just dont stick. Pepe is still hot and cold. I’m not even sure Auba is totally suited to our current personnels. The team plays like they just know each other for 3 days most of the time. So to… Read more »

While it might make some sense to cash in on Auba by the end of the season, I don’t think it would be wise. This is because every club knows he has just one year left and would probably refuse to meet our price tag(50-60 mill). However if he stays, he’ll probably get us CL footie next season. So as Mikel says…. Let’s keep him whatever it takes

I agree with you about him helping us aim for CL football next season.. but you must be kidding me if you think Auba won’t fetch 60m in this overly inflated market. Auba is a world class striker that even at his age, scores for fun. Heck we can see him backtracking for the full 90 and still seems pretty much ok, he’s a different type of athlete altogether and he will be wanted in the summer. I am all for having him stay though, his positivity and influence is infectious and i think we can see he seems to… Read more »

I see the world of silly excuses has resurfaced again today with Tim Stillman. 1) Something about Pepe being more world class than Reiss Nelson. 2) Something about Arteta’s system which means Pepe has less chance to counter attack and has to try and hug the touchline but he can’t. Firstly Nelson is slightly behind the curve than Pepe bc he is younger and has had less opportunities in first team. Nothing suggest he is potentially less world class and if Pepe is suppose to be world class, well he is hugely flattering to deceive with us. Secondly, a certain… Read more »

Probably going to lose him. He’s past 30yrs. in a team that cannot make regular CL and a rookie manager. maybe an unpopular thing to say but we are not veiwed favourably for good reason as well by other top players these days. No one wants to come to a team continuing to struggle to win over say Olympiakos or is having issues going beyond threading water in mid table. Our stock has predictably taken a hit since Wenger left. The old man had still some modicum of clout to sway certain deals his way. That may no longer be… Read more »

It’s nice to see our manager pull no punches and just be completely honest that he wants our best player to stay. Too much skirting round the edges these days.

hope he stays as I really like and rate him but we’ll see I suppose.

here’s to climbing up the table