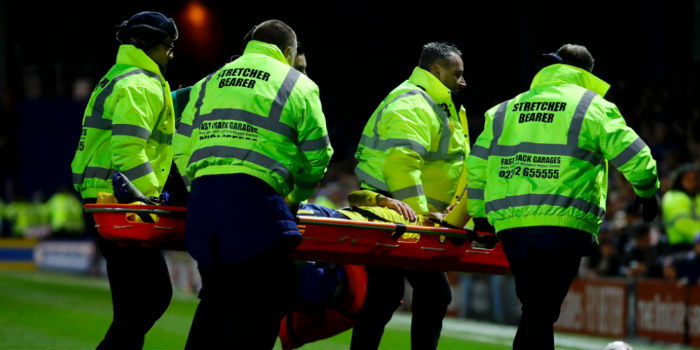 Mikel Arteta has confirmed that Lucas Torreira will see a specialist about his ankle injury.

Arsenal’s medical team confirmed this morning that the midfielder fractured his ankle during Monday night’s FA Cup win over Portsmouth.

The 24-year-old was pictured leaving Fratton Park in a protective boot and using crutches , however, despite the alarming look, his father relayed that he was optimistic that the damage wasn’t too bad.

That remains to be seen. As yet, no timeline has been put in place for his return.

Facing the media ahead of Saturday’s game with West Ham, Arteta said: “He was quite positive this morning.

“I spoke with him and he was in pain. We don’t really know exactly the extent of the injury. He needs to see the specialist tomorrow here in London and we will know more about it.”

Arteta also touched on the number of injuries he’s had to contend with since taking over from Freddie Ljungberg in December.

“For sure since I joined, the amount of things that happened [fitness wise] is enormous, but we just have to try to adapt,” he said.

“It’s part of football. It doesn’t only happen to us, unfortunately, it also happens to many other teams. So we cannot be crying about that. It is what it is.

“Sometimes it’s bad luck, sometimes it’s part of the game we play and sometimes things that we can avoid and do better as well but it is what it is.”

I’m liking the look of that team, nice to have left and right
footed cbs. But I have a bad feeling Arteta will bring Lacazeteback and put Aubameyang left wing and put Luis and mastafi back at cb…

‘’but I’d much prefer to watch the team you selected..

But I would prefer Mari to Mustafi, Pepe to play #10, Nelson RW, Auba up front, amd Martinelli LW.

What’s with all the minuses guys?! He said predicted, not preferred!

Is Chambers injured tho?

No he’s just got a ruptured anterior cruciate ligament

Put him on the pitch then. He’s had plenty of time off. In my day…

A real pity for Torreira. He was starting to look decent with Xhaka in midfield. BUT lets be brutally honest, here is another player whose value is over inflated by some much like the farcical invention of excuses that masquerades as analysis (no offense) by Tim today. Some players simply invite certain people to wank off on them to no expense on reality. Torreira is one. and I’m not saying he hasn’t been good, I like his tenacity and the way he ferrets the ball back. BUT his utility to the squad is many times exaggerated by those who in… Read more »

Didn’t read most of this tripe, but wanted to see how long it took you to mention Emre Can. On that front, I’m disappointed in you. Careful, Santori, lest you’re displaced by a superior troll.

Hope he recovers fully from this injury. It’s the sort of thing that can destroy a player’s career. Wilshere and Diaby were both plagued with ankle problems and never recovered to feature consistently. I’m worried for Torreira.

So assuming by nothing being given for fracturing Torreira’s ankle it would also have been OK for either of our guys to take care of that Bolton prick in a similar manner?