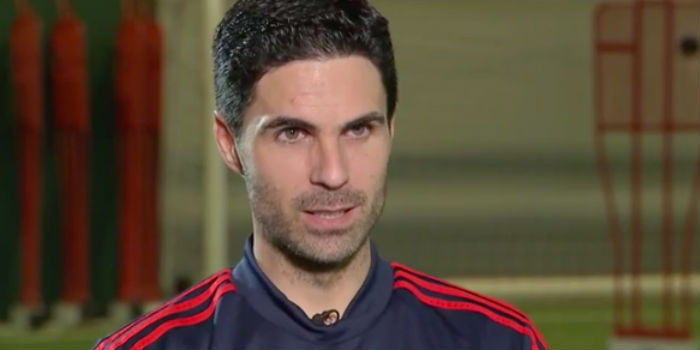 Mikel Arteta says he gave everything as an assistant to Pep Guardiola but admits he now realises you have to be a head coach to understand the rigours of the profession.

The Spaniard has been flying solo at Arsenal since late December and has barely had a moment to take stock.

In the space of 12 weeks he’s appointed his coaching staff, traversed a transfer window, played 15 fixtures and been on a mid-season break to Dubai.

Ahead of Wednesday’s trip to the Etihad, his first game against Pep Guardiola since his move, Arteta reflected on his new life and how he continues to stay in touch with his mentor.

Speaking to Sky Sports, he said: “I thought with Pep and City it was [24/7], I always felt it that way and I always lived the profession like this when I was an assistant. But you need to live being a manager to really understand the role.

“We are very much in contact, there are things you can’t forget quickly. He’s someone that is very supportive to me and we have a great relationship so obviously we talk.

“Since I was 15, he was captain of Barcelona, and he was a role model for me. Then we played together a little bit, we moved away, he did his life. Then we started to talk again and about the possibility to work together in England and we have spent a fantastic four years together.”

It’s well known that Arteta’s relationship with Guardiola was forged at the Camp Nou and that the pair stayed in touch despite geography separating them for more than a decade. Naturally, it’s assumed that the young pretender has been soaking up the philosophy, methods and ideas of his older friend.

“He certainly had an influence on me as a player,” said Arteta. “Then as a manager at Barcelona, the way he transformed that club and the way he made them play.

“Obviously, when you are with him every day you see why he is such a successful manager, why he’s won everything he’s won and why he always makes his team play the way he does.

“There are a lot of similarities to what I want to do but obviously everybody is different.”

Last year, City won the domestic treble and it was said that Arteta was the perfect candidate to step into Guardiola’s shoes should the Spaniard look for a new challenge. Having flown the coop, albeit to return to a familiar nest, that scenario, for the time being, seems unlikely.

“When you make a decision you have to be glad,” he said.

“I’m so happy that I am here and I’m so proud about the possibility I’ve been given to manage this football club and about the process we’re in, the buy-in from the players, the staff and the club and the trust they are showing me. What I had was fabulous but now I’m focused on here.”

The Sky Sports link is incorrect. That one’s for Teamtalk discussing Advocaat and Kokcu.

There is a video with Mikel saying stuff on that page :d. I thought the same as you at first.

For all of the talk of Arteta’s inexperience and scary things that happen in our world let’s all take a moment to enjoy the spuds. Levy was so obsessed with achieving dominance over Arsenal that he spunked all of his transfer funds on a shiny new toilet bowl and sacked the coach that miraculously achieved top 4 every year and a champions league final. In a vain and desperate attempt to win a trophy he hired a washed up Mourinho who has destroyed the club in less than a few months and Leipzig (a team in the fifth division a… Read more »

When there was talk of Moureen maybe becoming our manager/coach. I lost it; totally lost it, to the point where I said? that I would stop supporting the Arsenal if that were to transpire…AHhhhhhh!

Safe to say that, after the last season and a half, we’re happy to have Mikel here too. Beating City tomorrow would be a nice little bonus but I’m more interested in what he has planned for the coming season and beyond.

May your reing be long and successful at Arsenal, Mikel! Hope we don’t lose you to a Barca as soone as we win something with you.

Agreed! I came here to post something similar. I hope Arteta goes on to have a cracking managerial career at the Arsenal.

I mean Arteta has to win something big for Barcelona to hire him. At that point I imagine Arsenal would be content to let him go.

Rijkaard, Guardiola, Vilanova and Enrique won nothing before managing Barcelona. Martino and Valverde won the league in Paraguay and Greece respectively, while Valverde also won the Community Shield equivalent. To further debunk your suggestion, the two managers who achieved even a tiny bit of success prior to appointment were the least popular.

So hopefully a bit of success for Arteta will help ward them off, and everyone can be happy.

Its simple really, well in my head anyway.

Arteta wanted to step away from city to come to Arsenal to really test himself. Its alot easier to take a winning team and continue it than it is to build a winning team. Had he stayed at City and taken over, it would always have been said ‘Pep made that team’

﻿I always wanted him to be our manager. Thanks for the transformation so far, hope to see more upward growth and development of our great team.

I love how mikel always talk of himself and his role as that of a manager. Never the head coach narrative that emery preferred and the subsequent lack of ownership and leadership he displayed.

Well spotted. Make one think if that was part of the reason Gazidis backed out from hiring him the first time.

I hope Arteta does well and wins every game left this season with a 7-0 score. Since he has arrived the results have definitely improved, but the performances on the pitch are just not good enough. We went on a 20 game unbeaten run under Emery with many lucky wins and draws. Everyone was praising Emery, but the performances were weak, and you could see all the cracks in the team. Since Arteta arrived apart from the 2-2 draw with Chelsea, I can’t remember any game where the performance really stood out against the opposition we faced. The Man Utd… Read more »

Not expecting much from this game, but hopefully we can put in a good performance against a strong city team. I’d take a point but more
important is to see a better attitude against top opposition than previous regimes.

I was in a lousy mood, then I saw the CL results and just started laughing. Nobody deserves each other more than that club and that manager.

As mentioned, Arteta had the protection on the coat tails of Guardiola when at City. Very different having to man manage yourself. This is a less quantifiable element which is equally if not more important to just tactics alone. You have to be able to ensure your tactics are followed through, players are not robots and they will have to be catered to their various specific characteristics and character. Which is why I always said criticism on Wenger many times was overly harsh and simplistic at best. He suffered from his own strengths in trusting players to do what was… Read more »

was that photo taken when he was a player or coach??