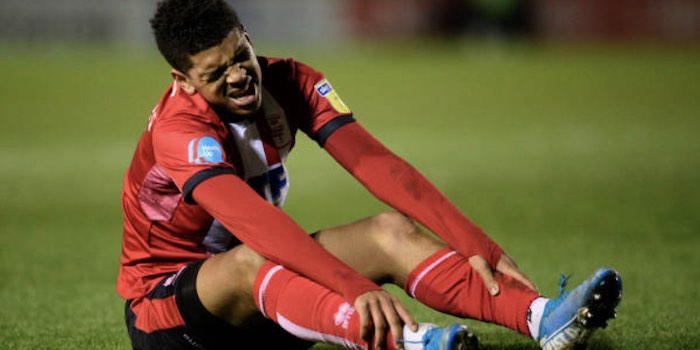 Arsenal’s young striker Tyreece John-Jules has been ruled out for the rest of the season having suffered a broken bone in his foot.

The 19 year old joined Lincoln City on loan in January, making seven appearances in League One and scoring once since then.

However, he picked up an injury in a friendly game against Sheffield United last month.

The Imps boss Michael Appleton said, “It was the day we had the Sheffield United game. He got a kick on the top of his foot.

“The initial X-ray didn’t show anything, but that can happen with those types of injuries. He then had an MRI scan and last night we found out Tyreece has a slight fracture to the tarsal bone.

“It looks very unlikely that he’ll feature again this season. It’s a massive blow, for him, for us the players, the squad, everybody.

“First and foremost, I hope he gets himself sorted as quickly as he can.”

As is usually the case in situations like this, John-Jules will return to Arsenal for his treatment and rehabilitation, so fingers crossed he makes a full recovery quickly.

As for Lincoln, they currently like 6 points above the relegation zone, but the lack of firepower might be an issue between now and the end of their season. Good luck to them too.

Good luck for the recovery. Hope you come back stronger.

Sheer bad luck it seems, the problem is the Arsenal players have in recent years been on the receiving end of so many thuggish assaults I immediately think that he was ‘taken out’ by some orc…

The fact that it was Sheffield United makes me think that way, but it was probably an accident?

We’ve had a terrible year, what with Ballard and recently Olayinka, Torrieira, Chambers, it never ends.

We’re gonna need a bigger treatment room if Stan can afford it!