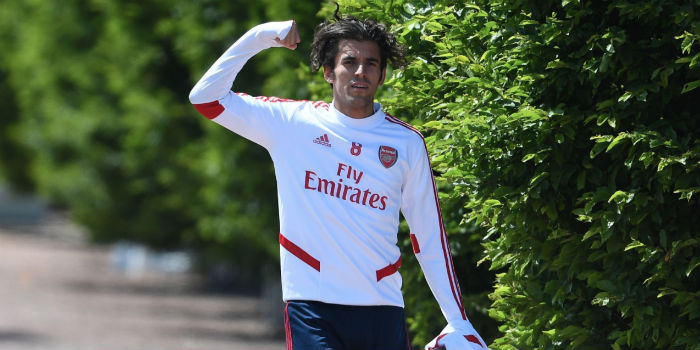 We have the first photos from an unlocked London Colney as Arsenal’s first team squad were put through their paces in small groups by Mikel Arteta’s coaching team.

Premier League clubs gave the green light to strict health and safety protocols on Monday meaning players and staff, after they were all tested for coronavirus, were allowed to start training in small groups on Tuesday. Social distancing measures remain in place and sessions are capped at 75 minutes.

Judging by club snapper Stuart MacFarlane’s pictures, the players look, on the surface, to be in decent shape. If any of them have been on the pies behind closed doors, they are doing a decent job of hiding it.

The big talking point – and don’t say we’re not a bastion of hard-hitting journalism – is the hair.

Unlike us mere mortals who tend to go at least a month between trims, Premier League footballers always seem to have barbers on speed dial. Their follicular experimenting is legendary.

However, denied access to their usual tonsorial artists, a few of our lads look like they’re verging on unkempt. It’s quite a sight.

Hector Bellerin shaved his head at the start of lockdown. Typically, it looks great. Kolasinac and Mustafi appear to have followed suit, possibly with cheaper clippers.

Not too long ago, Cedric Soares – an Arsenal player, in case you forgot – revealed that he’d had his hairdresser teach his wife barbering basics over FaceTime so that she could sort his hair. His side parting is as organised as a George Graham backline. Well done that man.

Finally, there’s the boss. How does he do it? Not a hair out of place. Still dense and luscious and lego-like, it truly is a wonder of the world.

Anyway, here are a few of the best pics.

Most of the players barnets look like someone tried to draw them from memory.

Also, how come when Hector shaves his head, he looks like a bad ass, but when I shave mine, I look like Brian Glover?

the boss probably has a computer buried underneath his scalp that is programmed, so that hair stops growing after reaching a certain length, and in the rare occasion where one or two hairs falls out of his follicles the computer will send signal to replenish said lost hair within seconds

The squad emerge from their homes with ragged and unkempt barnets, while Arteta’s hair remains set and immaculate as ever. Unbelievable.

Looking at Ozil reminds me of World Cup 2010, when he ripped England to pieces in South Africa. Come on Ozil if you must see our tour contact, let it be in true Oziil number 8 style, I’m a Gunner hopefull you can regain your style now your hair is back in place.

Just about the only thing Ozil and I have in common was that our best performances at work were 10 years ago.

Loving the smile on the boss face!

I read a report that Alex Song had to sell his car as the fuel consumption was too high. He lived in Radlett, 2 max 3 miles from London Colney/Shenley. He must of had a Daurice in Inverness!

Makes you wonder just how much of their wages goes towards getting their hair cut.

I just read on ‘The Blog’ that Blogs himself wrote that Papa ‘looked like he was deciding to rip the spine out of someone’.Funny,indeed. I have a Greek mate who, when Papa first signed for The Arsenal, said that Sokratis was the kind of guy who bites heads off goats.. Thought some of you would appreciate that one. Keep well everyone- it’s gonna be great to see some football again soon, no matter what the circumstances may be

Reiss Nelson looks “positively wild”, dwl. Mate, did you proofread your entire article before submitting it? It’s unintentional but hilarious, thanks for the chuckle.

I Literally just had to google who 17 was, I’d genuinely forgotten