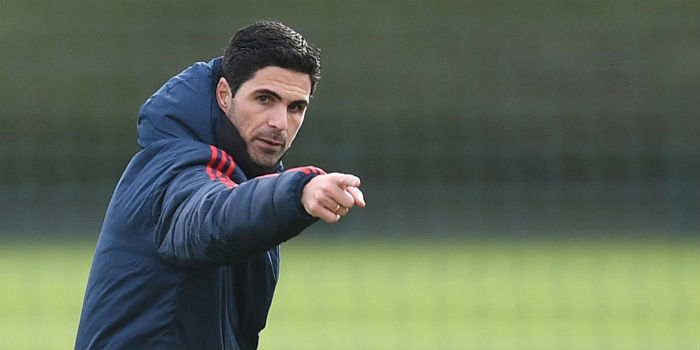 And we’re back. Well, nearly.

According to The Telegraph (£), the Premier League will restart after its three-month hiatus with Arsenal travelling to face Manchester City at the Etihad on Wednesday 17 June.

The fixture has already been postponed twice this year; first because Pep Guardiola’s side reached the Carabao Cup final and then again when Mikel Arteta tested positive for coronavirus on 12 March.

The boss’ diagnosis proved to be a tipping point for English football with the Premier League swiftly cancelling the following round of fixtures. There hasn’t been a top-flight match since.

That we’re heading to the Etihad suggests the authorities’ preference for the final 92 games to be played on neutral grounds has been ignored.

Once we’re up and running again, the games will come thick and fast. On the same night we’re playing the reigning champions, Aston Villa will take on Sheffield United. It’s then expected that a full round of fixtures will be played the following weekend with Arsenal taking on Brighton at the Amex. The aim is to complete all league fixtures by 2 August.

It’s not clear at this point how FA Cup clashes will fit in. We’re due to face Sheffield United in the quarter-finals at some point.

It will be bizzare watching us play again. I dunno how invested we will be in all this given the way our season has went. With a lot of teams getting back key players from injury, I dunno if our CL chance has all but gone away (if that’s even happening next season). But I hope that nothing serious comes out of this “Project Restart”. Last thing we want is another outbreak to happen within the PL teams during this.

Shit I even forgot we’re still in the FA cup…

Surely they should just scrap it this season. Cut the trophy into 8 pieces and hand 1 to each quarter finalist

How about a Zoom meet with the Trophy? Each of the 8 teams gets 5 minutes of trophy-to-face time, making for a 40 minute ceremony.

Awful, with games every 2 hours as well people will gather in large groups all day. All the while the UK has the largest amounts of unnessesary deaths IN THE WORLD. As a nation we are shit.

My Arse-nal
Reply to  Ya Gooner

The USA have far more deaths than the UK. Also with pubs still not being open in the UK that should help a lot with people not gathering in large groups to watch games all day.

Ya Gooner
Reply to  My Arse-nal

There’s an article in the ft today saying the uk has the most unnessesary deaths, that is not the most deaths but the most preventable deaths. It’s because our government was slow to react and now they’re too quick opening everthing up. They’re putting money over lives and no one seems to care. We have a selfish society.

People will still gather around one another’s houses because of the heavy world cup style schedule.

Frank Bascombe
Reply to  Ya Gooner

Ya Gooner, the airports are still open mate.

Ya Gooner
Reply to  Frank Bascombe

Yes I know I moved abroad and now unfortunately I have to move back due to losing my job because of corona and yes I willself isolate for 2 weeks. All I’m saying is time will tell, we all know the consequences, I didn’t think this was that serious either until a late march early april.

Pearson
Reply to  Ya Gooner

I think the UK should shut down forever. That way you will not be terrified of your own shadow, you will be indoors forever. Enjoy!
C’mon Arsenal, let’s beat them now!

If this “easing” of the lockdown is too premature, you may get your wish.

I’ve been balls deep in work and my buddy texted me “Good luck with City”. Huh, I had no idea this had been reported…clicked on my Arseblog favorite and there it was within seconds, love it!

Hello Gunners, I’m thinking this game after corvid 19 will be our big away win this season. Fresh from rest and confidence in the house. Go all the way Gooners

The uncertainty of it all makes this as good a time as any to play Man City away.

No doubt Ozil will be injured first this one!!

Ozil will not come out of quarantine, he is terrified of getting a virus from his own shadow

I am confident. We have not conceded a goal for over two months!

Simeon
Reply to  A P

Neither have we scored any ?

They will be rusty.