Despite the fact the world is in lockdown and crisis, and football is up the creek without a paddle, some things remain the same.

Transfer rumours, for example, are continuing as if nothing much has changed and everyone will have tens of millions to splash around when the market opens again.

So too kit rumours and leaks of upcoming shirts. This is less surprising, because even if football clubs won’t have a lot of money, the chaps still need to wear kit as we’re not yet ready for the flappy sight of nude Premier League.

As ever, the lads at Footy Headlines have the picture, and this is what they believe to be the Arsenal away kit for next season (whenever next season happens). 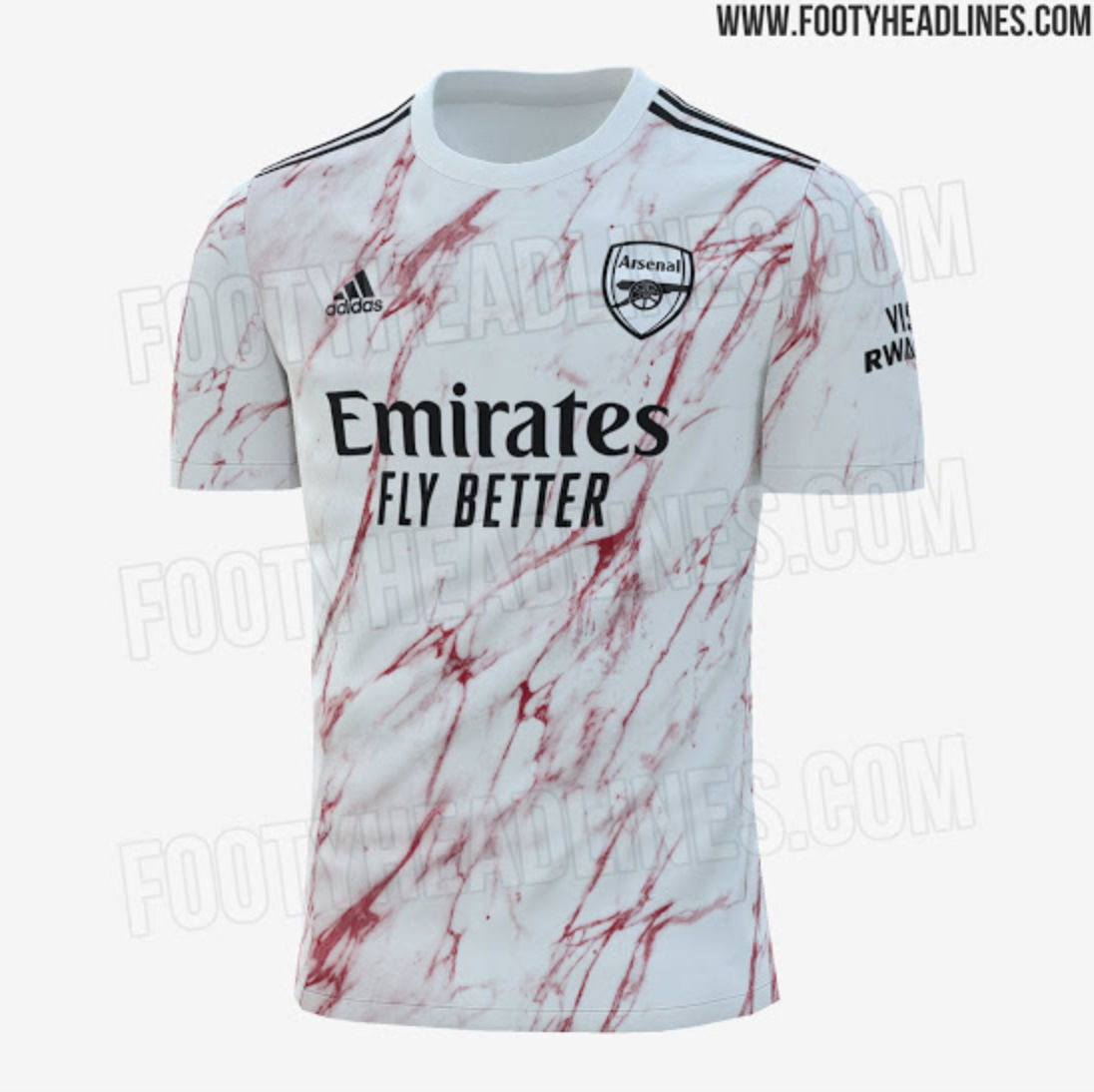 Arseblog News was told some time ago that white and maroon would be key components of the upcoming away kit, but the addition of what appear to be blood splatters is not quite what we were expecting.

Nevertheless, our shirts are soaked with the blood of our enemies, and from there it will seep into the very ground itself as they return from whence they came, brutally dispatched to seek forgiveness from their gods and to avoid their own eternity in the fiery depths of hell … after a comfortable 2-0 win for Arsenal (Aubameyang 31, Tierney 72).

Of course it remains to be seen if this officially the kit. There is a hint of training kit off it, so it might be that. We’ll see.

Previous articleArsenal Women fined £50,000 for ‘act of discrimination’ in 2014
Next articleReport: Arsenal to face Man City in 20 days time

What do we think about it given that it is white…? Haven’t made my mind up yet.

Are we trying to be gangs of London? ?

Wow. Um. Not entirely sure the splatters are good, but I guess I’ll be OK wolfing down my chips and ketchup / paella / bolognase / in this.

After further consideration, I think it would be more appropriate if we offered this design to Newcastle for their “Turkish Embassy” inspired third kit.

Get Mustafi printed on the back of the shirt for the full Zombie experience.

this needs to be stopped

I love this. Training or away kit, I’ll be getting it

Hmm not sure this would be a good shout, especially given the Visit Rwanda sponsorship. A bit redolent of the genocide.

Our home kit is completely red, which must mean it represents even more gory blood than this kit?

Should we just ban red kits? And the colour red in general? in case it offends someone?

We’ve managed to produce a generation of people who look for stupid things to be offended about, because they believe in expressing their outrage, it demonstrates their virtues.

Well done on missing the joke

Oh, Rich, just say something about how Ozil is not worth the money and leave us alone.

Rich your name is elitist and it offends me

Can I call you Dick instead?

Not entirely sure what to make of that Blogs, suffice it to say there was very good reason we stopped wearing white tunics in the ED some time ago…it’s not a good look…
Please God let someone be messing with our heads. Yellow. It should be yellow! But not with red splatters ….

Bruised banana followed by strawberry ripple. How lucky am I?!

It looks like a nice fashion item if you are wearing it as a fan. I loved seeing the team in the traditional yellow away kit this year though. What a shame it was wasted on a throw away season.

Is that a picture of the one they sent to Dexter Morgan?

no one else realise that its in homage to highbury and the marble halls?

If no one sees that, and instead see blood or ketchup, then it’s not a very good homage.

Perhaps they could change the colour to blue to avoid confusion.

I eventually caught that, too. But if this is a thing, you know it’s gonna get a blood inspired nickname.

I’m so confused, I saw this and thought “Good old Arseblog, with the jokes, clearly this isn’t the actual kit it literally looks like it’s covered in blood splatters”.

But now I’ve seen it all over twitter as well….

No, I’m sticking to my gut feeling, this isn’t real.

So we play in red and white….and somehow an away strip of white and red is proposed? That’s not sensible.
And the fact that it’s godawful is a bit of a drawback too.

It’s so the 3rd kit gets more air time, then they can sell more of those too

This is truly disgusting. I will order.

Adidas are on a different level to Puma.

Or watching the walking dead

I’m starting to think signing with Macron would have been the better option.

I’m usually the guy that likes the outlandish shirts that the “propa fans” deride.

But to me this is our worst kit for some time.

It legit looks like fake blood to me. What kind of absolute clown goes around with a shirt with fake blood on it. Ooh look at me I’m hard. Its embarrassingly style averse and actually kinda makes me think of self harm (in general not that I would cut myself over hating this shirt lool)

I guess you could say its likenrasberry ripple ice cream but still wtf like.

Oh and also, I really like it. I hope this is genuine.

Doug I’m sorry. You’re insane. Marbelling enthusiasts like you must be real thrilled.

Death by a thousand cuts??

Hahahahahaha!! Omg this kit is amazing. I just wish martin keown was playing for us now in that kit with his bloody bandage wrapped
around his head, and is psycho eyes looking at opponents. Hahaha

I actually like it, looks pretty badass, kinda like if a rival’s blood spattered on it (even more so if is a spuds player blood)

I can imagine someone like Papa looking menacingly at rival players, giving them the evil eye and a smirk that says: Your blood will end on my shirt as well

God I hate this. How did we go from bruised banana to this:(
Yellow kit >>> white kit

Wow, incredible piece of writing, I laughed so much, well done?, just hilarious

Oh, great.. Walking Dead FC is going to go absolutely mental when they realize we decided to nick their kit design.

Maybe it’s a homage to Sir Chips Ketchup? Apologies if this has already been mentioned… I’ll just grab my hat…..

Is it not a marble effect which hints at the marble halls?

who had a nose bleed over a plain white shirt?

This website uses cookies to improve your experience while you navigate through the website. Out of these, the cookies that are categorized as necessary are stored on your browser as they are essential for the working of basic functionalities of the website. We also use third-party cookies that help us analyze and understand how you use this website. These cookies will be stored in your browser only with your consent. You also have the option to opt-out of these cookies. But opting out of some of these cookies may affect your browsing experience.
Necessary Always Enabled
Necessary cookies are absolutely essential for the website to function properly. These cookies ensure basic functionalities and security features of the website, anonymously.
Functional
Functional cookies help to perform certain functionalities like sharing the content of the website on social media platforms, collect feedbacks, and other third-party features.
Performance
Performance cookies are used to understand and analyze the key performance indexes of the website which helps in delivering a better user experience for the visitors.
Analytics
Analytical cookies are used to understand how visitors interact with the website. These cookies help provide information on metrics the number of visitors, bounce rate, traffic source, etc.
Advertisement
Advertisement cookies are used to provide visitors with relevant ads and marketing campaigns. These cookies track visitors across websites and collect information to provide customized ads.
Others
Other uncategorized cookies are those that are being analyzed and have not been classified into a category as yet.
SAVE & ACCEPT
wpDiscuz
58
0
Would love your thoughts, please comment.x
()
x
| Reply