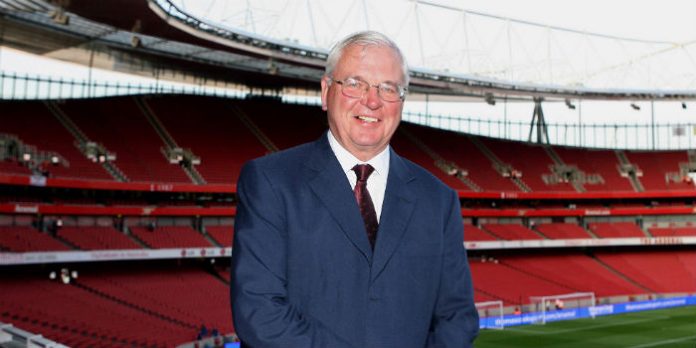 Arsenal have confirmed that Sir Chips Keswick has retired as chairman.

Sir Chips, 80, took over from Peter Hill-Wood seven years ago having been a club director since 2005. The Eton old-boy had previously worked for Hambros Bank for a number of years.

A statement released by Stan and Josh Kroenke on the club website reads: “We would like to express our immense gratitude for everything Sir Chips has done for Arsenal Football Club as a board member and chairman of the board over the past 15 years.

“His extensive business knowledge and experience coupled with his deep love of Arsenal have made him the perfect chairman. It has been a privilege to work with him and he will always be a very welcome visitor when we return to playing matches at Emirates Stadium.”

With his role little more than ceremonial following the Kroenke’s takeover, Sir Chips says that he’d already informed the club of his intention to step down at the end of the season. For whatever reason, he’s decided to stick to his original timeline, rather than see out the final months of a campaign that is set to restart in three weeks time.

Given the advice in the UK is for people over 70 to stay at home while the threat of coronavirus pervades, it’s perhaps unsurprising.

“It has been an honour to be the chairman of this great football club. Arsenal has always held a special place in my life and that will remain the case in the future,” said Sir Chips.

“I made my plan to retire at the end of this season clear to the board, before the global health crisis we are now experiencing. The club is in safe hands with Stan and Josh, the board and the executive team.

“I know Arsenal will emerge strongly from this situation and I look forward, like all our supporters around the world, to seeing the team in action as soon as possible.”

For the time being, it looks as though a direct replacement will not be made. The club instead confirmed that the board will be composed of Stan Kroenke, Josh Kroenke, Lord Harris and Ken Friar. One wonders if there might be room for a certain Frenchman one day?

So long Mr Chips, we wish you all the best with your retirement.

I’d love Arsene back in a directors role.

I’d also look at adding Pires to the board as well.

Many fans have made the point we don’t have enough football people in the boardroom, and if Arsene was appointed to the board of any other of the 19 PL clubs? It would be seen as a major coup.

Arsene said recently he’d never come back, but I think enough time has past for the dust to settle, I’d have him back in a heartbeat.

Thumbs up if you’d have Arsene back?
Thumbs down if you think it’s a bad idea?

A nice idea, perhaps in a decade, in our dreams. But not in Arsene’s character to give up on a role he’s just started or for him to come back so soon and cause friction at the club.

But I agree Arsene Wenger derangement syndrome amongst some of our fans, is a very real thing.

It’s a bad idea and would undermine the current Manger whoever that is.

Since the role is pretty much ceremonial, Bob Wilson should take over. Would do wonders for for fan relations (Chips always seemed like a typical eaton boar)

Keown surely?? With the new white kit. Everyone will fear us.

What a fantastic suggestion.

Good riddance. May he never be involved in Arsenal’s affairs again.

I’m not quite sure why to be honest. What’s to like? An elitist banker, born into fortune, contemptuous of common people and ever eager to carry water for Stan.

Frank Bascombe
Reply to  Will

Peter
Reply to  Will

Ran hambros in to ground years ago, hopeless chairman and even worst on the board before it . Eton numnut good riddance

With regards to the penultimate sentence, do you mean Mathieu Flamini when he buys out Stan, Blogs?

I assumed he meant Nasri. No?

Flamini is the billionaire. Nasri is just washed out

Sylvestre got some experience leading to boards with a club in France.

I thought he meant Pascal Cygan.

I will mourn the loss of the massive chip with the top hat and monocle in David Squires’ cartoons, but not much else.

I’d be fascinated to see an Org chart for the Arsenal hierarchy. Like, do the opinions of non-Kroenke board members even matter?

Well one thing is certain – aside from the fact that Chips has never held any notable shareholding – if any – and so cannot be held to blame for the ownership situation, whatever you think of that – that Board desperately needs some new blood to spark it into life. An ex player of some standing and one of our ex women’s players as well, would at least give some fresh input. The suggestion of Wenger is a bad idea, because it would mean the press playing him off against whoever is the current Manager. It’s why ex Managers… Read more »

While we’re at it, what with the women players, let’s have some vegans on it.

Good shout with a former women’s player on the board – progressive, adds a different dynamic, someone who knows what’s to be done in the women’s game. It’s embarrassing that someone could ridicule that.

Chips was a useless director , ran a bank in to ground and got away with it long ago . Estonian postioning . Good riddance

At LAST!!!! Some good news this season. Now let’s get rid of Stan, Raul, Vik, and the rest of the useless bastards and bring back David Dein and Wenger upstairs.

Please put on the other side of a stamp in as many words what this bloke apart from his catchy name brought to our club.. ?

He isn’t French, he’s a Gooner.

Dont wish anybody bad and I agree he clearly is a fan but he used to speak about fans like we were something he’s trodden in. I’ll miss not having a chairman that cares but the guys a c u next tuesday as far as I am concerned.

If we do replace him, could we not have a toff? Nothing against Sir Chips himself, but it isn’t a natural law that only rich posh people can be chairman of the Arsenal.

A certain Frenchman would be wonderful, but it will never happen. He will be too old by the point enough time has passed for the manager to not feel undermined.

Plenty against chips useless chairman and terrible business man before that . Let see who Stan and Josh appoint next , it’s a worry