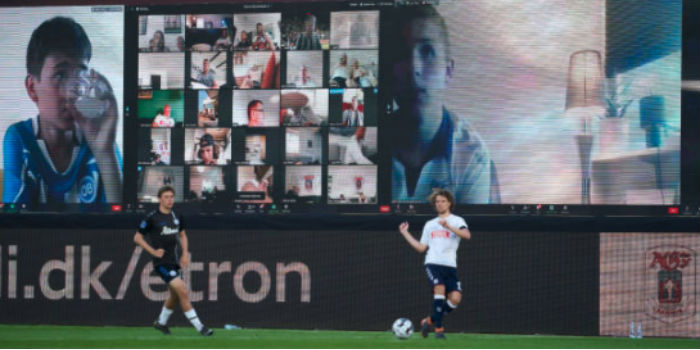 With Covid-19 meaning supporters are not allowed to attend games in most of Europe, clubs and leagues across the continent have been weighing up various ideas to create a faux-matchday experience.

Borussia Moenchengladbach earned significant column inches when they confirmed fans could pay €19 for a personalised cardboard cutout to sit in the stands and the Premier League has reportedly weighed up CGI animations.

Last Thursday, Aarhus took the plunge with their virtual stands (video here). A 40-metre long screen was placed alongside the pitch and supporters on webcam watched the action in real time.

Against the backdrop of various living rooms and unflattering nasal shots, Aarhus secured a place in the Danish championship play-off with a 1-0 victory.

When Peter Hoest, Arseblog reader and Vice President of Arsenal Denmark, saw the Guardian reporting on Aarhus’ innovative option last week, he called the club to congratulate them. It was then that he learnt the Gunners had already been in touch to discuss. He shared the news on Twitter.

Obviously, the long-term goal is to get supporters back in the stadium, however, with nobody quite sure when that will be, it wouldn’t be surprising if we’re open to experimenting with other options. We tried the North Bank mural and Highbury was an early adopter of the Jumbotrons. Perhaps it’s time to combine the two?

It’s Arsenal fan tv…but not as we know it.

Not meaning to sound overly negative during what’s a difficult and strange time for millions of people but what exactly does this add? It seems like a lot of work for something that’s effectively worthless right?

Why are people so worried about showing games of football in empty stadiums? I’m sure the players will cope just fine and likewise I’m sure fans understand things are batshit crazy at the moment and this is a case of just trying to get this season finished in as fair a way as possible.

Its fucking irritating, stop being so precious.

Because the point of football is so fan’s can watch? If you can think of innovative ways to get fans involved why not try it out.

I understand that, but I don’t see how this makes it more watchable for fans? The idea of showing more games on TV (including on the BBC from what I remember) is a great one as it will let people watch the game and hopefully stop people from either going to a stadium or going round a friends to see the game.

Seems like a little crowd noise makes the experience a lot better.

Fans getting involved is good. But in our case we have an advantage here. Our fans are the least vocal fans when the team needs us, so with no fans in the stadium won’t make any difference for us. Remember when they called Highbury the Library?

Ya Gooner
Reply to  ChrisM

They’re just looking for a means of monatisation

ChrisM
Reply to  Ya Gooner

I suspect you might be right. I wonder if the pandemic will lead teams to implement any organisational changes that make them a little bit more robust.

Had a look at that video link for the virtual stands and it was delightful to see the reactions of fans after the teams equaliser. I like the idea, and I like the fact that we are the first club of all the other in the prem to think of the fans in this way.

It is the little things that make a difference.

I have to say, I really like what Gladbach have done with the cardboard cutouts of fans in their stands. It looks pretty cool from afar (the wide-shot angles for TV), it’s not cheezy in the way CGI animations would be, and it feels like a nice way to honor the fans while still acknowledging the reality of the situation.

goonerink
Reply to  Timorous Me

plus they have club legends and so on, which would be great.

I’d imagine there must be some sort of financial incentive in it for Arsenal. Perhaps charge fans a few quid each to log into the zoom stream. Have some advertisements on some of the screens. Otherwise it all just seems like a pain in the Aarhus.

If something like video screens with fans faces help improve the performance of the players while enhancing the fan experience (say offering a view similar to their seat the ground), them I’m for it. If it’s just virtual screen to make the stands look full on TV, it can f*** off.

Who’s going to be the first one to get their Micky out when on screen then, because I guarantee that will happen at some point.

I wondered about that too when I registered for a ticket, turns out they have mods watching the paying customers. So in theory you could get your Mkhi out briefly but your feed would be cut before the cheese is fully visible.

Tapps
Reply to  My Arse-nal

I hadn’t thought about that until I read your comment. Now I’m determined to be the first!

Richie
Reply to  My Arse-nal

Or worse, someone in a Spurs shirt. The filth on web cams these days……

…. and the difference between that and having a dick on the screen is…?

That is the worst idea ever

Accidentally hit post too soon, but who exactly benefits from that?

Half the faces are too big and the other half are too small. Plus you can still see the empty stands, there’s no immersion at all.

It looks terrible for those watching at home, and it must be utterly annoying for the players.

Not even for the audio reactions… the video suggests they used recorded chants like in video games. Which is not a bad idea by itself, though.

What’s the problem with aftv? Not all of them are morons..Lee judges for instance is a quality, honest fan/ pundit. There is a lot more too. Dt is the only real prick on there

Most of them are embarrassing

I can’t see Sky wanting to show AFTV commenhators on their coverage.

I had a ticket for this actually, but as the little one was being a nightmare at bedtime I wasn’t free until 8pm so just fucked it off to play Red Dead Redemption 2 instead.

How about bringing back the mural?? If you don’t get it, your probably under 40

They’ve had the mural at the Emirates since 2006

Seriously, what a load of old wank. Just play the games and get this nothing season finished if that’s what people want.

This will never be as good as Arseblog Live